Volatility in the U.S. labor market during the COVID-19 pandemic has produced many challenges for employers and laborers alike, and the teenage labor force is no different.

In 2020, when much of the economy was shut down or operating at reduced capacity, many of the industries that were hardest-hit were also those that typically employ a higher share of teens, like food service and retail. As a result, the summer of 2020 saw a noticeable downturn in the share of teens who were working, nearly eliminating the modest gains in teen employment since the Great Recession.

More recently, employers have been experiencing a shortage of labor that may provide new job opportunities for teenage workers. Many of the positions that employers eliminated last year are now the ones that employers are struggling to fill with quit rates at historic highs and the overall labor force participation rate still well below pre-pandemic levels. And with employers raising wages to attract new hires, teens who are looking for work stand to benefit.

Despite current conditions, it appears unlikely that teen labor force participation will reverse a decades-long decline. Trends in teen employment tend to be seasonal, as more teens are able to work in the summer, and cyclical, as employers are more likely to hire entry-level workers when the economy is good and cut those positions in lean times. Even after accounting for these variations, the downward trend in teen employment in recent years is unmistakable. Looking at statistics dating back to 1948, teen labor force participation peaked at nearly 60% in the late 1970s, and more than half of teens were working up until the turn of the century. Participation dropped to around 35% in the wake of the Great Recession and has remained fairly flat ever since. 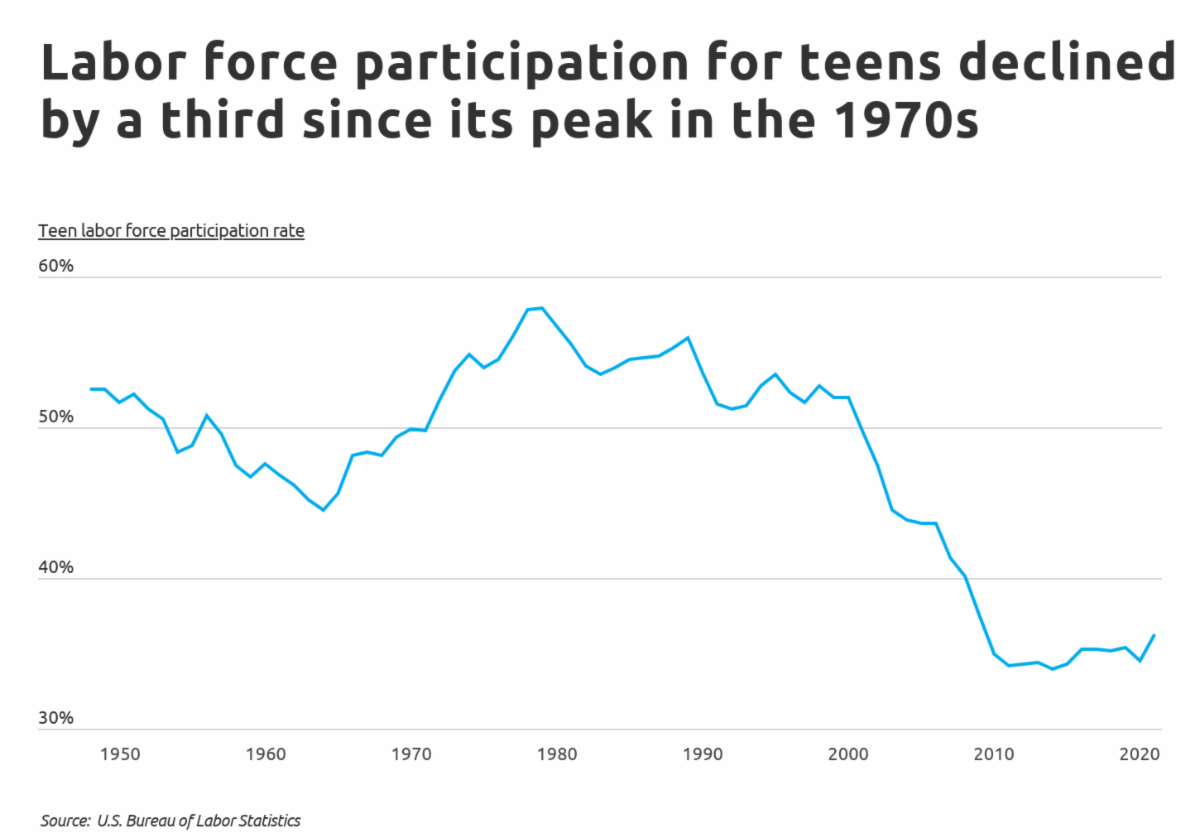 Researchers have identified several explanations for why recent generations of teenagers are working less than their predecessors. One of the primary factors is that young people face more time pressure from school, which has made it difficult to work during the school year. In the summer, extended school years and programs for remediation or enrichment similarly pose obstacles to working. Additionally, employers today offer fewer of the low-level positions for which teens are qualified, and teenagers face more competition for these roles from older workers and immigrants.

One additional factor in teen employment is the minimum wage. Because teens have fewer specialized skills and less work experience, employers usually pay them at lower levels than older and more experienced workers. The federal minimum hourly wage has been set at $7.25 since 2009, but more than half of states have introduced minimum wages above that standard. Recent years have also seen nationwide campaigns to raise wages to $15 per hour or more. In jurisdictions where minimum wages are higher, there is some correlation with lower teen employment, as employers looking to save on labor costs may decline to hire younger workers. As a result, further increases to minimum wage standards would benefit the teens who do work but could also lead to declines in teen employment overall.

State level data shows that wages are not the only factor that determines teen employment. For example, Utah and Mississippi both have the lowest possible minimum wage of $7.25 per hour. Utah leads the nation with a 53.2% labor force participation rate for teenagers, while Mississippi has the second-lowest rate at 25.5%. In general, most of the states with the highest teen labor force participation are found in the Midwest and Mountain West, which may be a product of demographic, economic, or cultural factors in those states. 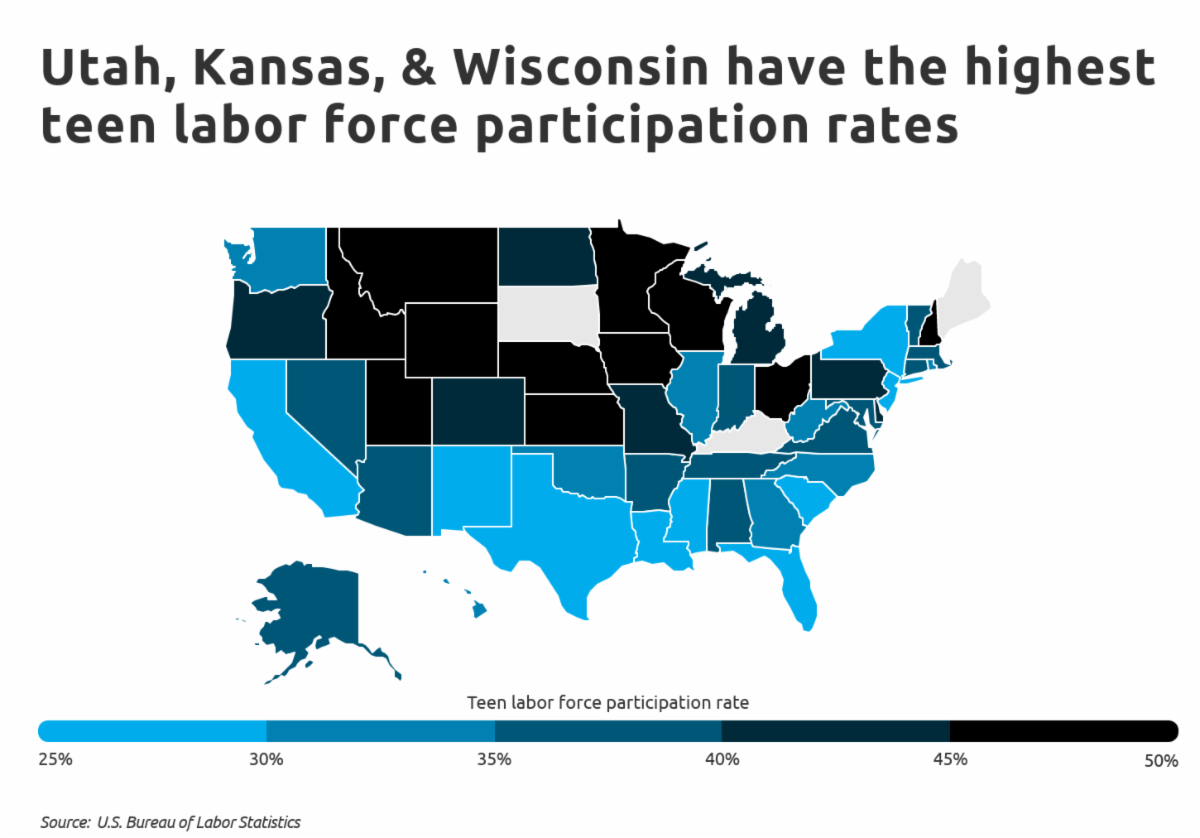 Data on teen labor force participation, teen population, part-time and full-time workers and the teen unemployment rate are from the U.S. Bureau of Labor Statistics. Minimum wage statistics were compiled from state government websites. To identify the states with the most working teenagers, researchers at Self Financial ranked states based on their teen labor force participation rates for 2020—defined as the total number of teenagers aged 16–19 in the labor force divided by the total, noninstitutionalized population aged 16–19.

The analysis found that there are 534,000 working teens in California, which amounts to 27.6% of the total teenage population in California. The rate for the country as a whole is 34.5%. Out of the 47 states with complete data included in the analysis, California has the 6th lowest teen labor force participation rate. Here is a summary of the data for California:

For more information, a detailed methodology, and complete results, you can find the original report on Self Financial’s website: https://www.self.inc/blog/states-with-the-most-working-teenagers