California Has The 2nd Most Expensive Real Estate In The U.S.

New data from the Case-Shiller Index reveals that the housing market is rising at a rate that hasn’t been seen in decades. While the year-over-year change in home prices hit a historic high in 2005, that housing boom was tame compared to 2021 when considering the speed at which prices have risen in the past year. Home prices have been rising for over a decade; however, prices have been skyrocketing at near-record rates—13.2% in March 2021. Fueling the blazing housing market has been five main factors, according to a January 2021 analysis from Harvard University’s Joint Center for Housing Studies. These include a prolonged housing production shortfall since 2008; record-low mortgage rates; fewer homes for sale due to stay-at-home orders and pandemic concerns; a shift in family spending away from travel and entertainment toward housing; and an acceleration of second home purchase. These factors combined to spur housing price increases felt on national, state, and local levels. 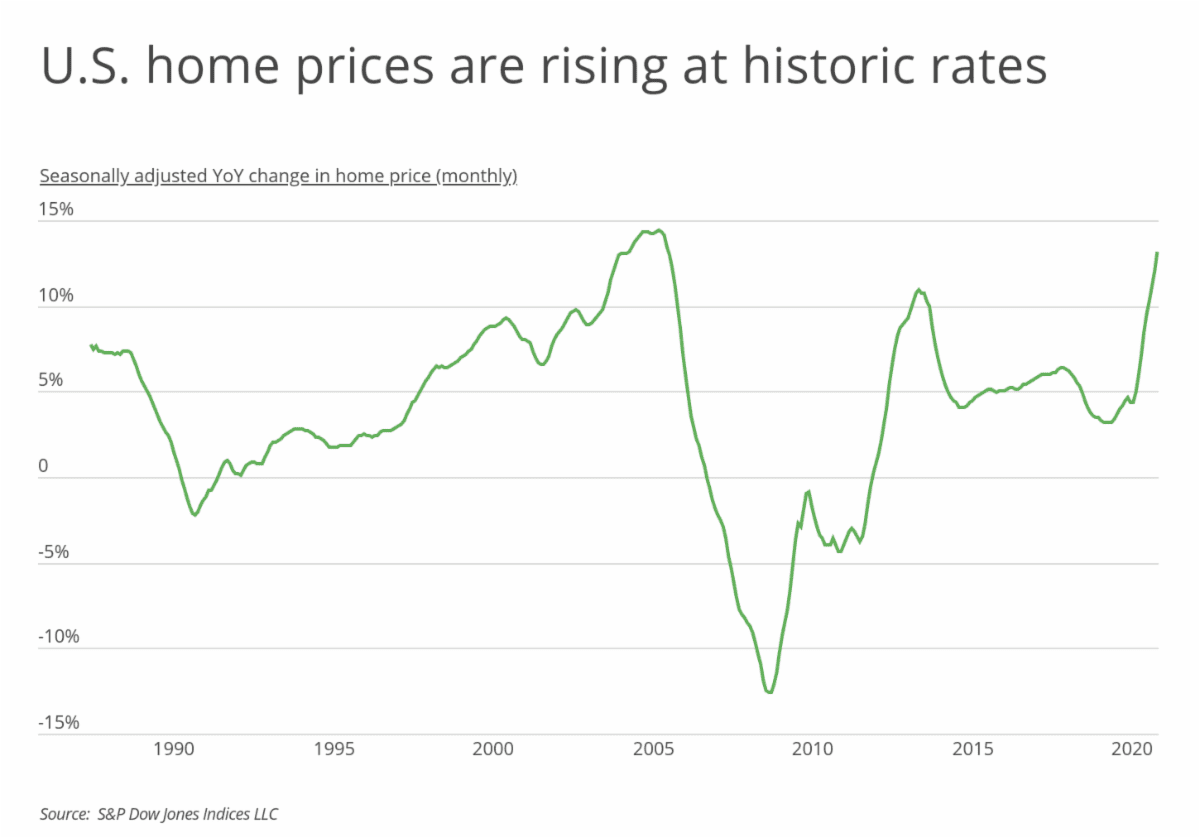 As homebuyers face the prospect of increasing prices, they also have to deal with another sobering reality: new homes priced under $300,000—approximately what the median American household would be able to afford—are increasingly rare. New residential sales data from the U.S. Census Bureau indicates that the percentage of homes under $300,000 dipped to 35.4% in Q1 2021, a decrease of more than 46 percentage points from Q3 2002 when 82% of new homes on the market cost less than $300,000. 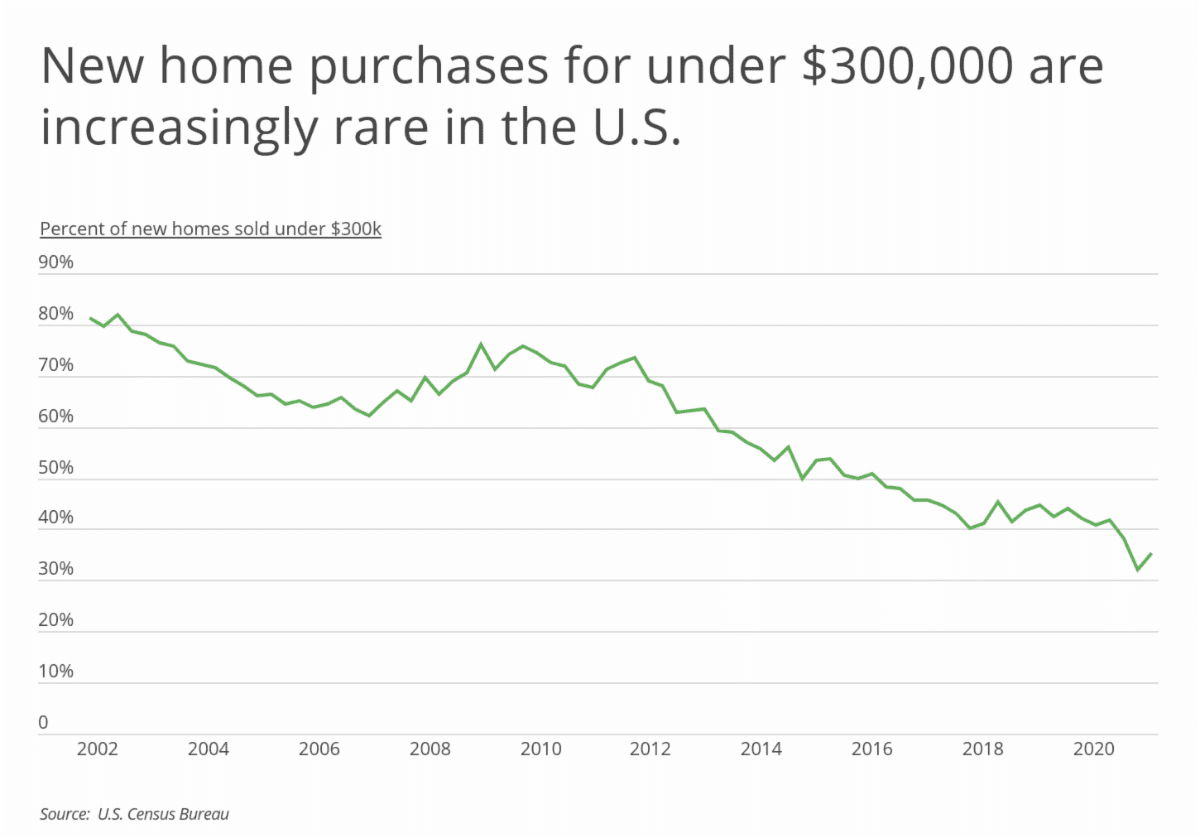 At the state level, homes are most expensive in Hawaii, where the median price is nearly $710,000, or about 150% higher than the national median price of $281,370. California is second at $654,629, which is also more than double the national median. Massachusetts and Washington are the third and fourth most expensive states, respectively, with home prices just under half a million dollars, according to data from Zillow. At the opposite end of the spectrum, West Virginia’s median home price of $116,723 is the lowest in the nation and 58% lower than the national median. Other states in the South and Midwest, such as Mississippi, Arkansas, and Oklahoma, report similarly low prices alongside below-average year-over-year growth. 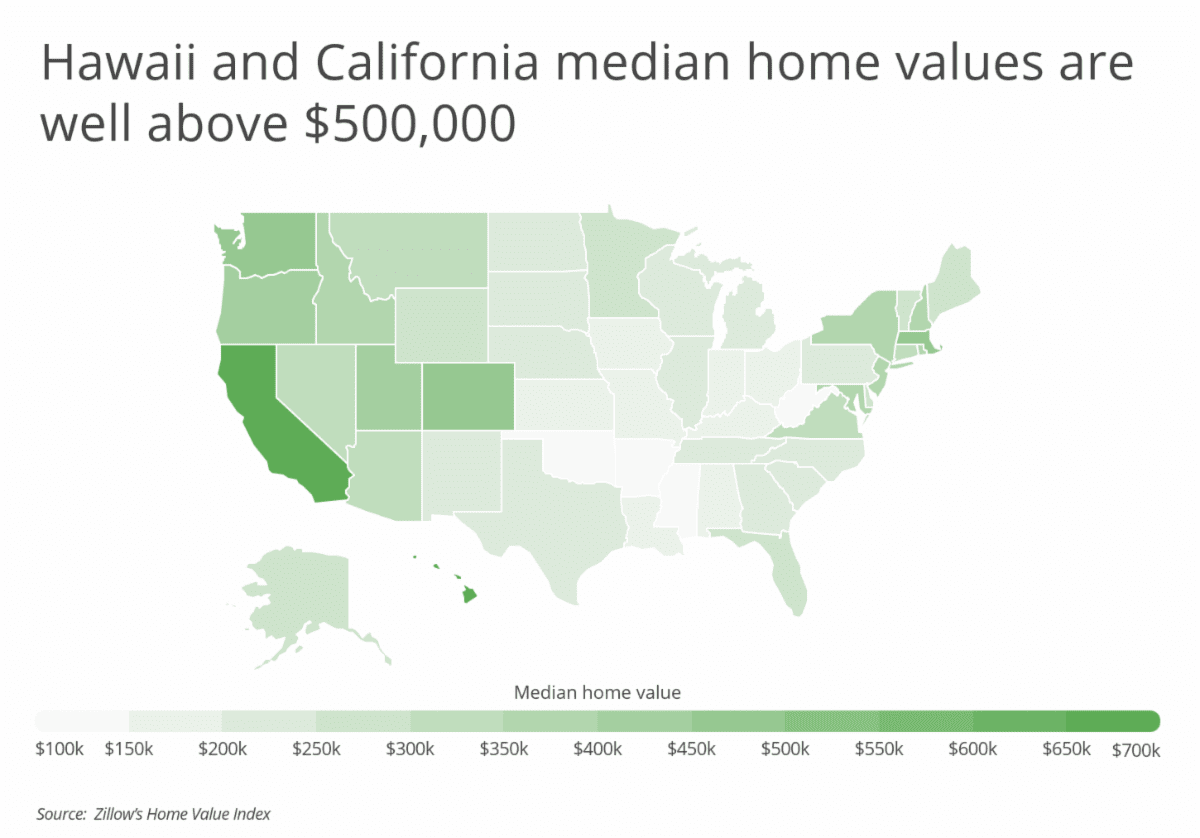 To determine the locations with the most expensive real estate, researchers at Inspection Support Network analyzed data from Zillow and the U.S. Census Bureau. The researchers calculated median home value using the most recent Zillow Home Value Index (ZHVI), and included the previous one-year change in home value, the forecasted future one-year change in home value, and median household income. The analysis found that the median home price in California experienced a +12.5% change over the past year to $654,629, compared to the national median of $281,370. Out of all states, California has the 2nd most expensive real estate. Here is a summary of the data for California:

For more information, a detailed methodology, and complete results, you can find the original report on Inspection Support Network’s website: https://www.inspectionsupport.com/resources/cities-with-most-expensive-real-estate/