California Is The 18th Best-Paying State For Roofers

The COVID-19 pandemic has caused long-lasting economic disruption in many industries, but one field that is poised for continued growth coming out of the pandemic is construction trades, including roofers.

The occupational outlook for roofers from the U.S. Bureau of Labor Statistics estimates that nearly 15,000 roofing jobs will come open annually through 2029. But these projections date from before the COVID-19 real estate boom, which brought on an unusual combination of high demand and record low-supply for residential real estate.

Many builders now are trying to develop new housing stock to catch up to consumer demand. For homeowners who are staying in their current residences and enjoying the benefit of higher savings rates and generous government stimulus during the pandemic, investments in home improvements have become increasingly common. Together, developments like these mean that roofers and other residential construction workers will find their services in higher demand in the near future. 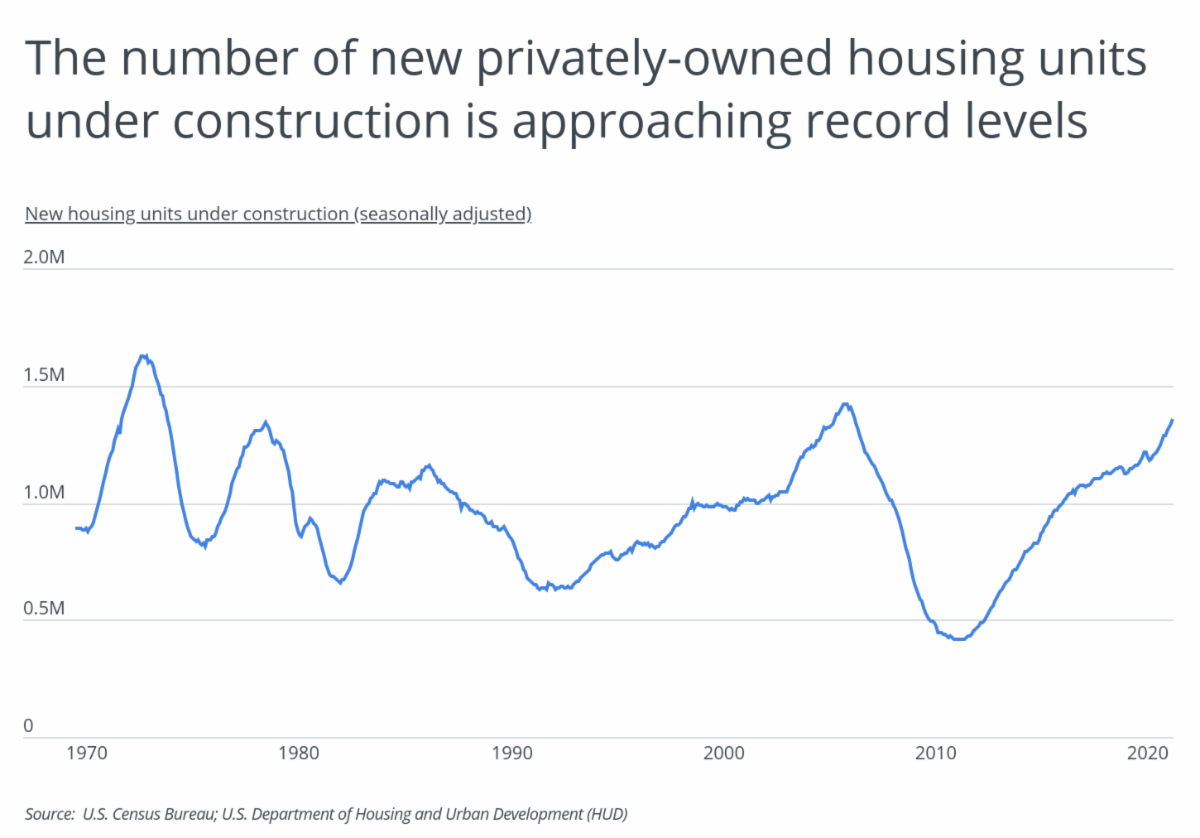 One indicator that illustrates this opportunity is the number of new housing units under construction. This number frequently follows larger economic trends, declining in recessions and increasing during periods of economic growth. Most recently, this figure plummeted to a low of 414,000 in 2011, after the bursting of the housing bubble and ensuing Great Recession. Since then, this number has been climbing steadily over the last decade and grew even more quickly from 2020 to 2021. In June 2021, the number of new units under construction was 1.36 million—rapidly approaching the pre-Great Recession peak of 1.42 million. 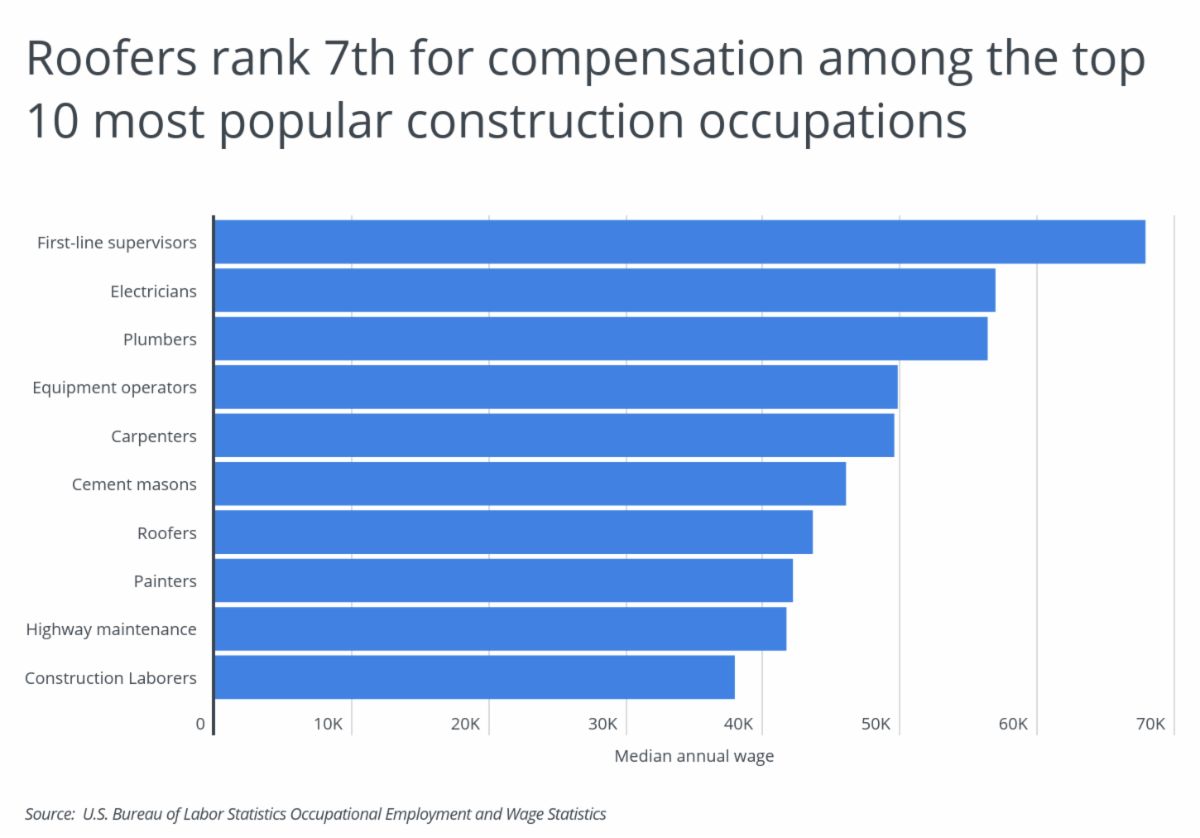 While demand for roofers should remain strong coming out of the COVID-19 pandemic, one area where the profession may still have room for growth is wages. According to current BLS data, roofers rank only 7th out of the top 10 construction occupations with the most employees, coming in at a median annual wage of $43,580. Roofers make a similar amount to painters, but are compensated significantly less than other high-skill construction occupations like electricians, plumbers, and equipment operators. 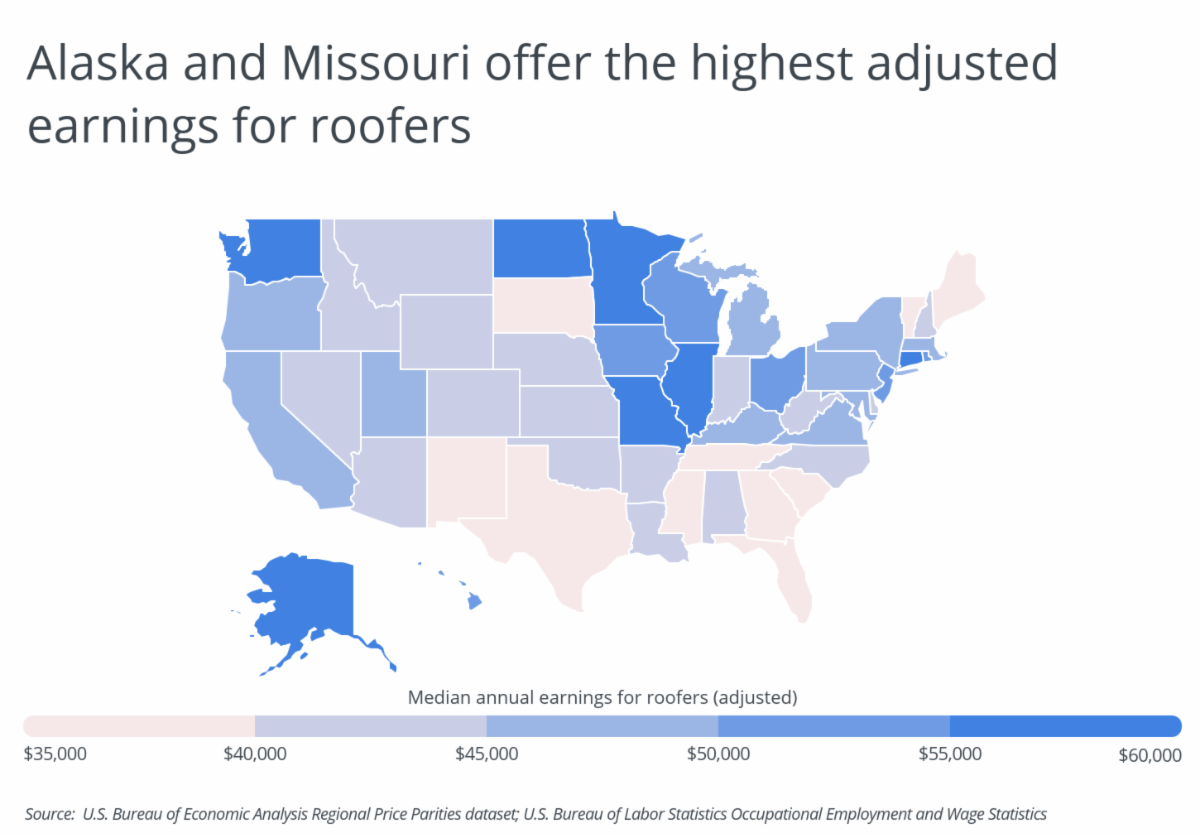 However, earnings for roofers can vary widely state by state. At the low end, roofers in Florida make a median annual salary (adjusted for cost of living) of $34,297, while the best-paying state is Alaska at $60,048. States in the South and New England tend to pay the least after adjusting for cost of living, while the Midwest offers some of the highest adjusted pay for roofers. However, regions do not perfectly explain differences in wages: for instance, North Dakota and Minnesota offer the third- and fourth-highest pay, while neighboring South Dakota is second-lowest.

The analysis found that in California, roofers earn a median annual wage of $55,250. After adjusting for the above average cost of living in California, that figure decreases to $47,466 per year, compared to a median of $43,580 that roofers earn throughout the country. Still, out of all U.S. states, California is the 18th best-paying for roofers. Here is a summary of the data for California:

For more information, a detailed methodology, and complete results, you can find the original report on Porch’s website: https://porch.com/advice/best-paying-cities-for-roofers