California Strong To Host A Drive-In Movie Fundraiser – May 22

California Strong’s next major fundraiser for California residents impacted by natural disasters and tragic events over the past few years is the drive-in showing of Major League on Saturday, May 22. Special contributions and appearances will be made by the founders of California Strong, as well as stars of the film Charlie Sheen and Bob Uecker.

Since its conception in 2018, California Strong has been focused on helping Californians struggling with their finances and livelihoods due to an array of disasters that have struck the state. The organization has raised over $2.6 Million and given grants to more than 1,400 families.

“As big as the state may be, we know that there is a strong sense of community amongst all Californians,” said California Strong co-founder Mike Attanasio. “This year, we wanted to find a way to safely continue our efforts of bringing people together and knew that a drive-in movie fundraiser would be an awesome way to do that.” 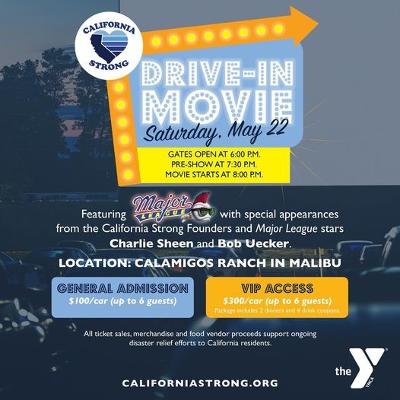 “It means the world to know that the community wants to support others in need,” said Ryan Braun, MLB player and co-founder of California Strong. “We can’t wait to share this fun night with other people who want to take action and do their part to help the greater good.”

The drive-in movie event will take place at Calamigos Ranch in Malibu. Gates open at 6pm, with the pre-show beginning at 7:30pm and the movie starting at 8pm. On site will be food trucks, snack shacks, and drink options for everybody. All of the proceeds will benefit families in need.

For more information, and to purchase tickets, visit californiastrong.org.

California Strong founders include Major League Baseball players and California natives Christian Yelich, Ryan Braun and Mike Moustakas, Mike Attanasio of the Milwaukee Brewers ownership group, and Detroit Lions quarterback Jared Goff. They joined forces with the Southeast Ventura County YMCA to create California Strong after the Borderline shooting and California fires in November 2018. The organization is committed to providing immediate financial support to victims whenever a disaster strikes anywhere in the state. For more information about California Strong or to donate, visit www.californiastrong.org or call Southeast Ventura County YMCA, 805-497-3081.