Camarillo, CA – It is with great sadness Casa Pacifica Centers for Children and Families announces the passing of their Board President William “Bill” Powell. Bill passed away on Thursday, February 4th. Bill joined Casa Pacifica’s Board of Directors in 2012 after reaching out to the nonprofit in 2010 for a tour, steadily increasing his involvement. Bill has served as Board President since 2017. Casa Pacifica CEO Shawna Morris said, “Bill’s clear vision, strong leadership and gentle guidance strengthened Casa Pacifica in every way. His relentless pursuit of excellence coupled with his heart of gold was a blessing to all of us. He will be greatly missed both in my heart and in our organization.”

Bill maintained an active presence on campus, chairing the Executive Committee and attending each of the other monthly Board Committee meetings – Finance, Governance, Program Oversight, Risk Management, and Human Resources. Bill, along with his wife Jewell have generously supported every single Casa Pacifica fundraising event from 2012 to present. The Powells are also active contributors to Kids Club, an annual giving program which helps provide sustaining financial support to the nonprofit. Bill stepped up to lead the completion of Casa Pacifica’s Building New Foundations of Hope Capital Campaign when the previous chairman had to step down. Jewell then surprised Bill by purchasing a naming opportunity, as part of the Campaign, to name the campus’ warehouse/loading reception area in honor of his late father – Richard Powell – who was his role model and hero. Bill has used his contacts from his Corporate Board participation to benefit Casa Pacifica, including discounted pricing from Granite Construction to pave our driveways and parking areas for the new Stepping Stones Transitional Housing when it was built on campus, as well as donations/matching gifts from FMC Corporation that have totaled over $400,000 in the last few years.

In addition to his Board commitments, Bill and Jewell volunteer on campus with the kids. Jewell is an active member of the Casa Pacifica Angels, Casa Pacifica’s auxiliary fundraising group and spends time with the Casa Pacifica youth teaching weekly dance classes, even continuing via Zoom during the pandemic. Bill was especially interested in helping emancipated youth and preparing them for life after foster care – volunteering at Casa Pacifica’s “Road to Independence” event hosted by the Transitional Youth Services program for foster youth throughout the county, where youth practice and learn about valuable resources accessible to them following their emancipation. Powell also shared his knowledge and love for cooking with the kids on campus, spending time teaching cooking classes in the Bauer Teaching Kitchen. The kids affectionately called him “Chef Willie.” A luncheon prepared and hosted by Chef Willie and his students was auctioned off at Casa Pacifica’s Yummie Top Chef Dinner and together, Chef Willie and his students served a four-course Italian feast. 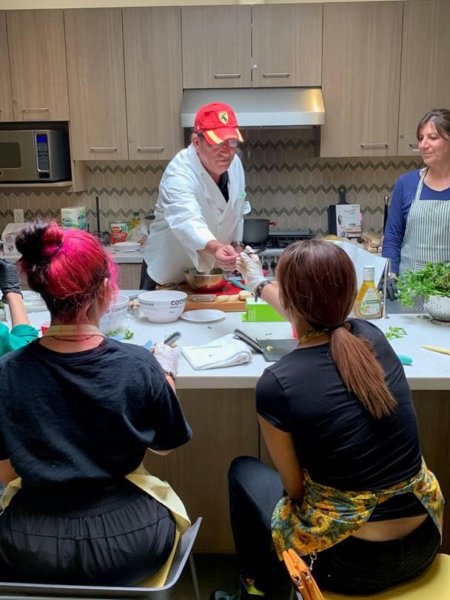 Donations in Powell’s memory can be made to Casa Pacifica’s William H. Powell Memorial Fund at www.casapacifica.org or https://12732.thankyou4caring.org/willim-h-powell-memorial-fund or to Dancing With Our Future Stars at www.dwofs.com. Donations to Casa Pacifica will directly support Powell’s vision to build and strengthen Casa Pacifica’s policies and practices.

Powell was set to end his term as Board President in July 2021. Taking over as Board President is Board Vice President Robert Wynner who was already set to take the post upon Powell’s retirement in July. Wynner and his wife Shealen are also longtime Casa Pacifica supporters. Wynner, a partner at Westlake law firm Nevers, Palazzo, Packard, Wildermuth, and Wynner, joined the Board of Directors in 2010 and also previously served as President of the Casa Pacifica Amigos, a volunteer auxiliary group who mentors and spends time with the kids on campus.

Casa Pacifica Centers for Children and Families is a crisis-care and residential treatment facility for foster or at-risk children in Ventura and Santa Barbara Counties. It’s mission is to restore hope, enhance resilience, and strengthen community connections for children, young adults and families at the most challenging times of their lives. The agency is the largest non-profit provider of children’s mental health services in both counties and administers a number of community-based programs designed to strengthen families and keep children in their homes and communities. Casa Pacifica is also a foster family agency, which recruits and trains families for potential placement with a foster youth. For more information about Casa Pacifica visit its website www.casapacifica.org or call the Development & Public Relations Department at (805) 445-7800.