PHOENIX, AZ—“Why should Christians care about the public square?” asked Charlie Kirk, founder of Turning Point USA, to a live audience of over 1,200 attendees at the Dream City Church Tuesday evening in an event that was broadcast nationwide.

Charlie Kirk immediately answered the question by quoting two scriptures: “And seek the peace of the city where I have caused you to be carried away captive, and pray to the Lord for it; for in its peace you will have peace” (Jeremiah 29:7) and “When the righteous are in authority, the people rejoice; but when a wicked man rules, the people groan” (Proverbs 29:2).

“I have spoken to over 70 churches in the last year, once I realized that if the church does not rise up at this moment, then the country and Republic will be gone as we know it. It is time to keep the state out of the church.”

Kirk retraced America’s Christian roots by recounting stories of three American founders: John Jay—the first Supreme Court Chief Justice who spoke that “Providence has given to our people the choice of their rulers; it is the duty of our Christian nation and privilege to select and prefer Christians for their rulers”; Benjamin Rush who said domestic slavery was “repugnant to the principles of Christianity” and John Adams (our second President) who said “the Bible is the greatest book to ever exist in the history of the world.”

Kirk mentioned the Mayflower Compact signed at sea dedicating America to God as a “promise to each other” on how to govern ourselves. “We were not founded by deists or as a mistake of the Enlightenment” but on the shoulders of the First Great Awakening and the Black Robe Regiment in which Christians and activist pastors took “courageous action” to revolt against England (56 men signing the Declaration of Independence) and seeking “freedom” and later fighting for “life and liberty.” According to Kirk, “Churches and pastors were not just spectators but they got into the game contesting for the welfare of the nation. If we are free in Christ, while are we not free from King George?”

But a threat to America and the free world began to rise up in the 20th century and that threat would be described in a 1950s sermon: “The communist revolution is not going to give up and retreat. This is a battle to the death. Either communism must die or Christianity must die.

“The devil is a religious leader. The name of this present-day religion is communism. We can accept this religion that converts a peaceful world to the doctrine of death and destruction and which has captured the loyalty of millions who believe the state is supreme and the individual exists only for the welfare of government and believe in the replacement of private property and land and socially do not believe in marriage. They are devoted to a big lie—to the murder of Christians—a war of ideologies—a war of secular against spiritual in which we will either be led by Jehovah God in truth or duped by Satan.” This sermon was given by Rev. Billy Graham in 1954.

Criticizing how our attention is too focused on national instead of local issues, Kirk challenged the audience by sharing “…have no fellowship with the unfruitful works of darkness, but rather expose them” (Ephesians 5:11). Kirk then began to speak on the misguided notions of racism in America and in local communities saying “for you are all one in Christ Jesus” (Galatians 3:28) and “He has made from one blood every nation of men to dwell on all the face of the earth” (Acts 17:28) rather than the critical race theory that is now being taught in schools across the country.

Today’s champion of critical race theory is scholar Ibram Xolani Kendi (IXK changed his name in 2013 from Ibram Henry Rogers) and now his ideas have perpetuated through the public school system:

Kirk expressed that America should reflect equality—which states that “the law should be color blind with everyone receiving non-preferential treatment” vs. equity “a dangerous word” which involves “redistribution” and focuses on “skin color.”

Kirk used both state and local examples to describe the prevalence of critical race theory in public schools:

“I am obsessed,” said Kirk, about Jesus’ question on “Who do you say I am?” Christ said: “On this rock I will build my ecclesia (the political assembly of citizens) in which they focused on freedom and equality.”

Kirk then spoke on a tale of two states: California and Florida each with similar populations but two different outcomes in recent history. California “at one time a conservative state and the state of the future—a place you went to succeed” but then the churches of California adopted a “we don’t do politics position” or a “cool and comfortable Christianity” that turned the state (from red to blue) which has now become the laughing-stock of the country. The state is broken with more aborted children than the population of Canada, no fault divorce, transgender bathroom and people fleeing.

“Florida has more registered Democrats than Republicans but has now adopted a zero income tax rate; does not allow schools to teach critical race theory, has embraced an anti-rioting bill as well as open and carry gun policies and school choice. This all was because people of faith and morals rose up courageously in Florida.

“The people of Arizona need to decide whether they want to be like California or Florida. Arizona is a 50:50 state to be determined. If we act now, we can make Arizona look like Florida and not like California.”

“We want to grow this Freedom Square and we will pack this up with different teachers, adjusted to what is happening in the news cycle and get very specific with marching orders on things you can actually do. Some of you need to run for elected office as a Mayor, City Council or School Board. What reasons do people give for not running for elected office: They don’t know how; I am afraid; You don’t think you are going to get support; and you feel you are alone.”

“Freedom Square will encourage other pastors across America to take a stand for the Bible and Biblical values,” said Dream City Pastor Luke Barnett.  Charlie Kirk thanked Godspeak Pastor Rob McCoy (his personal pastor from California) for attending Freedom Square and said: “There are two great things started this week in Phoenix, Arizona:  the launching of Freedom Square and my getting married on Saturday.”

(Editor’s Note: To view the May 4 Freedom Square event go to: https://www.youtube.com/watch?v=2806lyoUPdg. Charlie Kirk begins speaking at the 48-minute mark.) 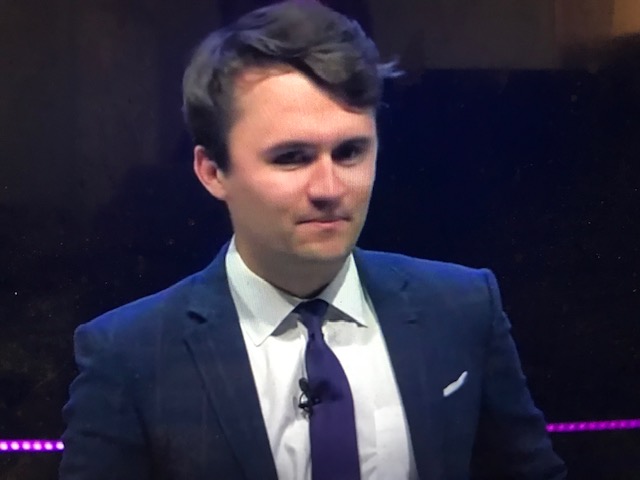