Two weeks after we reported that China’s property market just suffered “catastrophic” property sales in September which invoked Goldman’s “hard landing” scenario and which saw total sales of 759.6b yuan plunge 36.2% from September 2020 (and 17.7% lower from the same period in 2019), deepening a downward spiral that started in July with transaction volume of residential properties in Beijing, Shenzhen and Guangzhou declining 30% y/y, while Shanghai fell 45%, the freeze in China’s property market is starting to manifest in prices for what Goldman has dubbed the world’s largest asset class.

Overnight, China’s National Bureau of Statistics reported that China’s home prices fell for the first time in six years as the property slump deepens in the world’s second-largest economy. New-home prices in 70 cities, excluding state-subsidized housing, slid 0.08% in September from August, the first drop since April 2015. Values in the secondary market declined 0.19%, down for a second month.

Some more details from Goldman: 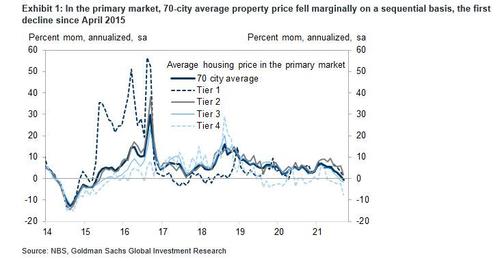 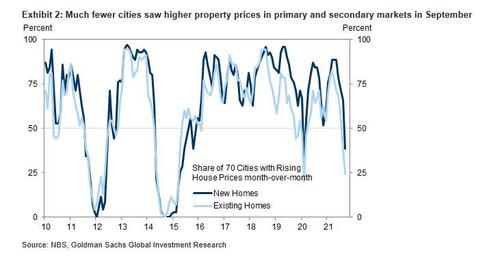 Echoing what we said two weeks ago, Caixin notes that a slump in the home market is becoming more evident as developers including China Evergrande Group struggle to raise money and buyers stay away.

And since 70% of China’s net worth is parked in housing, and since Chinese citizens have not encountered a drop in home prices since 2015, falling prices may fuel a vicious cycle by further weakening demand, worsening the cash shortage at builders and forcing them to offer bigger discounts.

As we reported previously, even though September is traditionally a peak season for the home market, residential sales tumbled 17% by area, investments slid for the first time since early 2020, and the rate of failed land auctions climbed to the highest since at least 2018.

The downturn has continued into this month, with existing-home sales crashing 63% from a year earlier in the first 17 days of October, according to a Nomura note Monday.

“The new-home market faces relatively big downward pressure in the short term,” Yang Kewei, a research director at China Real Estate Information Corp., said before the figures were released. “The effects of price discounts are waning.”

Fears of contagion from the crisis at Evergrande have intensified after a surprise default by Fantasia Holdings last week and a wave of credit rating downgrades at other developers sent bond yields on Chinese high-yield dollar bonds, which are dominated by builders, soaring to their highest in about a decade, hurting a key funding channel for the sector. Yields did dip modestly after the PBOC sought to reassure the population that the situation is under control, in a deja vu moment from the days surrounding the Lehman bankruptcy.

That will have a knock-on effect on the broader economy, since Goldman Sachs Group Inc. estimates the property sector and related downstream industries make up almost a quarter of gross domestic product.