“I have instructed my representatives to stop negotiating until after the election,” President Donald Trump announced (via tweet) on October 6. “[I]mmediately after I win, we will pass a major Stimulus Bill …”

Trump reversed himself three days later, but House Majority leader Nancy Pelosi (D-CA) isn’t having any of it. On October 10, she described the administration’s current “COVID-19 relief” proposal as “one step forward, two steps back.”

Both major political parties would have you believe that the devil is in the details — that they’re both fighting hard for particular priorities and just can’t come to a meeting of the minds.

In reality, this is all about next month’s elections, which will decide control of the White House for the next four years, and possibly of both houses of Congress for the next two. 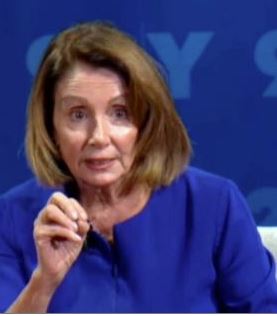 “There is no limit to the amount of good you can do,” President Ronald Reagan once said, “if you don’t care who gets the credit.”

Donald Trump, Nancy Pelosi, Mitch McConnell, and (in the background) Democratic presidential nominee Joe Biden care a great deal about who gets the credit.

Donald Trump would love nothing better than to put a big fat “stimulus” check, signed “Donald J. Trump,” in your mailbox before you cast your vote. Nancy Pelosi’s signature wouldn’t accompany his.

Pelosi’s more expansive proposal focuses more on extending “enhanced” unemployment benefits, as well as new funding for Democratic Party constituencies in public education and local government — “relief” that might get her party at least a little credit.

Neither side is likely to give an inch until after November 3. Maybe not until after January 20 of next year if the White House changes hands.

I can’t say I’m unhappy about that. Politicians throwing “stimulus” money at Americans is a poor substitute for those same politicians knocking off their COVID-19 panic-mongering, getting their boots off our necks, and letting us get back to normal life.

On the other hand, they’re not likely to do the latter any time soon, any more than they can agree on doing the former at the moment.

Americans always find ourselves prisoner to partisan political considerations, but never more cruelly or more obviously than as a major election nears. And yet the majority of those who bother to vote continue to vote for these opportunistic, self-serving jailers.

The beatings will continue until morale improves — or until we pull a mass jailbreak and start voting Libertarian.