Carlsbad, CA – Just days before a signature drive was slated to wrap up to force a Recall Election against her, controversial Carlsbad City Councilmember Cori Schumacher today announced her resignation from office. 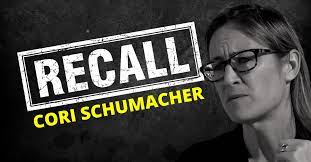 “Today is a big win for the citizens of Carlsbad and removes a toxic presence from Carlsbad city government,” said Carl DeMaio, Chairman of Reform California – the organization that launched the Recall campaign against Schumacher.
“Schumacher and her special interest political backers had the same polling we had and they knew they could not survive this Recall Election, so they smartly opted to throw in the towel just days before we were expected to submit our signatures on the Recall petitions,” DeMaio explained. “As of our campaign’s last count, our team of grassroots volunteers had collected nearly 4500 signatures and we were just gathering extra signatures for a safety margin,” noted DeMaio.
Reform California only needed to collect roughly 3700 signatures to force the Recall Election against Schumacher and had until September 8 to do so.
The Recall against Schumacher was filed days after a San Diego Judge found Schumacher liable for falsely accusing several of her constituents as posing a violent threat to her personal safety and seeking a restraining order against them. Schumacher’s only evidence was the constituents had criticized her on social media. In dismissing her restraining order application, the judge not only reprimanded Schumacher but fined her financially and found in favor of a counter-suit filed by the constituents. City taxpayers faced the possibility of being forced to pay more than $100,000 in damages to the victims of Schumacher’s misconduct.
The 10 sponsors of the recall against Schumacher were all women. They were outraged that Schumacher’s false police report included a request for a restraining order against her constituents that diverted and wasted much-needed family court resources that should have been available to true victims of domestic violence.
Schumacher also pursued extreme policies that were harmful to her constituents. Schumacher pursued stiff penalties to punish small businesses during the Covid-19 lockdowns, opposed the reopening of schools, and supported the raids on road repairs at SANDAG.
“The outcome of our Recall campaign should send a clear message to other local politicians that they will be held accountable for their misconduct in office and for their extreme positions on important issues,” said DeMaio.
“I am pleased that Cori Schumacher’s resignation will give the citizens of Carlsbad a fresh start and a chance to put Schumacher’s misconduct behind them so they can once again focus on the important issues that matter,” DeMaio concluded.
About Reform California
Formed in 2003, Reform California is dedicated to holding state and local government accountable through ballot measures and recall campaigns. For more information, visit www.citycouncilrecall.org