A pediatric nurse said she was compelled to research the science on the risks and benefits of cloth masks after learning that her granddaughter’s preschool would require every child over the age of 2 to wear a mask.

Patricia Neuenschwander, a registered nurse with over 25 years of experience, said she understands that the preschool had the children’s safety in mind with their mask policy, but she is concerned that wearing a mask all day may cause some harm to the children’s social, mental, and emotional development. Her granddaughter is 2 years, 5 months old.

“Children are not small adults, they progress through a developmental maturation that builds upon different skills,” Neuenschwander told The Epoch Times. “At that age, they want some increase in independence, they need to become more confident in their own ability to survive in the world. Being overly criticized, being overly controlled, not being given the opportunity to assert themselves, that can start to become a problem for children at that age.”

She said she supports wearing masks if people are at high risk and want to protect themselves out in public. She questions the need for healthy people to wear masks when the evidence has not shown that the benefit outweighs the risk.

She also knows the physical and emotional toll of having to wear a mask for a long time. She had to wear a medical mask for 12 hours every day at work for 2 years because she declined the flu vaccine. She noticed an “increase in headaches and neck tensions” with mask-wearing. 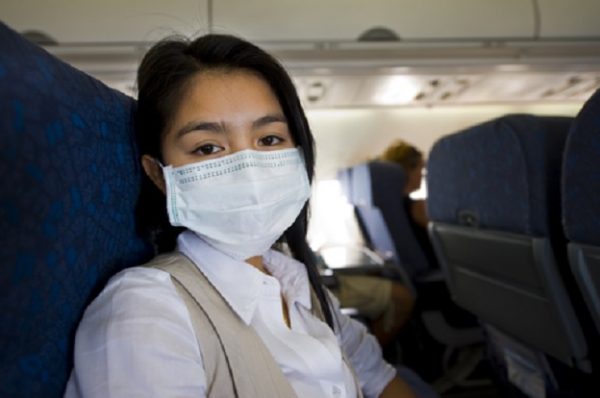 The first large randomized study to evaluate cloth masks in preventing infection was conducted in 14 hospitals in Vietnam in 2011. The study concluded: “The results caution against the use of cloth masks. This is an important finding to inform occupational health and safety. Moisture retention, reuse of cloth masks and poor filtration may result in increased risk of infection. Further research is needed to inform the widespread use of cloth masks globally. However, as a precautionary measure, cloth masks should not be recommended for HCWs [healthcare workers], particularly in high-risk situations, and guidelines need to be updated.”

The Centers for Disease Control and Prevention (CDC) doesn’t mention this randomized trial in its recommendation for people to wear cloth masks in public settings where social distancing is difficult to maintain.

The CDC cites seven studies on its page regarding cloth face coverings. Neuenschwander says none of the studies talked about the safety or effectiveness of mask-wearing in preventing transmission.

“They were all substantiating that this virus was transmitted person to person,” Neuenschwander said. “We kind of knew that when we were doing social distancing and shutting down places, that people could spread it to each other.”

The World Health Organization has taken a different approach from the CDC. According to its guidance: “There is limited evidence that wearing a medical mask by healthy individuals in the households or among contacts of a sick patient, or among attendees of mass gatherings may be beneficial as a preventative measure.

“However, there is currently no evidence that wearing a mask (whether medical or other types) by healthy persons in the wider community setting, including a universal community masking, can prevent them from infection with respiratory viruses, including COVID-19.”

The guideline further states that wearing masks may lead to more touching of the face, and “may create a false sense of security” in people that they forget to social distance or practice hand hygiene. It does, however, recommend that people with symptoms wear a mask.

Comments from Dr. Anthony Fauci, the director of the National Institute of Allergy and Infectious Diseases, caused further confusion for Neuenschwander, who said she felt less confident in supporting mask-wearing.

In a March interview with “60 Minutes,” Fauci was asked to clarify the confusion over the need to wear masks. “Right now in the United States, people should not be walking around with masks,” he said.

“When you’re in the middle of an outbreak, wearing a mask might make people feel a little bit better, and it might even block a droplet. But it’s not providing the perfect protection that people think that it is. And often there are unintended consequences; people keep fiddling with the mask, and they keep touching their face.”

Then in a May 12 Senate hearing, as the death toll surpassed 80,000 in the United States, Fauci testified that the practice of physical and social distancing was still the best personal protective measure. But if people needed to go out, they should use “some sort of covering,” he said.

“We don’t want to call it a mask because back then we were concerned we’d be taking masks away from the healthcare providers,” Fauci said. “But some sort of mask-like facial covering, I think for the time being should be a very regular part of how we prevent the spread of infection.”

In a CNN interview on May 27, Fauci said: “I wear it for the reason I believe it is effective. It’s not 100 percent effective. I mean it’s sort of respect for another person and have the other person respect you.

“I want to protect myself, to protect others, and also because I want to make it be a symbol for people to see that that’s the kind of thing you should be doing.”

Neuenschwander questions why the recommendation keeps changing. The original reason for people to wear masks was to protect other people, not yourself. “If masks were so great and we knew it would slow down the spread, why weren’t they recommending the end of February, or beginning of March when we started social distancing,” Neuenschwander said.

The American Medical Association in an April article published on JAMA Network, says: “New guidelines state that healthy individuals can consider wearing masks in public settings, particularly when physical distancing is difficult (like in grocery stores or pharmacies).

“However, nonmedical masks [cloth masks] may not be effective in preventing infection for the person wearing them.”

The medical association writes that social distancing and hand hygiene continue to be “the most important methods to prevent virus transmission.”

Taking Politics Out of the Pandemic

Dr. Michael Osterholm, PhD, MPH, and director of the Center for Infectious Disease Research and Policy (CIDRAP) at the University of Minnesota, said in a CIDRAP podcast that the fight against the CCP virus pandemic needs to “remain based on a scientific foundation to what we do or don’t do” and not become a political or an emotional issue.

Regarding wearing facial coverings, it “has become an emotional issue” where people have decided, “that if you’re for cloth masks, you’re for preventing transmission to people, and if you’re not, you’re not. And that’s just simply not the case.”

Osterholm, who has been in public health for 45 years, said that there is “increasing data today to support that this virus is transmitted in a very big way, by aerosols.” Aerosols are invisible tiny droplets that float in the air and can spread COVID-19, the disease caused by the CCP virus.

Osterholm says only N95 respirators are effective in blocking the transmission of a virus because it does not allow air to leak from the sides of the face and has a unique matrix material to allow air to pass through while it traps the virus. But for cloth masks, aerosols can just go right through and do not stop transmission of the virus.

“Do these cloth masks really help reduce transmission if aerosols play an important role? I think right now the National Academy of Science report says we don’t have any data to support that,” Osterholm said.

Many schools across China are banning masks during physical education classes or canceling a compulsory running test after two teen boys died a week apart in early May.

Both students, from central China, were 14 years old, and wore a mask while running laps during a gym test when they collapsed and died, according to Australian outlet 7news. The cause of death in one of the students was cardiac arrest. The report did not state the cause of death for the other student.

Also in May, a 26-year-old male jogger’s lung collapsed after running over two miles in Wuhan, the epicenter of the CCP virus pandemic, the New York Post reported. The man was wearing a mask while running. After complaining of difficulty breathing, he was rushed to the hospital where he underwent major surgery.

Wearing a mask, especially when exercising, may decrease the flow of oxygen into your lungs. “Different masks have varying levels of airflow restriction, depending on the thickness of the material,” Dr. Scott McAfee, an orthopedic specialist, and physical therapist, told CNET.

“With less air, your body has less available oxygen to utilize during exercise to convert to glucose [sugar] into energy.”

Some doctors suggest that masks should not be worn when exercising, while others say it’s fine to do so. Anyone who does wear a mask when exercising and has underlying respiratory or cardiovascular conditions, or who hasn’t exercised for a while, should take precautions when feeling lightheaded, short of breath, dizzy, or numb.