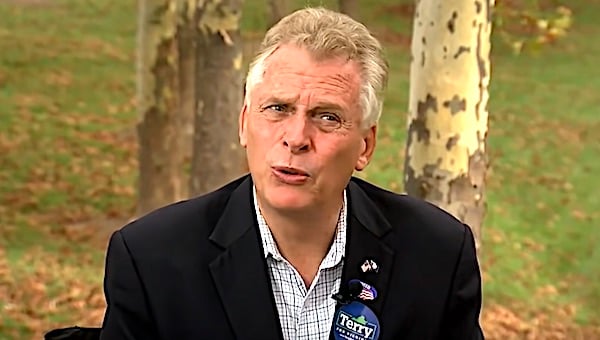 The Federal Election Commission has been asked to investigate a $350,000 donation to Terry McAuliffe, the Democrat candidate for governor in Virginia in this week’s election, because of allegations it came, illegally, from a foreigner.

The National Legal and Policy Center filed the formal request after the McAuliffe campaign, and others linked to the donation, declined to respond to questions.

“On or about July 15, 2021, McAuliffe received $100,000 from Lyca Tel and another $250,000 on or about July 15, 2021, for a total of $350,000 in campaign contributions,” the filing charges. “While Virginia law has no limits on the amounts an individual or corporation can give a candidate for state office, federal law prohibits donations from foreign nationals to campaigns at the federal, state and local levels.”

The Free Beacon explained NLPC, a government watchdog group, is charging Lyca Tel is a New Jersey subsidiary of Subaskaran’s telecom conglomerate in the U.K.

“This is effectively a really easy way to launder foreign money into the U.S. political process and to avoid the FEC prohibition on foreign nationals making contributions in U.S. elections,” Ben Freeman, of the Foreign Influence Transparency Initiative at the Center for International Policy, told the Free Beacon.

The report said Lyca Tel apparently has not contributed to earlier Virginia campaigns, but in July it retained Washington lobbyist Robert Thompson to address communications issues. Thompson already had been registered as a foreign agent representing Subaskaran.

The conglomerate has been in the headlines before, specifically when French authorities raided the Paris office of the linked company called Lyca Mobile, and arrested 19 people on suspicion of money laundering.

The report explained, “Lyca Tel’s operations in the United States have come under scrutiny as well. The Federal Communications Commission in 2011 fined the company $5 million for ‘deceptively marketing prepaid calling cards’ to largely immigrant buyers. The company reportedly claimed the low-cost cards could be used to make ‘hundreds of minutes of calls’ overseas, but buyers were only able to use ‘a fraction of those minutes for calls, because LycaTel applies a variety of fees and surcharges that quickly deplete the card,’ said the FCC.”

The Free Beacon noted Lyca Tel did not respond to questions. Nor did the campaign respond.

Just the News reported the complaint was filed on Friday.

McAuliffe is trailing, according to the most recent polls, in his fight with Republican Glenn Youngkin for the governor’s office in the state. Polls are open on Tuesday to decide that race.

The request for the investigation explains, “Lyca Tel’s contribution is one of the largest received by McAuliffe’s gubernatorial campaign this election cycle. Ethics experts say the donation raises foreign-influence red flags. It’s also reigniting questions about McAuliffe’s previous foreign-donor controversies. The FBI in 2016 reportedly opened an investigation into a $120,000 donation McAuliffe received from a company owned by Wang Wenliang, a Chinese citizen and a U.S. green card holder who served as a delegate to China’s parliament.”

The chain of companies also clashed with authorities in the United Kingdom over allegations of unpaid taxes.

“While the respondents can duck a reporter’s questions, only the FEC can compel them to respond to this complaint by finding ‘reason to believe’ a violation has occurred, and to fully investigate this matter by issuing subpoenas for documents and testimony to determine whether ‘probable cause’ exists…”