The SGU and Headquarters Detectives located and arrested (S) Cy Segovia for multiple felony and misdemeanor arrests warrants in a room at the Motel 6 on E. Harbor Boulevard in Ventura. Detectives searched Segovia’s motel room pursuant to his probation search terms and located stolen property from two recent Ventura commercial burglaries. The stolen property included miscellaneous barber equipment, which had been stolen from the victim’s barber shop and cash that likely came from the shop’s stolen ATM machine. Additionally, detectives located miscellaneous electronic equipment, bank checks, and other items that had been stolen from another victim’s business.

(VPD) Street Crimes Unit personnel responded to scene and coordinated the burglary investigation follow-up, including returning the stolen barber equipment to the victim.

Detectives believe these suspects may be involved in other burglaries or theft crimes in Ventura County and the investigation is on-going. If you have any information, please contact Detective Scott Baxter at 805-797-6373.

The Ventura County Sheriff’s Office would like to thank members of the public for their on-going support and diligence in providing information to assist our agency in solving crimes. We are better at what we do because of our community partnerships.

Join us in the fight on crime by following us on Twitter @VENTURASHERIFF, Facebook @VenturaCountySheriff, Instagram @VCSHERIFF, and with Nixle by texting your zip code to 888777 to receive local law enforcement and public safety alerts and advisories. 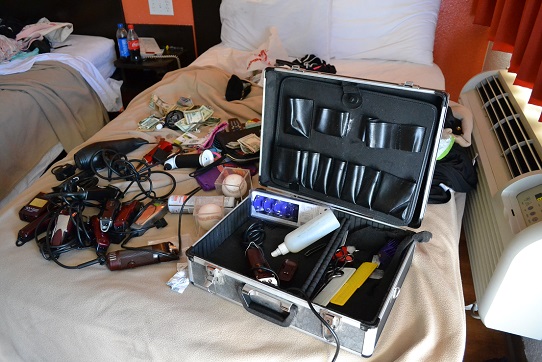 0
Reply
Back to top
mobile desktop