In an undercover video released this week, investigative journalists at Project Veritas confirmed what many parents fear: That union activists have infiltrated California schools and are pushing their ideologies on students.

“I have 180 days to turn them into revolutionaries … scare the f–k out of them,” the Advanced Placement United States Government teacher from Inderkum High School in Natomas Unified said.

The teacher, identified as Gabriel Gipe, explained he has turned others into Marxists and his efforts to do the same with students are working. Superintendent Chris Evans confirmed this with students.

“This was biased instruction designed to lead students to a specific ideology,” Evans said. The district is in the process of firing the teacher, who is currently on paid leave. “Some students were able to tell us, ‘he said that I’ll be more left when I leave this classroom.’”

The teacher also required students to publicly post where they fit on the ideological spectrum. “Completely inappropriate,” Evans added. 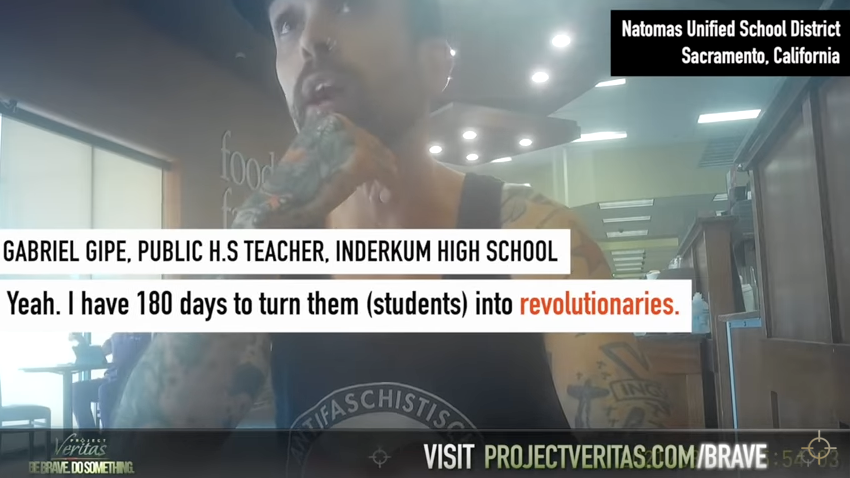 In several articles Gipe authored for Liberation, the so-called Newspaper of the Party for Socialism and Liberation, Gipe pledges support for the 2017 Sacramento City Teachers Association strike and is pictured picketing among them, raised fist, sign in hand.  Gipe, on behalf of the Sacramento City Teachers Association, is also listed as a supporter of the People’s Congress of Resistance, which aims to defeat capitalism, among other fringe goals.

Gipe admits students have complained that the Antifa flag hanging in his classroom makes them feel uncomfortable, but the teacher dismisses their discomfort, implying only fascists would be made uncomfortable by the image. Each week, he shares a calendar with students so they are aware of protests they may attend in exchange for extra credit. Natomas Unified added that Gipe has been marking students’ work with rubber stamps depicting Josef Stalin, Fidel Castro, and Kim Jung Un.

“He came clean on almost everything,” Evans said. “‘I’m a Communist,’ ‘I’m a part of Antifa,’ and, ‘Yes, I do teach it in my classroom,’” he said of statements Gipe made to the district. 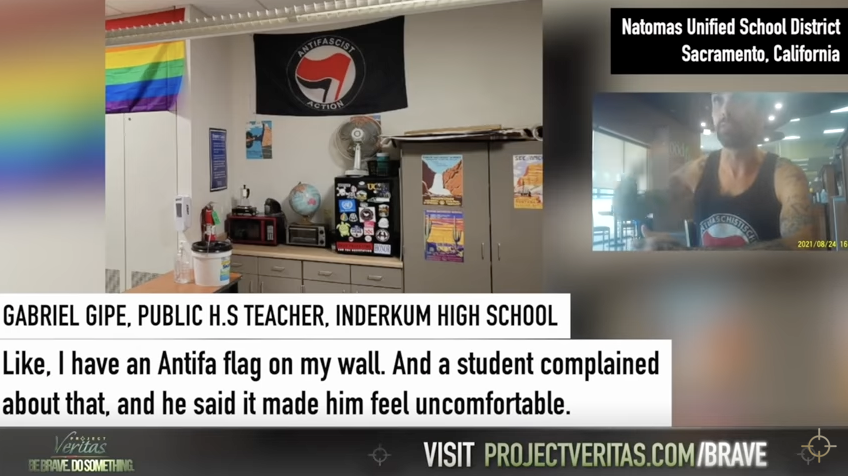 Though extreme in his bravado, Gipe is hardly alone. Increasingly, teachers unions have been bringing Critical Race Theory into the classroom, with the National Education Association going so far as to create a fund to defend members who teach the divisive lessons in violation of state law. As recently as last week, one of the most powerful union bosses in the country — United Teachers Los Angeles Cecily Myart-Cruz — said it was OK students didn’t learn math during the extended school closures because they instead learned about insurrections and riots. Another recent video shows a California teacher bragging that she removed the American flag from her classroom because “it made (her) uncomfortable” and instead has students pledge allegiance to the Pride flag.

These examples serve as harsh reminders that government unions of today are unrecognizable from unions of decades past — those that many think favorably of and will praise on this upcoming Labor Day. Government unions, particularly teachers unions that are led by Gipe and his contemporaries, are little more than political organizations that use their taxpayer-funded platforms to advance an agenda that ultimately hurts the people they’re intended to serve.

Fortunately, parents and union members themselves are pushing back. This week, parent pressure undoubtedly is responsible for Gipe’s pending removal, reminding us that parent voices matter. The time they spend testifying at school board meetings and mobilizing with other parents can make a real and immediate difference.

Union members themselves hold great influence over the course of their organization because they have the ability to speak in the way that matters most to government unions: with money. Since 2018, over 300,000 government workers have dropped union membership in California alone, costing unions over $240 million each year. This union exodus has already led the state’s largest government union — SEIU 1000 — to begin reforming the way it does business, starting by electing a new president who has pledged to get the organization out of politics.

Parents wanting to get involved in their own school districts should join the Parent Union today to connect with other engaged moms and dads, and government workers who’ve decided the unions of today don’t represent their interests can opt-out of membership by visiting MyPayMySay.com.

Chantal Lovell is the Communications Director at the California Policy Center.

The California Policy Center promotes prosperity for all Californians through limited government and individual liberty.

Good riddance to that doofus. Next: teachers unions