Please join us for a documentary screening, conversation and book signing with best-selling author Dennis Prager and Hollywood producer Mark Joseph for their new book and documentary, N 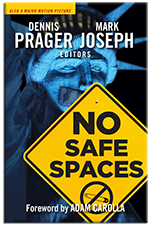 o Safe Spaces (Publish Date: September 3, 2019) on February 18 at 4:30 p.m. at the Ronald Reagan Presidential Library and Museum, 40 Presidential Drive, Simi  Valley. Admission to this event includes the purchase of one copy of No Safe Spaces. Additional copies of the book may be purchased during registration or at the event.

The Left’s extreme agenda of safe spaces and political correctness has led to a culture where free speech is squashed, and independent thought punished. The man behind the popular site PragerU, Dennis Prager, and the award-winning music and film producer, Mark Joseph, have teamed up to expose how college campuses have become the most dangerous places for ideas and liberty in America today. No Safe Spaces reveals shocking and sometimes violent evidence of how political correctness and identity politics has run amok on college campuses.