Dr. Ben Carson: Vaccines ‘A Giant Experiment’ On Our Children 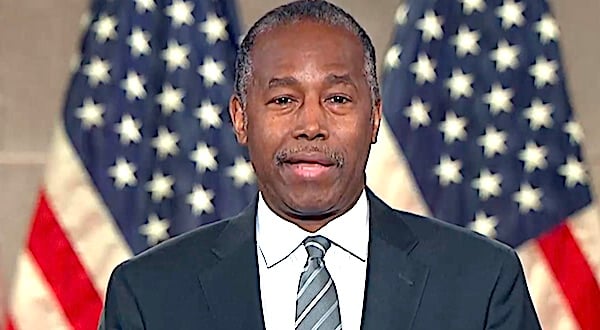 Dr. Ben Carson contends the Biden administration’s move to vaccinate young children for COVID-19 amounts to a “giant experiment,” arguing there is no sufficient data to determine the long-term risks posed by the shots.

“Do we want to put our children at risk, when we know that the risk of the disease to them is relatively small, but we don’t know what the future risks are? Why would we do a thing like that? It makes no sense whatsoever,” he said Sunday in an interview with Maria Bartiromo on Fox News’ “Sunday Morning Futures.”

Carson, renowned for his innovative surgeries to save the lives of children, is former director of pediatric neurosurgery at Johns Hopkins Children’s Center. He served as secretary of Housing and Urban Development in the Trump administration.

Bartiromo asked Carson whether or not young children should receive the COVID-19 vaccine.

“Absolutely not,” he replied.

The physician argued “the mortality rate for children from COVID-19 is 0.025, which is very similar to the rate for seasonal flu.”

“And we haven’t been for years and years going through all these things for seasonal flu,” he said.

“You look at the Cleveland Clinic study, 1,300 of their health care workers who had been previously infected, none of them got reinfected,” he said.

“So, I know the CDC is coming out with their recommendations and trying to spin things their way. But we ought to look at all of the data,” he said.

The CDC’s Advisory Committee on Immunization Practices will meet Tuesday to discuss clinical recommendations as a follow-up to the
the U.S. Food and Drug Administration’s approval last Friday of emergency use authorization of the Pfizer-BioNTech in children ages 5 to 11 years old.

The approval came one week after an FDA advisory panel voted 17-0 to recommended the vaccine for young children, despite acknowledging the lack of safety data and the nearly 100% survival rate from infection.

Approval by the CDC will allow the Pfizer shot to be administered to young children in two doses separated by three weeks. The 5-11 year-olds are to receive a lower dosage, 10mcg, compared to the 30mcg given to those 12 and older.

The FDA said Friday the “vaccine’s safety was studied in approximately 3,100 children age 5 through 11 who received the vaccine and no serious side effects have been detected in the ongoing study.”

However, during the advisory committee meeting, Dr. Eric Rubin, editor-in-chief of the New England Journal of Medicine, expressed the concern of many members about possible severe side effects that cannot yet be measured. He concluded, nevertheless, there was no other way forward.

“We’re never going to learn about how safe the vaccine is unless we start giving it,” he said. “That’s just the way it goes.”

Here some of the other health experts who believe children should not be vaccinated: