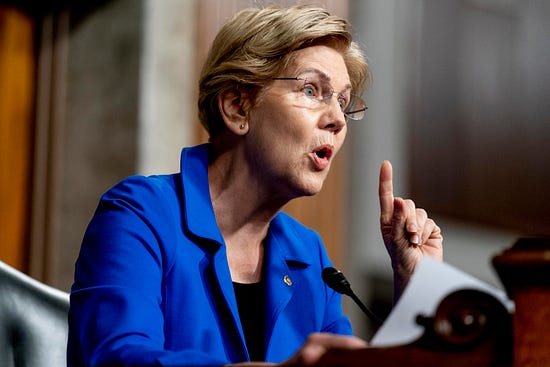 Warren entered the U.S. Senate in 2013 brimming with fresh ideas and so much promise.

Now, the failed presidential candidate is more like that one annoying uncle who does the same party trick at every family function. Except instead of doing lousy imitations or corny jokes, Warren’s party trick involves blaming every single solitary thing that is wrong in the U.S. economy on corporate greed.

For example, Warren this week blamed the rising cost of groceries on a sinister plot by Big Supermarket.

Sure, it’s possible grocery chains discovered the concept of price-gouging in the year of our Lord 2021. Or perhaps the increasing cost of groceries has something to do with rising inflation, which hit a 39-year high in November. Perhaps rising costs have something to do with the White House’s domestic and trade policies. Perhaps the mismanagement of the supply chain has likewise played a role in soaring prices. I’m just spitballing here.

This is Warren’s party trick. Whenever there’s an economic downturn, any time consumers suffer for the federal government’s meddling in economic policy, the senator alleges a shadowy conspiracy of corporate greed and private sector malfeasance.

Cost of gas got you down? Warren blames Big Oil.