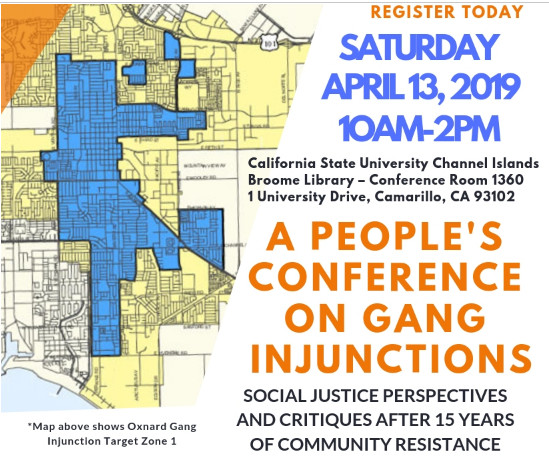 -Ivette Alé: Statewide Co-Coordinator of Californians United for a Responsible Budget (CURB) – a statewide coalition of 70 grassroots organizations that is reducing the number of people in prisons and jails, shrinking the imprisonment system, and shifting public spending from corrections and policing to human services is confirmed to set the framework for our discussion at this conference.

CONFIRMED – Keynote legal presentation by:
-Attorney Sean Garcia Leys, Esq of Urban Peace Institute – will address the conference on the current legal state of civil gang injunctions and some of the recent key cases impacting CGI’s across the state.

On the eve of 15 years since the Oxnard Police Department and Ventura District Attorney press conference announcement of the first ever civil gang injunction proposal in Ventura County – Join community organizations, activists, attorneys and youth intervention practitioners as they reflect on a decade and half of lived experiences in combatting and exposing civil gang injunctions (CGI) as militarization-style relics of the failed War on Drugs and War on Gangs.

Beginning in the early 2000’s, communities across the state – from Sacramento to San Diego, Bay Area to Los Angeles – have been challenging civil gang injunctions by engaging in a series of political and legal fights that have ultimately led to major precedent-setting court decisions such as the Orange County case of Vasquez v. Rackauckas and the Stanislaus County case People v. Sanchez. These rulings have begun the unravel serious due process, constitutional rights considerations related to the restrictions of freedom of movement and association, as well as curbing police powers in determining who and how one gets swept into these gang injunctions.

Every community and legal challenge sets up new platforms for directly impacting the scope of these CGIs – for example, the Oxnard CGI court decision a decade later helped a young man from Los Angeles sue the City of LA and LAPD challenging the curfew provisions which ended in settlement of $30 million dollars to be diverted into youth and job training. There have also been communities, such as Santa Barbara, where residents led a campaign to stop the proposed gang injunction in its tracks. Now with both community resistance and legal challenges many cities and counties across California are beginning to completely abandon this Jim Crow style ‘suppression tactic’.

In Oxnard, CA – Police and Ventura County District Attorney are pressing to keep remnants of the gang injunction in tact but are now headed back into court challenge – and this conference is just three days before the next hearing to be held on April 16th in in the Ventura County Superior Court.

This PEOPLE’S CONFERENCE ON GANG INJUNCTIONS: Social Justice Perspectives and Critiques after 15 Years of Resistance aims to bring together communities across the state to cross-share their experiences and lessons learned – continue to raise alternatives to criminalization, as well as provide students and youth an opportunity to research, document and become involved in the next wave of movements toward criminal justice reform.

Organized by C.O.R.E.
Co-Hosted by: Chicana/o Studies Department at CSUCI and Danza Tlaloc Ollin at CSUCI.