Players to debut Tony-winning play, “The Curious Incident of the Dog in the Night-Time”

Theatrical plays often take audiences on a journey through the eyes of a storyteller, but with the latest show staged by the Conejo Players, the perspective and the visual storytelling tell a tale that is relevant, provocative, exciting and totally unique.

On Sept. 2, the Conejo Players Theatre will debut “The Curious Incident of the Dog in the Night-Time,” a modern, Tony-winning play based on the novel by Mark Haddon.

The play follows 15-year-old Christopher Boone, a young lad who is exceptional at mathematics but ill-equipped to interpret everyday life. He has never ventured alone beyond the end of his road, he detests being touched and he distrusts strangers. Now it is 7 minutes after midnight, and Christopher stands beside his neighbor’s dead dog, Wellington, who has been speared with a garden fork. Finding himself under suspicion, Christopher is determined to solve the mystery of who murdered Wellington. But his detective work, forbidden by his father, takes him on a thrilling journey that upturns his world.

Director Tanner Redman leads the cast of nine through all the twists and turns of the story, delivering it in a compelling and technologically exciting way.

“’The Curious Incident is a storyteller’s piece without any clear stage directions in the script,” said Redman.“It therefore allows us to showcase the unique characters and highlight a quickly and ever-changing world, where the actors morph from one character to another building locations in front of your eyes to tell this fast-paced tale of discovery and adulthood.”

Using various visual and audible storytelling methods, the audience will be transported inside the head of Christopher, and see life through a different set of eyes. Leading the cast is Benjamin Lynch as Christopher, Patrick Rogers as Christopher’s father Ed and Melissa Harkness as Siobhan. The show includes strobe lights, fog effects and live animals, including Christopher’s pet rat Toby.

“The Curious Incident of the Dog in the Night-Time” opens Sept. 2 and runs Fridays and Saturdays at 8 p.m., Sundays at 2 p.m. with a special Thursday performance on Sept. 8 at 8 p.m. through Sept. 24.

The Conejo Players Theatre is located at 351 S. Moorpark Road in Thousand Oaks. For tickets or more information visit conejoplayers.org or call the box office at 805.495.3715. 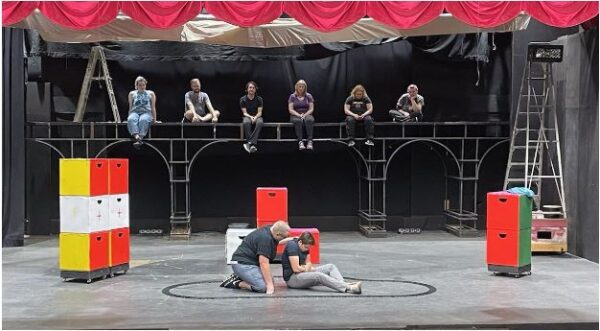 CAPTION: The cast of Conejo Players’ “The Curious Incident of the Dog in the Night-Time” runs a scene during a recent rehearsal. The show opens Sept. 2, for more information visit conejoplayers.org