One month ago, when the world was gripped by the crisis involving China’s 2nd largest property developer Evergrande, we said that “Beijing will pay local bondholders and soft nationalize Evergrande, but will avoid allegations of backsliding on tightening/deleveraging promises and and “common prosperity” by stuffing foreign creditors.”

Brilliant: Beijing will pay local bondholders and soft nationalize Evergrande, but will avoid allegations of backsliding on tightening/deleveraging promises and and "common prosperity" by stuffing foreign creditors.

Since then, that’s precisely what has happened with the company making one onshore coupon payment while withholding all payments to offshore creditors. Then, overnight, Reuters reported that Hengda Real Estate Group, Evergrande’s flagship unit, has remitted funds to pay an onshore bond coupon of 121.8 million yuan ($19 million) due on Tuesday. Citing sources, Reuters noted that the company needs to prioritize its limited funds towards the domestic market where the stakes are much higher for the country’s financial system.

And while Evergrande scrambles to squeeze every last drop of liquidity as it seeks to at least repay local creditors and holders of WMPs, things are going from bad to worse for the company whose deal to sell a 51% stake in its property services unit has been put on hold, Reuters also reported, “in a blow to the embattled developer’s hopes of avoiding a potentially disruptive default.”

The company had been in talks to sell the stake in Evergrande Property Services to smaller rival Hopson Development Holdings for around HK$20 billion, sources previously told Reuters. However, the deal, which was set to be the biggest asset sale for the company, has been put on hold as it has yet to win the blessing of the Guangdong provincial government, which is overseeing Evergrande’s restructuring, one of the people said on Tuesday. While, it was not immediately clear why the Guangdong provincial government has not approved the Evergrande Property Services transaction, some of Evergrande’s offshore creditors had also opposed the deal, Reuters sources added. Another source said the announcement of the deal will be delayed, pending China’s regulatory approval. The deal has already won Hong Kong Stock Exchange’s special approval.

Yet while Evergrande has been careful not to impair local creditors, offshore bondholders have little to look forward to: an Evergrande bond due March 23, 2022 will officially be in default on Oct 23 when the 30-day grace period for a missed coupon payment that had been due on Sept. 23 expires.

Still, and somewhat paradoxically, the wider offshore bond market has responded positively despite a crippling slowdown in China’s property market after soothing words from China central bank’s and coupon payments by two other major developers. An index of China high-yield debt which is dominated by property developer issuers, has seen spreads tighten from last week’s record levels to around 1,484 points on Tuesday. 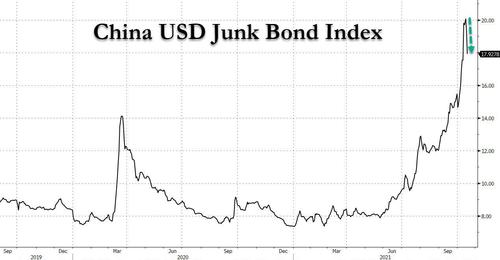 The move was catalyzed in large part by another local property giant, Sunac China, which has a $27.14 million payment due Tuesday, and which has paid its bondholders, a source with knowledge told Reuters. At the same time, Kaisa Group said on Monday it had also paid a coupon due Oct. 16 and it plans to transfer funds for a coupon worth $35.85 million due Oct. 22 on Thursday.

Bonds from Chinese developers that gained on Tuesday included Modern Land’s 2022 bonds which bounced over 8% to 40.250 cents on the dollar, while Central China Real Estate’s 2024 bonds climbed over 5% to 44.843 cents.

It was not all good news, however, and on Monday, smaller developer Sinic Holdings defaulted on $246 million in bonds as expected; It had previewed the default last week, saying it did not have sufficient financial resources

In an attempt to ease mounting concerns about China’s sudden property deep freeze, in the past few days, the People’s Bank of China has said spillover effects on the banking system from Evergrande’s debt problems were controllable and that China’s economy was “doing well”. Just like what we heard around the time Lehman failed.