By Emily Zantow and Alex Swoyer – The Washington Times 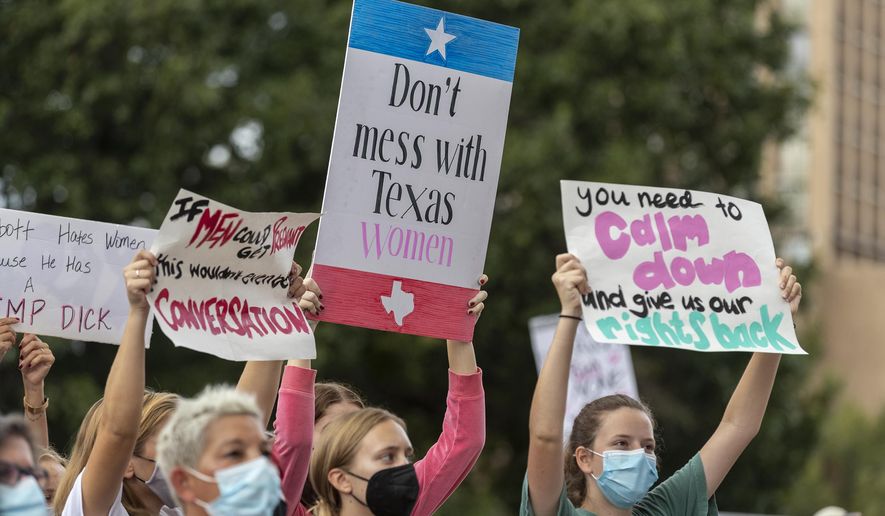 A federal appeals court temporarily reinstated Texas’ fetal heartbeat law on Friday that bans abortions in the state after a fetal heartbeat is detected, which can occur as early as six weeks of pregnancy.

The 5th U.S. Circuit Court of Appeals reversed a lower court’s order halting the law from being enforced earlier this week.

The order issued Friday will remain in place as the litigation continues — unless the court decides to lift it, reinstating the injunction. The three-judge panel told the Biden Justice Department to respond to Texas’ appeal by next Tuesday.

The three-judge panel who will review the dispute between Texas and the federal government includes Judge James Ho, a Trump appointee, Judge Catharina Haynes, a Bush appointee, and Judge Carl Stewart, a Clinton appointee.

The state took its case to the New Orleans-based federal appeals court after U.S. District Judge Robert Pitman, an Obama appointee, blocked the law, siding with the federal government earlier in the week, which argued it ran afoul of federal law granting the national right to an abortion.

The Texas law bans abortion at around six to eight weeks of pregnancy, which is about the time a fetal heartbeat is heard.

But the Justice Department said Supreme Court precedent dating back decades gives women a right to an abortion up until a fetus is viable, which is usually around 24 to 28 weeks.

Under the law, known as Senate Bill 8, state officials don’t enforce the abortion ban, but private citizens can sue if they have knowledge a provider illegally performed an abortion after a heartbeat was detected.

Abortion clinics had largely stopped performing abortions in the state when the law went into effect Sept. 1, concerned over lawsuits being filed by pro-life activists.

After Judge Pitman blocked the law earlier this week, some providers momentarily resumed their services.

Pro-life advocates cheered the 5th Circuit’s move to reinstate the heartbeat ban — at least for now.

“Every day this law is in effect, unborn children with beating hearts are saved and mothers are protected,” said Marjorie Dannenfelser, president of the Susan B. Anthony List.

Nancy Northup, president of the Center for Reproductive Rights, which has challenged the Texas law in separate litigation, said the Supreme Court must step in and “stop this madness.”

“Patients are being thrown back into a state of chaos and fear, and this cruel law is falling hardest on those who already face discriminatory obstacles in health care, especially Black Indigenous, and other people of color, undocumented immigrants, young people, those struggling to make ends meet, and those in rural areas. The courts have an obligation to block laws that violate fundamental rights,” she said.

The Supreme Court declined to block SB 8’s enactment last month, leaving the legislation in place while litigation against it continues in lower courts.

Abortion providers challenged the law initially — prior to the Justice Department filing its separate lawsuit — and the providers have asked the high court to get involved before a lower court issues a ruling.

The justices, in declining to halt its enforcement, did not resolve whether the law was constitutional, but the court noted the abortion providers fighting it had sued defendants who are not likely to enforce the law.

The abortion providers had sued state and local officials, but under SB 8, it would be private citizens bringing the lawsuits against the providers. Anyone who successfully sues someone who assists in an abortion after six weeks would receive at least $10,000.

Their case is also currently pending before the 5th U.S. Circuit Court of Appeals.

Since the Supreme Court decided in 1973 that women had a right to abortion in the case of Roe v. Wade, pro-life advocates and conservative states have aimed to chip away at that ruling.

Texas is not alone in its recent attempt.

The Supreme Court has agreed to decide if Mississippi’s ban on abortion after 15 weeks runs afoul of its Roe ruling during its new term, which began last week. The case will be heard in December with a ruling expected in June.

Unlike in the Texas case, lower courts blocked the Mississippi law from taking effect, but the Supreme Court agreed to review that move.