Classes at Santa Paula High School will be canceled through Tuesday due to a fire at the gym, school officials said Sunday.

“This is one of the biggest fires we’ve had in the city of Santa Paula in about 50 years,” said Ventura County firefighter Andy Van Sciver.

According to officials, the Bryden Gym sustained major damage in the fire on Sunday morning. 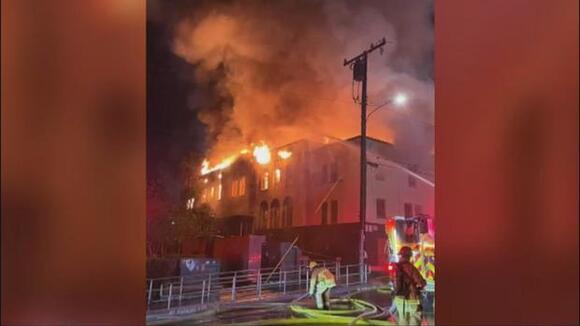 The fire broke out shortly after 1 a.m. resulting in multiple fire agencies reporting to the scene. At its height, the fire prompted the evacuation of some nearby homes.

“I thought I heard a door slamming but it was the building collapsing,” said neighbor Johnny Delarosa.

Some owners took matters into their own hands, using hoses to spray water onto their homes.

“We went outside and the whole building was just engulfed in flames,” said neighbor Eva Gonzalez. “It was just a very, very hot fire. Just looking at it you knew there was no way to save the gym.”

The cause of the fire was not immediately known and remained under investigation.

The gym was built in the 1930s and was well-known in the community. The school’s principal called the fire “heart-wrenching.”

“It’s heartbreaking,” said principal Elizabeth Garcia. “It was a beautiful building. We have a beautiful school. It’s a historical site in Ventura County.”

“It’s pretty devastating,” said Gonzalez. “I lived here in Santa Paula all my life. I went to this school here. And to see this happen it’s just unreal.”

Despite the heartbreak, school officials say the school and community are tough.

“We will bounce back like we always do,” said assistant principal Daniel Guzman. “Together, we will rebuild and we will make it bigger, better, stronger.”