Gavin Doesn’t Get It

No one has informed Gavin Newsom that the 2018 election is over. It is now time to stop blaming straw men for preventing him from properly administering the 5th largest economy in the world.

Just prior to the Thanks giving Holiday  Newsom sent out an email  which promised to enact stronger rent control, make health care more accessible,  remove restrictions on abortion, and improve public education.

These platitudes belong in campaign speeches and fliers; but I guess we should have been grateful that for the first time in nine years, Newsom did not ask for campaign contributions just prior to Turkey Day

Hey there — did you see Gavin’s note yesterday?

Gavin is standing up to Trump’s dangerous agenda at every turn, and he needs your help to keep fighting.

We have an important fundraising deadline at midnight tonight, and we’re falling short of our goal. Will you pitch in to help us close the gap?

We can ask why is Newsom asking for campaign donations when he doesn’t run for re-election for 3 years? What part of Gavin Newsom’s duties as governor have him “standing up to Trump’s dangerous agendas” as part of his job title?  Should we spring for failed efforts to keep the President off the  California primary ballot next year? 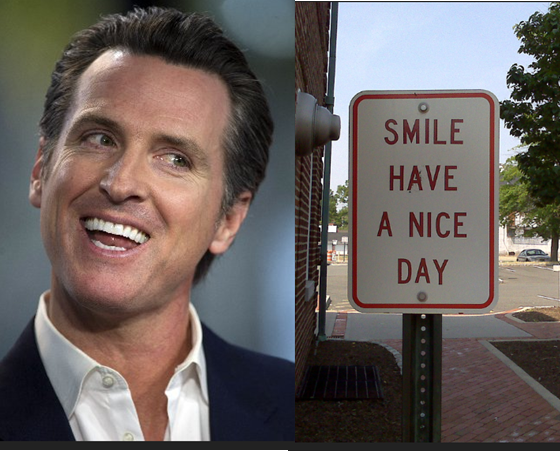 What do the Governors recent communications with constituents mean?  Are we to assume this email is the first salvo in Newsom running for President in 2024?  Such a strategy didn’t matter when he was Lt. Governor because there wasn’t much to do being second banana to Jerry Brown.  One wonders if Newsom has better things to do in carrying out his elected post than endless fundraising and attacking the administration in Washington D.C.?

Since taking office to appease his leftist base Newsom has continued to be a champion of Progressive issues beyond Gay Marriage, LGBTQ rights, Sanctuary Cities, and unwavering support of labor unions.   This has included:

This is all great but being a Cheerleader for social change and increased power emanating from Sacramento, isn’t exactly what the middle class desires.  They want good jobs, affordable transportation, housing, inexpensive energy, a decent education for their kids, lower taxes, and a comfortable life style.

Nowhere in any of Gavin Newsom’s policies is there even a faint discussion of the alarming trends of blue collar and white collar jobs leaving California each week for other places.  At the same time he is championing a $15.00 plus minimum wage and the passage of AB-9 that mandates independent contractors such as owner operator Uber and truck drivers join a union instead of choosing to operate a small business.

The list goes on with his support for the new gas tax and efforts to repeal it. Newsom’s victory on this matter may be hollow next year when a new increase per gallon goes into effect.  Making matters worse voters are being asked throughout the state to pass additional transportation local sales taxes.  It must be questioned when will a saturation point be reached when voters will reject these proposals?

This brings us to another sensitive subject that Governor Newsom has avoided discussing which is increasing pension costs for government workers throughout the State.  Instead of pushing for reform as his predecessor Jerry Brown meekly attempted, Newsom is trying a band aid approach favored by his union supporters.

Knowing that cities and counties are having their contributions to CalPERS double in the next few years, Newsom’s future strategy is likely putting most   of the States surplus revenue to bolster CalPERS and CalSTERS…  At the same time local governments facing the Hobson’s Choice between cutting services or raising sales taxes to pay for mandated pension fund contributions.

Nowhere in the Newsom agenda, is there even a faint mention of job creation other than a fantasy narrative that The Green New Deal and Gig economy is going to replace traditional business enterprises that have created what has been termed the Golden State.

Meanwhile frustration is growing in the ranks moderate Democrats, Independents, and Republicans, that the Governor is leading the State into the ground. According to the non-profit Public Policy Institute of California His (PPIC), Newsom’s public opinion ratings have trended downward. Since taking office, disproval of his performance has gone from 29% to 45%.

While such a low level of support for an incumbent governor is not unprecedented, it is definitely a warning sign that Newsom has ventured a bridge too far left.

A bell weather issue for him in the coming year will be the repeal of the split roll provision of Prop 13 exempting businesses from having a tax rate based on a lower level when their real estate was purchased.  While Newsom and his progressive supporters claim the additional 16 billion or so raised would bolster public education and local services, there is increased concern that passing this initiative would result in further job losses the state cannot absorb.

There is also a negative Prop 13 argument that why does the state continue to raise taxes when they already have a large surplus for next year?  Not even mentioned is  with all of the new taxes, the wealthy 1% who contribute a large proportion of the state’s revenue base, will opt to move elsewhere.

Gavin Newsom might want to reconsider his tax and spend ways because things can quickly turn against office holders in California as Gray Davis learned when he was recalled in 2003.

Politics and Climate change have more in common than one might imagine.  Things can get hot or cold in a heartbeat.

Moving from California to Texas for the “wealthy” isn’t quite as wrenching as moving from the U.S. to Monaco or some other foreign tax shelter. According to one source, California is already one of the leading states with population outflow. Gabby Nuisance is liable to nail down the lead by a wide margin.