Sermon delivered with protests and counter-protests outside the church

“I welcome you…God bless you; but unless God calls you (here), the church you left needs you. The pastor not standing; needs you. Take the Good News and speak it to other lives. Challenge your shepherds to awaken. It is a critical time to stand.  I am not interested in becoming the largest church in America. Take this message with two feet reaching into every nook and cranny in this community and in your communities.”

Pastor McCoy’s recounted in a Sunday message taken from Acts 8:1-3 that Saul—the Christian persecutor and hater—had just finished orchestrating the killing (by stoning) of Stephen, the first Christian martyr.  “At that time a great persecution arose against the church which was at Jerusalem; and they were all scattered throughout the regions of Judea and Samaria…as for Saul, he made havoc of the church, entering every house, and dragging off men and women, committing them to prison.”

According to Pastor McCoy, reeking “havoc” is translated from the Greek as “a wild animal tearing apart another animal and shredding it viciously.”  He said it was like what Nazi troops (SS soldiers) did in Germany during World War II as they pulled Christians (and Jews) out.  The SS soldiers were Adolf Hitler’s personal bodyguards, and later became one of the most powerful and feared organizations in all of Nazi Germany led by anti-Semite Heinrich Himmler (1940-1945) with more than 250,000 members and multiple sub-divisions.

“Today we have two ideologies:

“These two ideologies have established themselves in the hearts and souls of men.

“Someone has to stand up and say ‘enough is enough. We do not consent. We stand. We might have to pay for this disobedience: a fine of a thousand dollars a day. The water might be shut off. The power might be shut off. We might be evicted. But we declare that we are free and that not one gets in the way of our relationship with the Lord.”

The disciples of the Lord which by Acts 8 had grown to 15,000 around the world were persecuted. “Persecution to the church is like a wind to a seed. It causes you to spread.”

Jesus’ disciples were speaking “freedom and liberty. They were speaking this Good News of God. There were no Billy Grahams or Greg Lauries. They were simply people like you. Each individual was making a decision each day with wisdom speaking into the lives of others.

“As we watch Antifa burn our cities; as we watch anarchy; as we watch statues torn down; cities burned; and government officials not oppose it; we remain challenged.”

Congressman Bob McEwen: President Reagan was not about containment; but about transcending communism

This officially happened first in Poland which was the first formed non-communist government in the region in decades. Hungary followed. Then came more peaceful transitions from communist party rule in Central and Eastern Europe in the second half of 1989. The official demolition of the Berlin Wall was on June 13,1990 (completed in November 1991).  Lech Walesa became president of Poland on Dec. 22, 1990 representing Solidarity candidates.

“The Berlin Wall dividing East and West (came down when) young people recognized that free markets were best… Freedom is never free. It never sleeps.”

has imposed these draconian laws?

“These are acts of tyrannical power. There is nothing in the Constitution. This (upcoming) election is the most important of our lifetime. Our freedoms could evaporate in only 100 days.”

When Thomas Paine wrote Common Sense (1775-1776), he said: “These are the times that try men’s souls. Tyranny is not easily conquered. What we obtain too cheaply, we esteem too lightly. The choice we have is victory or death.” George Washington spoke on how “our rights come from God who protects life and liberty.”

2)        How do you feel about the tearing down of our community monuments. Is it ethical?”

“God made us all equal. Remember, slavery was universal. Slavery has been an

anathema to our nation. But it was Democrats in the South who looked at skin color and denied people rights. It took over 100 years. We can’t blame America. It was one political party (the Democrats).”

“This is an unique opportunity. We have 100 days to save this Republic. The enemies of the Republic have exposed themselves. The world is looking for America to lead. The media has exposed itself. Higher education has exposed itself.”

“A constitutional Republic only survives when moral people participate,” said Pastor Rob McCoy. Apathy is only the consent to be enslaved.  Just in California, we have 15.2 million evangelicals, but only half of those are registered, and only half of that group even votes. Go register and vote. You can only vote yourself into socialism. You can only shoot yourself out.”

Pastor McCoy stated that he looked at candidates and asked three questions:

“The church is to a place of liberty. Christ came to set people free,” said Pastor McCoy.  The church service ended with Congressman Bob McEwen leading the congregation in singing “God Bless America.”

There was joyous singing in the church today. 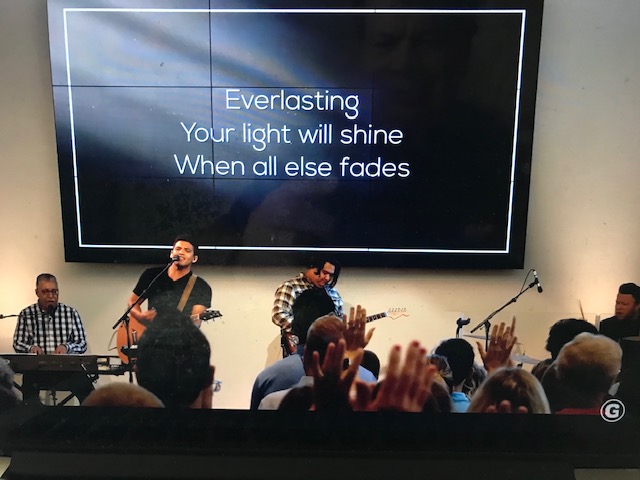 Protest photos by citizen reporter, Beverly Wurts.  Ms Wurts reported that there were five protesters against the church, eight in support. 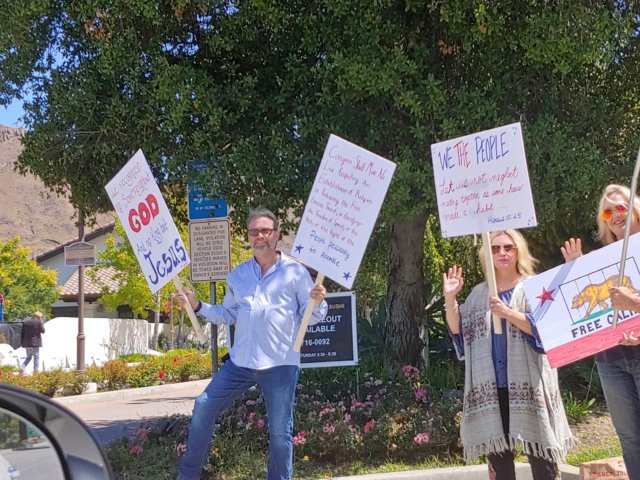 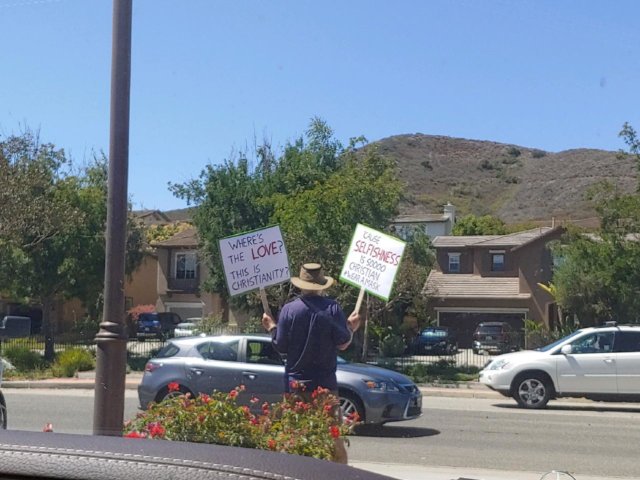 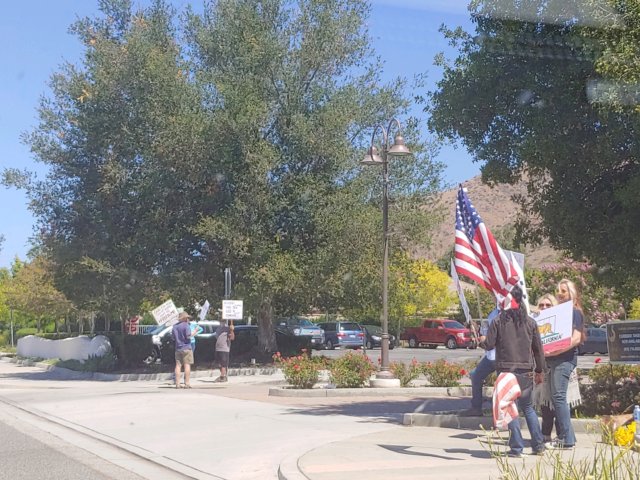 This kind of rhetoric leaves me speechless and overwhelmed.

If this is what Christianity represents, it is a sad day for the rest of us. However, I refused to believe that all Christians believe these pastors. Speak up, please, if you do not agree. I come from holocaust survivors.

The devil comes in many shapes, good folks. And those telling you to forget the greater good so you can meet your own needs, religious or otherwise, are not Godly.

So let’s just suppose that the people who study epidemics as their life’s work are right and gathering in large groups in enclosed spaces for extended periods and singing create prime conditions for a super-spread of the virus.

When your members are subject to the same triage rules as everyone else because won’t be enough ICU beds to accommodate all the people you spread it to, are you going to cry out that you are being discriminated against because of your faith?

Except it won’t just be you, will it? It will also be the loved ones of the people you spread it to before you know you have it–you know, while you’re all flush with your victory at flouting the law and human decency.

That really is some powerful testimony!

Good to see that several area pastors are standing up for the Republic and calling out the traitors who are actively undermining it. Yes, not politically correct or popular, but more and more people are realizing that it is right.

The “Portland tactics” referred to by other posters here relate to the suppression and arrest of violent rioters. These are not “peaceful protesters,” as the Leftmedia propagandizes. If peaceful protesters are caught in the middle when violence by others causes it to be declared an illegal assembly, they need to leave immediately, or suffer the consequences.

Such nonsense. Go tell those middle-aged moms getting tear gassed in the street that they’re “violent rioters.” (Better yet, don’t; they’re braver, bolder and smarter than you’ll ever be, and one of them might sock you in the jaw.) Has your taste for fascism — and McCoy’s — become so strong that you don’t recognize Trump’s thugs for what they are: the modern-day equivalent of the brownshirts? Clearly it has.

McCoy is a common criminal at this point. Thank goodness he no longer poses as a political leader while he endangers his community. His only remaining relevance in the world is to the congregants he’s stupid and selfish enough to send out into the world to infect and perhaps kill others, after a packed gathering featuring group singing (both well-known superspreaders of COVID-19).

So as he brings up the SS of Nazi Germany so to does not our president institute the same tactics in Portland. I do not think that is what he was getting at but take his sermon and run with it how you may, but if the shoe fits it fits! Religion has been used to control and more violence and atrocities has been done in the name of God than all wars combined how does that correlate to morally good. I too often here about religious freedoms but too do not those who ascribe to this philosophy use religion to diseriminate against those who do not follow their path. A true free society treat all as equal and allows all to coexist peacefully. I care not if those who go to church get infected but I do care that their choice put others at risk with no considerations which is prideful and a sin according to their teachings.

Would it be possible to rewrite all the above so that a reader could understand
exactly which speaker spoke which words? And which words are the opinion of the reporter? Maybe use different colors for each speaker, put quotation marks around words actually spoken, and not use boldfaced words randomly?

Also…..is this a news story or an opinion piece?

Sorry to ask for so much…I guess it’s my ADD. It’s “reeking” havoc with my mind.