Godspeak Pastor Rob McCoy: “They did the right thing; the wrong way: Five Facts about COVID-19”

NEWBURY PARK—“They did the right thing; the wrong way,” said Godspeak Pastor Rob McCoy referring to both COVID-19 and Acts 1:12-19 when the disciples chose to replace Judas Iscariot with Matthias in the Upper Room prayer meeting.  “Doing the right thing the wrong way is understandable and forgivable but to continue the wrong way when you know what is the right way is to fear evil more than God.

“Never in the history of our nation have we been faced with a national lockdown.  Now we are watching citizens rising up.  We’re seeing the nation divided and we are all standing on either side of the aisles trying to understand what is going on?

“Why in California, we can’t enjoy the beach where the virus dies in sunlight and warm weather?   But we are supposed to be isolated, muzzled and separated.  Neighbor is against neighbor.  We are forced to wear masks in supermarkets.   Masks are not obligatory; but we face social shaming.

“When is enough, enough.  How is doing the right thing becoming a problem?  This is not partisan.  It is not a Democrat nor a Republican issue.  Not a Tea Party nor Indivisible: Conejo issue.  I don’t see this as left, center, or right.  We are Americans.  We possess certain unalienable Rights.

“Skateboarders and surfers who love the environment and love to surf have been shut down.  Now, everyone is unifying.  When something is taken away from us, we see how precious it was to possess.

“Those that desire to manipulate us, do it by deception with statistics that paralyze us in fear which cause us not to examine things.  Would you surrender your liberties and freedom for security from things you fear?  I am looking at the beach folks.  Where are the churches?  the pastors?  The surfers and skaters are inspiring Christians to stand forth in liberties that God has set us free.”

In his sermon,  Pastor McCoy  said the plan of God  was to name  Paul an apostle.   The disciples problem was that they did not wait for the Promise of the Father to “receive power when the Holy Spirit has come upon you” (Acts 1:4, 8).  It was Stephen’s sermon (he was one of the seven chosen a little while later) that offended the Jews and resulted in his stoning with Saul (later to be called Paul) watching (Acts 7:54-60).  According to Pastor McCoy, Paul was never recognized as he should have been by the other disciples—the last guy they would have chosen because of his killing Stephen.

Today, with COVID-19, “the tide is changing because everything we were told by our leaders is not true.  We submitted to them.  We wanted to save as many people as possible.  The data models and projections came out and frightened us.  We went to great lengths to obey.

“This was unlike anything we have seen in our lifetime.  We were doing the right thing; the wrong way. But our leaders today; are doubling down and shaming, muzzling, imprisoning, censoring. This is dangerous.

“Power is more important to them than the truth.   The people want their freedom.  It will be a handful of people that will turn the world right-side-up.  Truth will always prevail.” 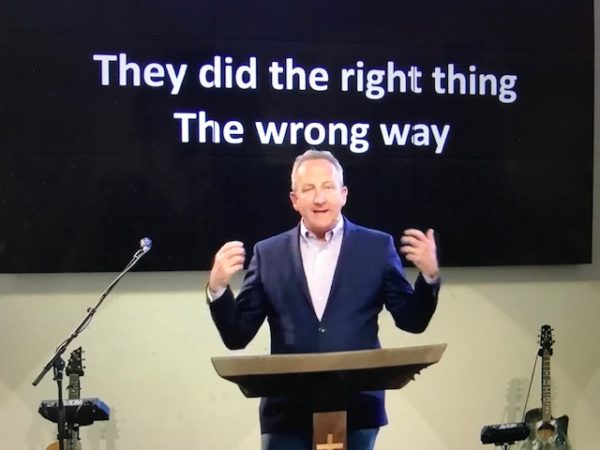 Fact 1:  The overwhelming majority of people do not have a significant risk of dying of COVID-19.

“The recent Stanford University antibody study now estimates the fatality rate if infected is likely 0.1 to 0.2 percent, a risk far lower than previous World Health Organization estimates that were 20 to 30 times higher and that motivated isolation policies in New York City, an epicenter of the pandemic with more than one-third of all U.S. deaths.  The rate of death for people 18 to 49 years old is 0.01 percent or 10 per 100,000 in the population.   On the other hand, people aged 75 and older have a death rate 80 times that.  For people under 18 years old, the rate of death is zero per 100,000.

“Of all fatal cases in New York state, two-thirds were in patients over 70 years of age, more than 95 percent were over 50 years of age; and about 90 percent of all fatal cases had an underlying illness.  Of 6,570 confirmed COVID-19 deaths fully investigated for underlying conditions to date; 6,520 or 99.2 percent had an underlying illness.  If you do not already have an underlying chronic condition, your chances of dying are small, regardless of age.  And young adults and children in normal health have almost no risk of any serious illness from COVID-19.”

“We can learn about hospital utilization from data from New York City, the hotbed of COVID-19 with more than 34,600 hospitalizations to date.  For those under 18 years of age, hospitalization from the virus is 0.01 percent, or 11 per 100,000 people; for those 18 to 44 years old, hospitalization is .01 percent.  Even for people ages 65 to 74, only 1.7 percent were hospitalized.  Of 4,103 confirmed COVID-19 patients with symptoms bad enough to seek medical care, Dr. Leora Horwitz of NYU Medical Center concluded “age is far and away the strongest risk factor for hospitalization.

“Even early WHO reports noted that 80 percent of all cases were mild, and more recent studies show a far more widespread rate of infection and lower rate of serious illness.  Half of all people testing positive for infection have no symptoms at all.  The vast majority of younger otherwise healthy people do not need significant  medical care if they catch this infection.”

“We know from decades of medical science that infection itself allows people to generate an immune response—antibodies—so that the infection is controlled throughout the population by “herd immunity.”  Indeed, that is the main purpose of widespread immunization in other viral diseases—to assist with population immunity.  In this virus, we know that medical care is not even necessary for the vast majority of people who are infected.  It is so mild that half of infected people are asymptomatic, shown in early data from the Diamond Princess ship, and then in Iceland and Italy.  That has been falsely portrayed as a problem requiring mass isolation.

“In fact, infected people without severe illness are the immediately available vehicles for establishing widespread immunity.  By transmitting the virus to others in the low-risk group who then generate antibodies, they block the network of pathways toward the most vulnerable people, ultimately ending the threat.  Extending whole-population isolation would directly prevent that widespread immunity from developing.”

Fact 4:  People are dying because other medical care is not getting done due to hypothetical protections.

“Critical health care for millions of Americans is being ignored and people are dying to accommodate “potential” COVID-19 patients and for fear of spreading the disease.  Most states and many hospitals abruptly stopped “nonessential” procedures and surgery.  That prevented diagnoses of life-threatening diseases, like cancer screening, biopsies of tumors now undiscovered and potentially deadly brain aneurysms.”

“Treatments, including emergency care, for the most serious illnesses were also missed. Cancer patients deferred chemotherapy. An estimated 80 percent of brain surgery cases were skipped.  Acute stroke and heart attack patients missed their only chances for treatments, some dying and many now facing permanent disability.”

Fact 5:  We have a clearly defined population at risk who can be protected with targeted approach.

“The overwhelming evidence all over the world consistently shows that a clearly defined group—older people and others with underlying conditions—is more likely to have a serious illness requiring hospitalization and more likely to die from COVID-19.   Knowing that it is a commonsense achievable goal to target isolation policy in that group including strictly monitoring those who interact with them.   Nursing home residents, the highest risk, should be the most straightforward to systematically protect from infected people, given that they already live in confined places with highly restricted entry.”

(Editor’s Note:  Viewers can tune to Pastor Rob McCoy’s daily 7 p.m. “Fireside Chat” by going to the church website at:  https://godspeak.com/ and clicking Godspeak livestream to go to the church You Tube channel and view Sunday’s complete church sermon or Sunday’s “Fireside Chat” Episode 46.  The five facts on COVID-19 presented by Pastor Rob McCoy can be viewed at 1:04 minutes into the livestream.) 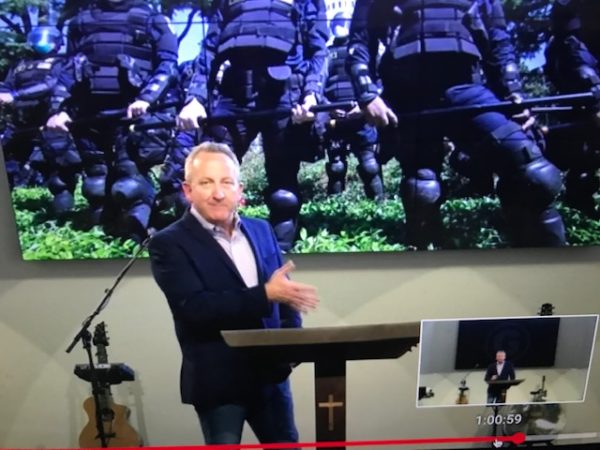 “Why in California, we can’t enjoy the beach where the virus dies in sunlight and warm weather?” – It seems like “Dr. McCoy” knows more about the virus than others… Maybe he can educate “Mr. Fauci”…

This maniac needs to shut up and leave the county. He knows nothing about god let alone about science.
Please people don’t follow this brain washer all he wants is power.

I admire a man of his convictions….