Camarillo, CA – The 28th Annual Care for Kids Golf Classic hosted by the Rotary Clubs of Camarillo took place on Monday, September 28th at Spanish Hills Country Club. The funds raised benefited Casa Pacifica Centers for Children and Families and its programs that serve foster and at-risk youth, along with other Rotary Foundation charities. This year’s tournament honored longtime Rotarian and Tournament Co-Chair Kevin Nunn. Kevin Estes, returned to co-chair the tournament along with Nunn. Advanced Motion Controls also returned as the tournament Title Sponsor.  The Care for Kids Golf Classic is one of Ventura County’s longest running charity golf tournaments and has raised significant funds for Casa Pacifica and other local charities. Tournament co-chair Kevin Estes said, “It’s a fun day of golf and raising money for the children.”

COVID-19 precautions were taken to keep the 124 golfers safe throughout the day, including mask requirements and temperature checks during check in, social distancing reminder signage, and extra carts for golfers to maintain social distancing while playing. “Everyone was so excited to see each other and play, for many of them it was the first tournament they’ve played in all year,” said Casa Pacifica Chief Development Officer and Camarillo Rotarian Carrie Hughes.

Several on-course competitions throughout the day included longest drive and closest to the hole contests. Longest drive winners included Dustin Long, Ben Golemon, Sean Gallagher, George Bryson, and Angela Berrett. Dustin Long and Brian Campbell had nice shots to capture the win on the closest to the pin contests. The million-dollar shootout gave five lucky golfers one chance at a hole-in-one shot from 150 yards out but alas, no million-dollar payout. Plenty of food and drinks throughout the course – Mister Softee, 8th Devil Distributing, margaritas, Bloody Mary’s, Firestone Walker, and Cappuccino Express, kept players golfing through the afternoon in high spirits. Old Oaks Cigar Company was also on hand gifting golfers cigars for their enjoyment. The on-course lunch – a sandwich, pasta salad and chips, was provided by Ameci Pizza Kitchen of Camarillo.

Due to the ongoing pandemic, tournament organizers cancelled the traditional cocktail hour and sit-down dinner and instead opted to send golfers home with Wood Ranch gift cards. Former County Supervisor and longtime Rotarian Kathy Long, emceed the program via Facebook live. The silent auction went online this year, offering non-golfers a chance to bid on the extensive array of items. Popular items included lunch and tour with the Ventura County Sheriff Bill Ayub, a Porsche driving experience, and diamond jewelry. 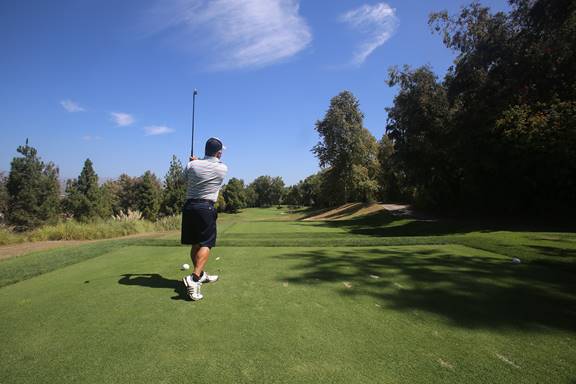 Casa Pacifica Centers for Children and Families is a crisis-care and residential treatment facility for foster or at-risk children in Ventura and Santa Barbara Counties. The agency is the largest non-profit provider of children’s mental health services in both counties and administers a number of community-based programs designed to strengthen families and keep children in their homes and communities. For more information about Casa Pacifica visit its website www.casapacifica.org or call the Development & Public Relations Department at (805) 445-7800.

The Camarillo Rotary is part of a global network of 1.2 million people who come together through Rotary International to make a positive, lasting change in communities at home and abroad. Their motto “Service Above Self,” is their guiding principle and the foundation of their values: service, fellowship, diversity, integrity, and leadership. The Camarillo Rotary’s annual projects include: “Viva La Comida” Mexican Dinner, “Rotary Creates Magic” Show, the Happ Rapp Memorial Track Meet, the “Biking, Brews & BBQ” Bike Ride and the Care for Kids Golf Classic. These events have raised over $1 million dollars over the past decade and are returned to local and international charitable causes through the Camarillo Rotary Foundation. The Foundation also awards thousands of dollars each year in scholarships to deserving local high school seniors.