Data from the Canadian province Alberta confirms figures from other nations contradicting the “pandemic of the unvaccinated” narrative, showing a spike in COVID-19 cases after vaccination.

Alberta’s data is particularly useful because the province reports COVID cases, hospitalizations and deaths by day after the first and second vaccine doses.

The most recent figures from the population of 4.4 million show infections, hospitalizations and deaths from COVID all soar in the days and weeks after people receive their first vaccine dose, reports former New York Times reporter Alex Berenson. 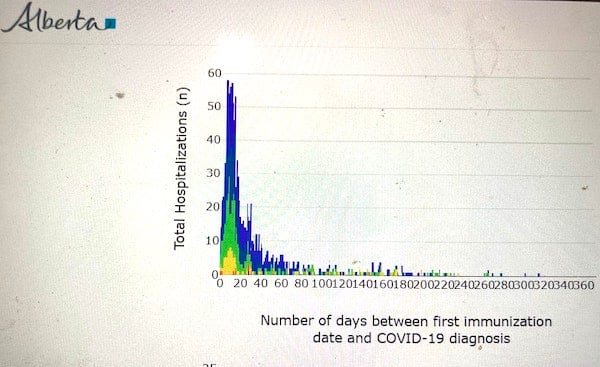 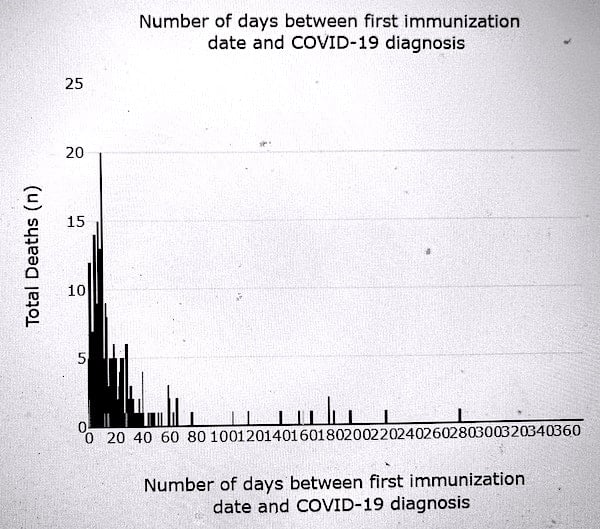 He points out that the figures support the national data from Israel and Britain, which saw COVID deaths hit all-time highs after launching mass vaccination campaigns.

Berenson observes that advocates of the COVID vaccines argue the deaths in the U.K. could be the result of a preexisting winter wave. (Although, he adds, other European countries such as France and Spain did not face similar large surges).

In any case, that explanation can’t be applied to Alberta, which began its vaccine campaign after the winter 2020-2021 COVID spike. Through mid-February 2021, only about 2% of Alberta residents had received their first dose.

“The most likely explanation for the spike was and remains that the first dose of the vaccines transiently suppresses the immune system, as Pfizer’s own clinical trial data reveal,” Berenson writes.

He pointed out that under “the counting rules used by American public health authorities and media outlets, all these deaths and infections are counted and reported as having occurred in unvaccinated people.”

Data from the U.K. from Aug. 16 to Dec. 5, 2021, showed people who had been vaccinated accounted for four of every five COVID-19 deaths, the Gateway Pundit reported.

Further, a U.K. “technical briefing on SARS-CoV-2 variants of concern” found that as of Dec. 29, the fully vaccinated make up 74% hospitalizations due to infection from the omicron variant that now dominates Western nations.