Harry Reid: Victory At Any Cost 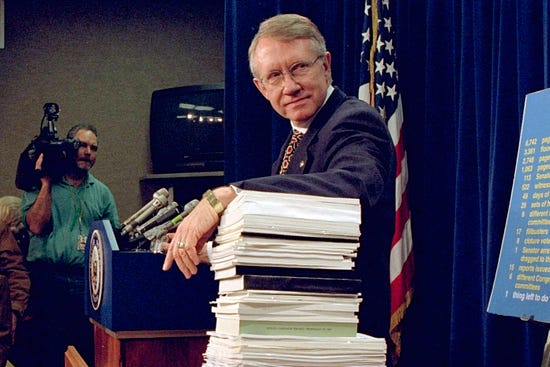 Reid, who served in the United States Senate for three decades, reaching the apogee of his legislative career during the Obama administration, died this week from pancreatic cancer. He was 82 years old.

Thus ends the life of one of the most ruthless and conniving U.S. lawmakers in recent history. In Congress, where Reid rose eventually to the rank of Senate majority leader, he lived by a simple rule: victory at any cost. His single-minded pursuit of power and influence, no matter the ethics of his actions or whom he wronged in the process, made him the amoral fighter Democrats loved and Republicans hated.

From accusing Republican lawmakers of poisoning voters to accusing 2012 Republican nominee Mitt Romney falsely of being a tax cheat to nuking the filibuster, Reid would do or say anything to advance his and his party’s immediate interests. There was no legislative sleight of hand too deceptive nor any slander too low so long as it harmed his enemies and won his party more control.

Reid even went so far as to use the floor of the Senate to attack private citizens who donated to conservative causes.

“These two brothers,” Reid said in 2014 of the multibillionaire libertarian-leaning Koch brothers, “are about as un-American as anyone that I can imagine. It’s too bad that they are trying to buy America.”

In May of the same year, he accused the Kochs of conspiring to create “climate change.”

Earlier, in 2012, Reid falsely accused Romney of tax evasion. The then-Republican presidential nominee, he claimed, “refused to release his tax returns, as we know.”

In 2016, during an interview with CNN, Reid essentially admitted to fabricating the tax cheat story.

He added, “I knew what [Romney] had done was not be transparent and forthright about his taxes and to this day he hasn’t released his tax returns.”

Romney did, in fact, release his tax returns during the 2012 presidential election.