The Ventura County Board of Supervisors held a special meeting in Moorpark, November 19 2019 at 6 PM.  The City’s Council Chamber was at overflow capacity.

County Counsel stated that even though the licensing is regulated by the state for growing hemp it is within the Board’s power to regulate its cultivation under the Board’s authority with land use. The Industrial Hemp Farming Act of 2018 Hemp Farming Act of 2018,  H.R.5485 – Hemp Farming Act of 2018. was passed by Congress.  This bill legalized industrial hemp that has a tetrahydrocannabinol (THC, the psychoactive component of marijuana) concentration of less than .03 percent.  It is not a hallucinogenic. The crop’s cycle is from three to four months and is planted in the late spring and harvested in late fall.  The planting in the County was delayed due to regulations being finalized.

Ed Williams, the Ventura County Agricultural Commissioner,  gave a Power Point presentation laying out the pros and cons of growing the crop.   Supervisor Kelly Long asked as to the length of time, and why, there is such a strong odor from hemp.  Williams claimed the smell lasts a month or two as it flowers.  The audience reacted negatively to that statement.  He did say that if a greenhouse enclosure were required that the air can be filtered.

Ventura County is listed in the top five counties for growing hemp. 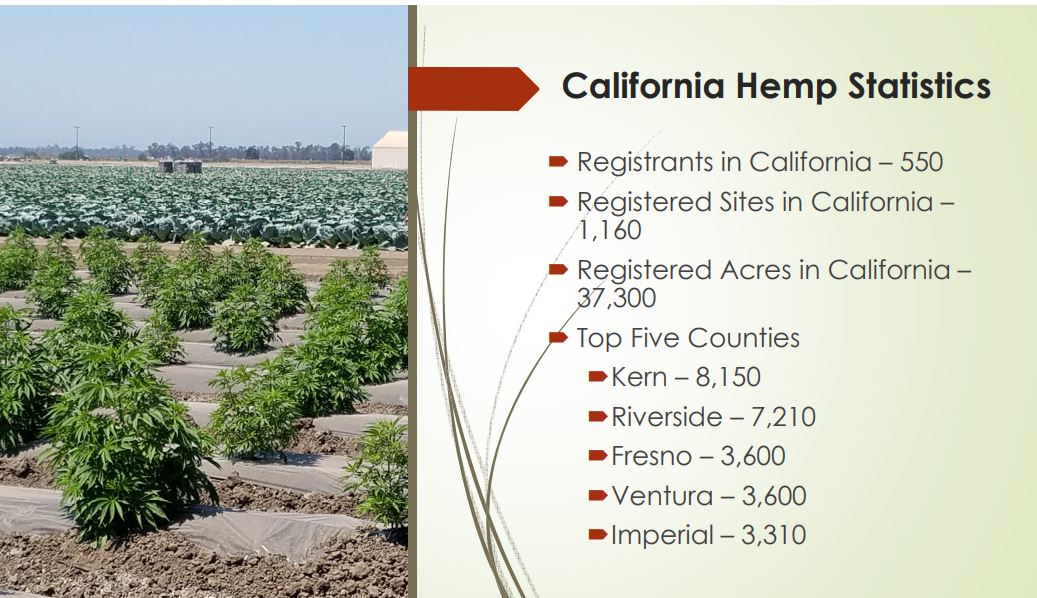 In his presentation benefits and drawbacks of Hemp were highlighted. 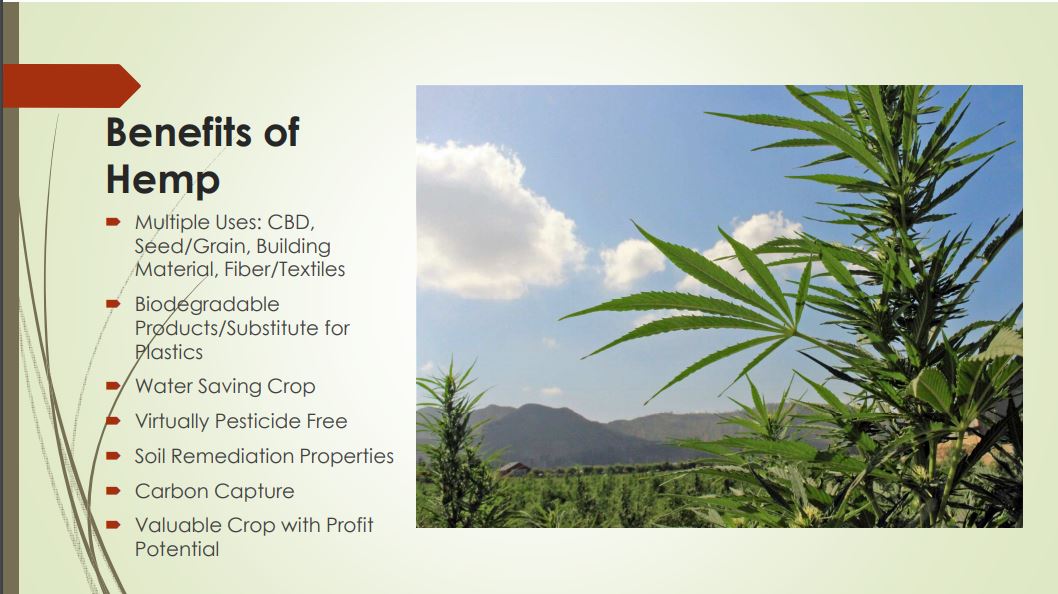 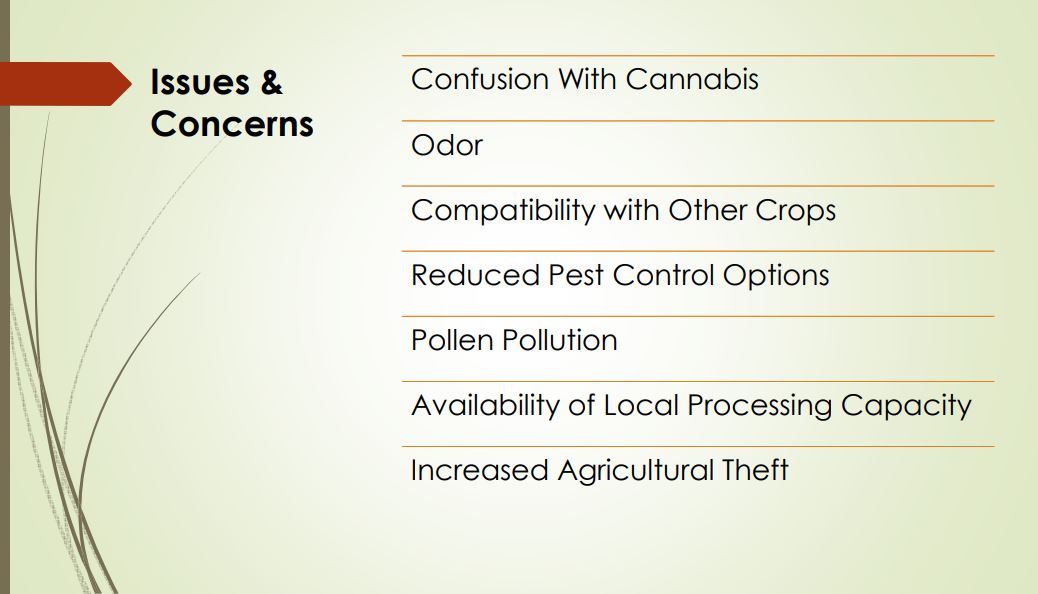 Gold Box Solutions Inc/Golden Eagle 4, LLC which has about 90 acres in hemp in the Tierra Rejada Valley has decidedly impacted its neighbors in the Moorpark area.  Of the concerns listed the public voiced that the odor has affected the community the most.  Claims of being made sick and that they can no longer enjoy the outside around their homes were also voiced. Most were opposed to growing the crop.  A farmer who cultivates four acres of hemp apologized to the people there but listed all the hardships of farming.  Several other farmers also spoke for supporting hemp in the County, extolling its health benefits.

Chief of Police Victor Fazio from Moorpark’s Ventura County Sheriff’s office asked for more security since growing the crop has been linked to local crimes.  This was also been noted in the Commissioner’s report.

City officials from Moorpark, Ojai and Camarillo also spoke, not only against the odor and blight but the increase of crime it has created.

Rob Roy, a lawyer representing agricultural interests, mentioned that limiting the growers could lead to a federal lawsuit. Lynn Jensen from CoLab requested that there be balance in any  regulation enacted.

After public commentary Long asked the Ag Commissioner if the crop were finished for the year.  It is possible that there could be a winter planting.  She also inquired if the Board regulates this crop if it would interfere with the “Right to Farm”.  County Consul advised the board that it would not interfere.

Supervisor Zaragozas wanted to move to accept the Commissioner’s report and that the Board direct staff to come up with additional studies and mitigation measures.  Maybe come out with ways to reduce the odor and keep growers away from impacted uses with setbacks

Supervisor Long suggested a six months moratorium be put on growing the crop.

Linda Parks proposed closing the registry to more growers and doing something to limit the existing growers.

Huber said that most of the complaints received were in his district. He wants at least a 2000 foot setback.

There were proposed mitigation measures in the Commissioner’s presentation. 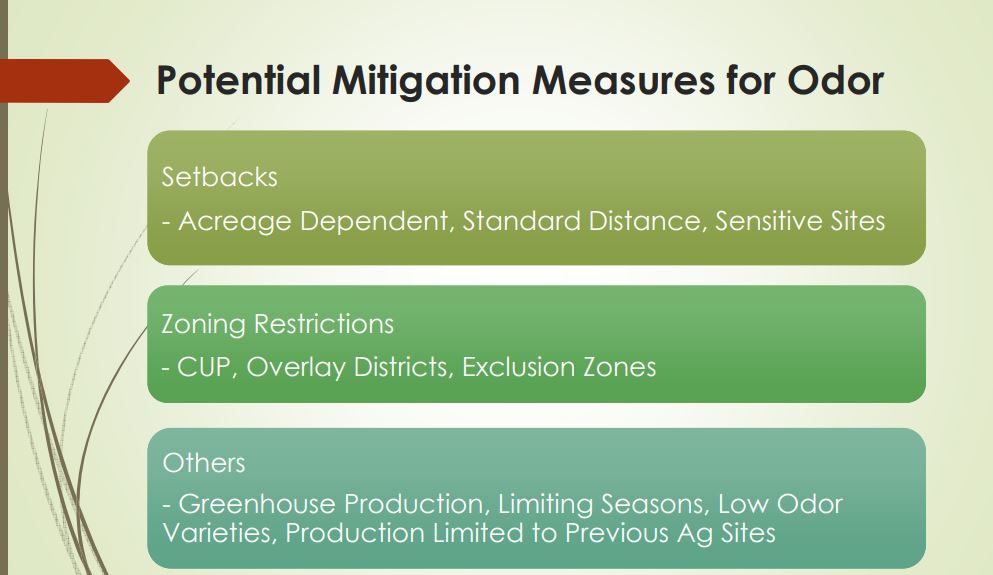 Long was concerned when staff could come back with answers as to stopping additional growers and how to mitigate the impacts by created by existing licensees.

The supervisors voted to accept the report and to have staff come back as soon as possible with a way to regulate the industry before the next growing season and to have the Agricultural Commissioner office as the lead agency.

Why are people more concerned about the rights of a few farmers and corporations over those of hundreds of residents? I have a right to enjoy my property without someone else’s pollution. The smell is trespassing.

Don’t you just love the cityites who move to the country for the open spaces and greenery and then complain like crazy because they suddenly realize that farming is not the way the ignorant visualize it. Farmer Brown doesn’t hand cultivate his fields. He is not Juan Valdez picking one coffee bean at a time off his trees. Farming in the U.S. is an industry and just like every industry there are noise, smells and traffic. What they really want is for Farmer Brown to plant non-allergenic grass so that there is a giant park for their kiddies to play on and for them to walk their dogs but, of course, they don’t want to buy the land from Farmer Brown. They want him to do it because he is a nice guy.

Apparently the county counsel told the board of sups that they can dictate what crops the farmer can grow. Nice. The last government that tried to dictate farming starved millions of their citizens to death.

The only crime I can recall being mentioned in the press was some 70 y.o. who apparently is partially brain dead from drug use who was busted “harvesting” hemp. That hardly seems like a crime wave to me. There is a difference between going out in the field and harvesting hemp and holding up a marijuana retail store. If we are so worried about crime, perhaps we should require marijuana stores to hire armed guards for all the hours they are open and store their wares in a safe room so that burglary is next to impossible.

Hemp used to be a major crop in the United States before all the disappointed prohibitionists decided they needed something else to try to force people to not use inasmuch as alcohol prohibition failed so miserably.

Didn’t someone define insanity as doing the same thing over and over again and expecting a different result?

Unlike several recent U.S. presidents, I have never used any illegal substance in my life, yet I recognized decades ago that the War on Drugs was about as futile as the War in Vietnam. It’s time to declare victory and abolish the loser drug laws. Won’t happen though, too many people’s jobs depend on more and more substances being illegal. It’s like the military/industrial complex that Eisenhower warned us about, only a bigger infringement on our personal liberty.

“If we are so worried about crime, perhaps we should require marijuana stores to hire armed guards for all the hours they are open and store their wares in a safe room so that burglary is next to impossible. ”