Republican Reps. Ken Buck and Lance Gooden announced Friday the launch of the Freedom from Big Tech Caucus, a group of House Republicans working towards reining in major tech companies.

The caucus will focus on addressing anticompetitive and monopolistic practices by major tech companies, political censorship, and Big Tech’s relationship with China, Buck and Gooden announced in a statement. The caucus will also include Reps. Madison Cawthorn, Burgess Owens, and Paul Gosar, according to the announcement.

“Big Tech has abused its market power for decades, and Congress must act to hold these companies accountable and preserve the free market, promote competition and innovation, protect the freedom of speech, and foster a thriving digital economy,” Buck said in the statement.

The lawmakers argued that major tech companies’ market power allowed them to stifle competition and censor speech, negatively affecting consumers and benefiting China. The caucus will also work to address violations of privacy and data rights, and harmful content exposed to children online, according to the statement.

“Regulators have been asleep at the wheel while Big Tech has fleeced the American public of our personal data and our freedom of speech with their monopolistic behavior,” Gooden said. 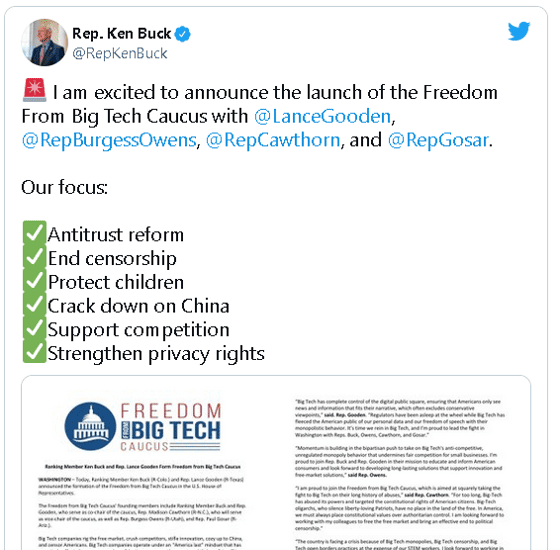 Buck was one of the members of the House Judiciary Committee who proposed six bipartisan-supported bills in June aimed at addressing perceived market abuses from major tech companies. He has also been critical of Big Tech’s relationship with China, calling on Apple to separate itself from the Chinese state’s practice of forced labor.

Major tech companies have faced a number of antitrust legal challenges this past year, with two complaints against Facebook dismissed in June, and Google the defendant in four antitrust lawsuits. A complaint filed by 36 state attorneys general last week challenged Google over its alleged monopoly in the Android app market.

The companies also face pressure from enforcement agencies, with vocal Big Tech critic Lina Khan appointed to head the Federal Trade Commission in June. Both Facebook and Amazon petitioned for Khan’s recusal over her antitrust positions.

Ken Buck is an American Patriot!!!