Many residents seeking escape from influence of Portland

A joint House and Senate committee of the Idaho legislature listened to an appeal by members of a group that want Idaho to absorb most of Oregon.

The request is a longshot — requiring approval of the legislatures of both states as well as Congress — but the invitation from Idaho lawmakers may have been the biggest win so far for the group, Move Oregon’s Border for a Greater Idaho, the Idaho Press reported.

“Why not have the conversation? It’s an intriguing idea. There absolutely are benefits to the idea,” she said. “It’s not necessarily something that would happen right away.”

But she noted movements of citizens in Eastern Washington and Northern California that also would like to become part of a “Greater Idaho.”

The founder of Move Oregon’s Border for a Greater Idaho, Mike McCarter, said in his presentation that the “boundary between Oregon and Idaho is outdated because it doesn’t match the cultural boundary between urban communities who like Portland’s leadership and rural communities that are traditional, family-oriented, self-reliant.”

He pointed out the benefits for Idahoans as well, including more state tax money, access to the International Port of Coos Bay, new industries and the chance to “alleviate future overcrowding” in Idaho.

It would also put the border of Oregon and its more liberal laws further from the population of Boise.

Should Idaho absorb most of Oregon?

Simmons acknowledged the plan is a longshot, requiring “an appeal to heaven.”

But it has some support among rural Oregonians. Four counties voted on the issue in November, and two voted in favor.

McCarter said he hopes the ballot initiative will be taken up by at least five more counties for the upcoming May 2021 election. 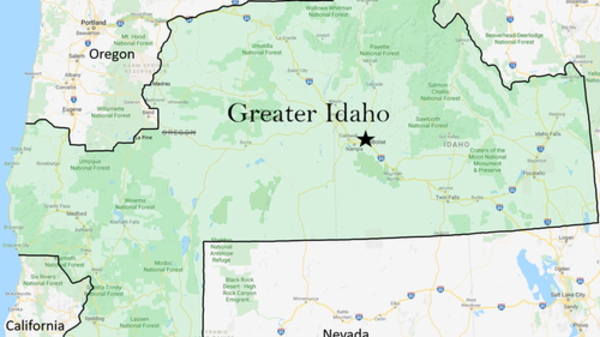 This story was originally published by the WND News Center