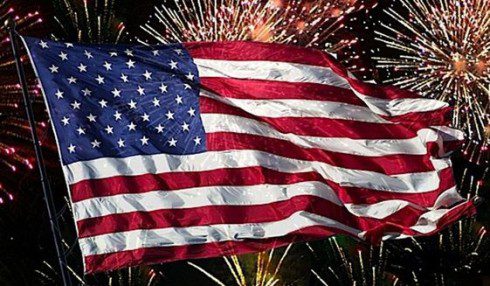 What makes our Declaration of Independence unique:

The famous preamble to the Declaration of Independence which reads: “We hold these truths to be self-evident, that all men are created equal, that they are endowed by their Creator with certain unalienable Rights, that among these are Life, Liberty and the pursuit of Happiness.” 2

Starting in 1776 the 4th of July has been celebrated as the birth of American independence, with festivities ranging from fireworks, parades and concerts to more casual family gatherings and barbecues.

How did Congress get it done?

It all started on June 7, 1776, when the Continental Congress met at the Pennsylvania State House (Independence Hall) in Philadelphia, and the Virginia delegate Richard Henry Lee introduced a motion calling for the colonies’ independence:  “Resolved: That these United Colonies are, and of right ought to be, free and independent States, that they are absolved from all allegiance to the British Crown, and that all political connection between them and the State of Great Britain is, and ought to be, totally dissolved.” 1

Congress postponed the vote on Lee’s resolution, because of a very heated debate and so appointed a five-man committee—Thomas Jefferson of Virginia, John Adams of Massachusetts, Roger Sherman of Connecticut, Benjamin Franklin of Pennsylvania and Robert R. Livingston of New York to draft a formal statement justifying the break with Great Britain. 1

On July 2nd, 1776, the Continental Congress voted in favor of Lee’s resolution for independence in an almost unanimous vote (the New York delegation abstained, but later voted affirmatively).  “John Hancock, president of the Continental Congress, signed the Declaration of Independence. It is said that he signed his name “with a great flourish” so England’s “King George can read that without spectacles!” “ 1   “On that day, John Adams wrote to his wife Abigail that July 2 “will be celebrated, by succeeding Generations, as the great anniversary Festival” and that the celebration should include “Pomp and Parade…Games, Sports, Guns, Bells, Bonfires and Illuminations from one End of this Continent to the other.”” 2

But “discussions continued on Jefferson’s Declaration of Independence which resulted in minor changes, the spirit of the document was unchanged.  Revisions to the Declaration of Independence continued through July 3 and into the late afternoon of July 4, when it was officially adopted by the Continental Congress.  Though the vote for actual independence took place on July 2nd, from then on the 4th became the day that was celebrated as the birth of American independence.”  2

So officially Congress declared its freedom from Great Britain on July 2, 1776, when it approved the resolution in a unanimous vote but the Declaration of Independence was not signed till the 4th of July.

“Many members of the Continental Congress started to sign an engrossed version of the Declaration on August 2, 1776, in Philadelphia. John Hancock’s famous signature was in the middle, because of his status as President of the Congress. The other delegates signed by state delegation, starting in the upper right column, and then proceeding in five columns, arranged from the northernmost state (New Hampshire) to the southernmost (Georgia).” 3

“Historian Herbert Friedenwald explained in his 1904 study of the Second Continental Congress that the signers on August 2 weren’t necessarily the same delegates at the Congress in early July when the Declaration was proposed and approved.

“Attempting now to determine the names of some of those who were present on the day officially appointed for signing the engrossed document (August 2), we reach the conclusion that a far greater number than has generally been supposed were not in Philadelphia on that day either,” said Friedenwald, who determined discrepancies between the delegates perceived to sign the document on July 4 and the actual delegates who started signing the Declaration on August 2.” 3

“Friedenwald said there were 49 delegates in Philadelphia on July 4, 1776, but only 45 would have been able to sign the document on that day. Seven delegates were absent. New York’s eight-person delegation didn’t vote at the time, while it awaited instructions from home, so it could never have signed a document on July 4, he said.

“However, the signers’ names weren’t released publicly until early 1777, when Congress allowed the printing of an official copy with the names attached. On January 18, 1777 printer Mary Katherine Goddard’s version printed in Baltimore indicated the delegates “desired to have the same put on record,” and there was a signature from John Hancock authenticating the printing. “3

How did the celebration start and change over the centuries?

“During the summer of 1776 some colonists celebrated the birth of independence by holding mock funerals for King George III as a way of symbolizing the end of the monarchy’s hold on America and the triumph of liberty.” 1

“Philadelphia held the first annual commemoration of independence on July 4, 1777, while Congress was still occupied with the ongoing war. The tradition of setting off fireworks on the 4 of July began in Philadelphia on July 4, 1777, during the first organized celebration of Independence Day. Ship’s cannon fired a 13-gun salute in honor of the 13 colonies. The Pennsylvania Evening Post reported: “at night there was a grand exhibition of fireworks (which began and concluded with thirteen rockets) on the Commons, and the city was beautifully illuminated.” That same night, the Sons of Liberty set off fireworks over Boston Common.”  2

“John Adams described the scene in a letter he wrote the next day, July 5, 1777, to his 11-year-old daughter, Abigail.  “My dear Daughter, Yesterday, being the anniversary of American Independence, was celebrated here with a festivity and ceremony becoming the occasion,” he wrote:   Like most big street parties, there was also quite a bit of drinking going on, at least if William Williams’ complaints are to be believed. The Founding Father from Connecticut disapproved of the shenanigans and later harrumphed about the “great Expenditure of Liquor” that day, among other transgressions, according to Edmund Cody Burnett in “Letters of members of the Continental Congress.” 1

“George Washington issued double rations of rum to all his soldiers to mark the anniversary of independence in 1778, and in 1781, several months before the key American victory at the Battle of Yorktown, Massachusetts became the first state to make July 4th an official state holiday. “ 2

“As time went on, the celebrations included concerts, bonfires, parades and the firing of cannons and muskets usually accompanied the first public readings of the Declaration of Independence, beginning immediately after its adoption. “ 2

“After the Revolutionary War, Americans continued to commemorate Independence Day every year, in celebrations that allowed the new nation’s emerging political leaders to address citizens and create a feeling of unity. By the last decade of the 18th century, the two major political parties—the Federalist Party and Democratic-Republicans—that had arisen began holding separate Fourth of July celebrations in many large cities.” 2

Fourth of July observances “only became commonplace after the War of 1812,” according to the Library of Congress. “By the 1870s, the Fourth of July was the most important secular holiday on the calendar.” 1

“The importance of the holiday lies not only in celebrating the birth of a new, free nation, but in recognizing the significance of the Declaration of Independence, which was — in the words of Abraham Lincoln — “a rebuke and a stumbling-block to tyranny and oppression.” “ 1

S, Bond is a Citizens Journal columnist and photographer. She lives with her family in Oxnard.