Insanity Alert: DC Faces seeks to remove, relocate, contextualize national monuments as the “cancel culture” wants to rewrite U.S. history in light of the District of Columbia 1977 Human Rights Act and not by the standards in place during the time of our founding fathers.

The leftist campaign to destroy American monuments in our Nation’s Capital was presented in a 24-page executive summary issued by D.C. Mayor Muriel Bowser. The District of Columbia Facilities and Commemorative Expressions Working Group report released Sept. 1 would change U.S. historical monuments to “reflect oppression of African Americans, and/or other communities of color” which has contributed to the “nation’s history of systemic racism and other biases.”

This report seeks to make every American ashamed of their nation and have everyone accept that the core nature of the United States is “racism” which was instilled upon us by our founders.

“A vast majority of the people we heard from agreed that the District should take action on public namesakes that are inconsistent with our D.C. values,” said Executive Director Richard Reyes-Gavilan.

My response: The working group report was written by a group of 33 anti-Americans based on a Virtual Town Hall meeting and a survey of 2,300 District residents who don’t reflect the values of our country. The D.C. monuments are not just for the residents of D.C. but for all our nation’s citizens.

“DC residents consider being the namesake of public assets a high honor that should be reserved for esteemed persons with legacies that make DC proud” said Reyes-Gavilan.

The report identified 3,050 total assets (1,330 named properties and 153 persons of concern). Who are some of the offenders that bothered those who authored this report?

The factors that disqualified these individuals included:

“No matter your race, your faith, your sexual orientation, your gender identity, your background–you should be able to live work and play in Washington DC without fear of violence or discrimination,” wrote Mayor Bowser in the report.

The DC Faces report (which includes recommendations for public schools; residential buildings and campuses; parks, fields and playgrounds; government buildings; along with statues and memorials) acknowledges that eight offensive statues and memorials are on federal property and issued a recommendation that “the Federal government remove, relocate, or contextualize” these monuments.

Comments made during a Sept. 2 American Center for Law and Justice podcast:

Meanwhile, adoption of the DC Faces recommendation for removal of federal monuments would take approval from the National Park Service and Interior Secretary David Bernhardt who tweeted: “Not on my watch” as well as from the U.S. Senate Committee on Energy and Natural Resources chaired by Senator Lisa Murkowski, R-Alaska and Senator Joe Manchin, D-West Virginia.

(Editor’s Note: To view the Executive Summary of DC Faces go to this link: 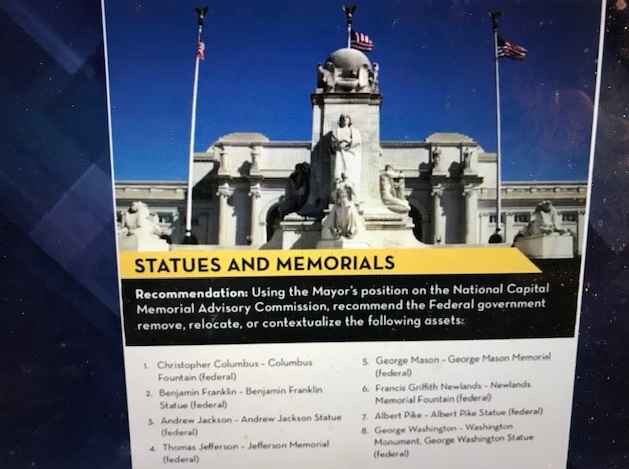