Over the past month, Israel, the world’s most heavily vaccinated country (with leading mRNA jabs, no less) has seen the number of positive COVID tests has risen by more than 30x as the number of active infections in the country has surpassed 10K. 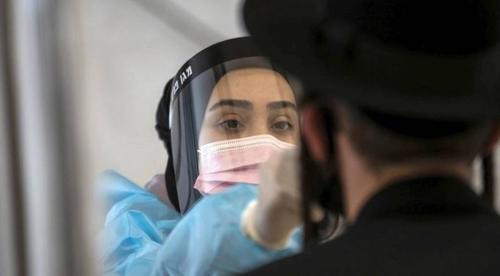 Alex Berenson, a former NYT journalist who has often reported on scientific findings that don’t support the official narrative on masks and vaccines, shared the findings in a tweet, and speculated that the true efficacy in offering protection against the Delta variant might be even lower – perhaps as low as 30%.

Even Bloomberg acknowledged that the Israeli data “could be skewed because of different ways of testing vaccinated groups of people versus those who hadn’t been inoculated, according to the report.

“The heavily skewed exposure patterns in the recent outbreak in Israel, which are limited to specific population sectors and localities,” means the analysis may not be able to take all factors into account, said Ran Balicer, chairman of Israel’s national expert advisory team on Covid-19 response. “We are trying to complement this research approach with additional ones, taking additional personal characteristics into account. But this takes time and larger case numbers.”

But Dr. Anthony Fauci, the FDA and the CDC have all said that there’s no evidence yet that a third “booster” shot would be necessary. Israel has already ordered a round of booster shots that it plans to start distributing to the most vulnerable patients Aug. 1.

But never mind all that: As President Biden said earlier this week, “if you are vaccinated, you are safe.” Unless you’re not.

Why get the jab again???
Like wearing the face diaper? To virtue signal???

Not with Modified RNA mechanism of action… No thanks…