RAINSVILLE, ALABAMA—”I have one goal in this election and it is to destroy Dominion Voting,” said Democrat progressive litigation attorney Dana Jill Simpson in an exclusive interview posted Nov. 23 by the National File. “This machinery not only stole the election from Trump but also Bernie. This bunch in Serbia and Canada of Dominion computer program hackers works with Hillary (Clinton) and with the UN (United Nations) on overthrowing foreign countries with the Delian Project.

“Anyone who stands up for this machinery is nuts and they are misleading the public about where the equipment is made. I have been to the Denver office and all it does is sell foreign programed machines to US voters like they were made in Denver when they are not.

“The New York Times and Washington Post are misleading the public with lies. I double dare those papers and any papers in the world or other media to visit the Denver office and then say machines and programs are made there. It is a bald face lie.

“The machines are made by Flex(tronics) in China (working with Huaewie) for the most part and the programming is done in Serbia and Canada and the international corporation is Barbados. They have direct ties to the Clinton Foundation’s Delian Project,” said Dana Jill Simpson, known for her 2007 battle against Karl Rove for his instigation of federal prosecution against 51st Alabama Governor Donald Siegelman (1999-2003) which she won and resulted in Rove losing his White House post.

“Jim (Dana’s husband) and I as an election team working for Harvard lawyer Cliff Arnebeck (national co-chair and attorney for Alliance for Democracy—a progressive populist movement) located all the Department of Justice documents to prove how Dominion voting owes it 30 percent market share to an Obama-Biden DOJ Antitrust division sale done by Eric Holder.

“No party running for office should have any ties to a company; but Biden while in office with Obama; let Eric Holder handle this sale to their pet company Dominion. That my friends is as corrupt as it gets.

“I got a tip that Biden took a trip on May 20, 2009 and that is when he cut a deal to help Serbian hackers in Belgrade where he was visiting to get control of info about ES&S (Election Services) machines so he and Obama would have a better chance in 2012.

“Well, not only did they get a better chance but Biden had Holder force ES&S in a divestiture suit in the Antitrust department in the US DOJ to give over half of ES&S to Serbian programmers for Dominion Voting Systems. Such a disgusting situation.”

Dana Jill Simpson told Tom Pappert, editor-in-chief of the National File, that Dominion Voting Systems office in Toronto, Canada shares an office floor with the George Soros-funded left-wing Tides Foundation (Tides Canada is now MakeWay). Tides Foundation in America is based in San Francisco. The Tides Foundation has reportedly received more than $20 million in donations from George Soros groups for a “radical left-wing makeover of Western civilization and the world.”

Access Wire reported that “Dominion entered into a 2009 contract with Smartmatic and provided Smartmatic with the optical scanners that were used in the 2010 Philippine election—the biggest automated election run by a private company.”

Smartmatic is chaired by Mark Malloch-Brown who has worked with George Soros on various projects including as vice chair of the Open Society Institute and also Soros Fund Management.

One American News Network (Channel Rion) reported that Dominion flipped votes from Trump to Biden or lost Trump votes in massive margins in states including Pennsylvania and Georgia where the flipped/lost vote total is higher than Biden’s supposed “leads.”

Bloomberg reported that Dominion “hired the lobbying firm of Brownstein, Farer, Hyatt, and Schreck.  One of the lobbyists in their account is Nadeam Elshami, former chief of staff for House Speaker Nancy Pelosi.

Democrat Senators Elizabeth Warren (MA), Amy Klobuchar (MN) and Ron Wyden (OR) press release dated Dec. 10 states: “The three vendors: Election Systems and Software, Dominion Voting Systems, and Hart InterCivic—collectively distribute voting machines and software that facilitate voting for over 90 percent of all eligible voters in the United States. Private equity firms reportedly own or control each of these vendors which have long skimped on security leaving voting systems across the country prone to security problems.”

Meanwhile, National File ran a Nov. 21 post by Roger Stone, a former advisor to President Donald J. Trump in which he wrote: “Bill Gates, Microsoft designed election software (called Election Guard) used by Dominion. In other words, 100 percent of the voting machines and voting systems in this country are using the same software that Dominion hs been using to switch votes.” 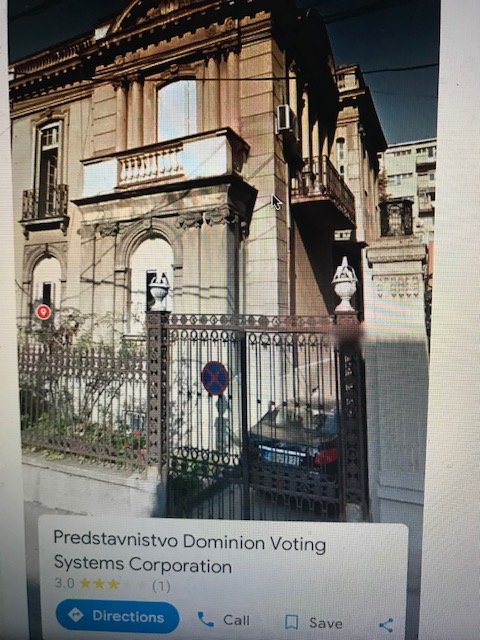 Unbelievable! That is to say totally lacking any sort of credibility or objective evaluation of facts.