L. Neil Smith’s The Libertarian Enterprise | The Sandwich From Yesteryear

Watch your toes and pardon the rockers on my hobby-horse. I have had an idea that won’t leave me alone until I write about it.

The aurocs, you probably know, was a kind of wild bovine critter that lived and flourished in fairly recent prehistoric times. It ranged all over the Old World, from Japan and what became Sahara country, to Europe, where it first showed up about 270,000 years ago. (Homo sapiens arrived  there about 100,000 years ago, when Adam and Eve got expelled from the Garden of Africa.

The aurocs is the number one game animal depicted lovingly in cavemens’ wet dreams, as painted by torchlight on the walls of certain caves, notably in France. I don’t know why French cavemen produced the most beautiful paintings in the world, but the genetic thread seems to have run true from 40,000 years ago, straight to Henri Toulouse-Lautrec, Paul Gauguin, and Claude Monet. Our ancestors hunted woolly mammoths, too — it must have seemed to them as massive an undertaking as the Space Progran — but I don’t think I’ve ever seen one depicted on a cave wall.

Aurocs were pretty sizable, too, standing six feet tall at the shoulder, and running about a ton and a half on the hoof — without modern breeding and feeding. They would have filled out our caveman’s larder splendidly — until they spoiled from lack of refrigeration — and provided lots of handy hides and bones for everyday cavehold use. I’m sure I’ve seen pictures of an aurochs-bone flute, somewhere. Maybe they weren’t quite as big as H. Beam Piper’s super-cows, in _A Planet For Texans_ (one of my favorite books) but I can still visualize a great big aurochs carcass, slowly turning on a spit over of bed of lovingly-maintained coals, and Mr. Caveman slicing off a big chunk to put into his sandwich — once bread and barbecue sauce got themselves invented.

I was born and raised out here in cattle country and I don’t take limp-wristed socialist whimpering about cow farts and resource sustainability seriously at all. I fully understand that Vegans and vegetarians are their own punishment, and that the elites of the planet have never wanted us deplorables to eat meat: it builds strong nervous systems twelve different ways — and makes us uppity peasants too smart for the aristocrats’ good. Just ask George III.

It also occurred to me just the other day that, almost certainly, none of these self-appointed “experts” — Alexandria Ocasio-Cortez, for example — have ever touched a cow, or even seen one closer than from the Interstate, traveling as fast as they possibly can through country they would far rather be flying over.

My father was was an Air Force officer and a war hero. My mother had been a secretary in southern California, but somehow they managed to provide me and my younger brother with more than a passing acquaintance with tasty beeves and their environs. I have patted Ol’ Bossy on the ass and accidentally stepped in a cow patty. I am familiar with the healthy odor of cattle (horses, too) and don’t find it at all offensive (okay, sheep are something else). My heroes, as the song goes, have always been cowboys.

Julius Caesar described aurochs in Volume III of his _Gallic Wars_ — another French connection, coinzidenza_? The last one died, regrettably, in 1627, in a forest in Poland, but I recently learned to my delight that aurochs DNA abounds in the world’s laboratories (it’s found in their bones), and the entire genome has been mapped. It wouldn’t be much of a feat to plant some of it in the egg cell of a closely related descendant species — say an Indian cow —  and bring it to term. It would certainly be less ambitious than trying to resurrect woolly mammoths (a favorite scientific undertaking of mine) and a hell of a lot more practical — and profitable.

Imagine, if you can, the Wyoming prairie (my wife is from Wyoming, the original Marlboro Girl, and as inveterate a Westerner as I am) or the flat lands of northern Texas, blackened from horizon to horizon, not with American bison (although I like them, too — yummy!) but with archaic European aurochs.  Fifteen hundred pounds of politically incorrect red meet, stamping around, munching the prairie grass, paying court to the lady aurochs and doing whatever else aurocs did when Fred Flintstone and Ringo Starr were wandering the countryside with flint-tipped spears in their hands and growling stomachs under their aurochs-hide Speedos.

So that’s my idea, friends and readers. Resurrect the first big game animal our distant ancestors likely ever hunted and ate. It should prove to be a highly profitable enterprise. We may even discover that we have a genetic affinity for aurocs meat. Perhaps we’ll be less likely to gather deadly fat in our arteries, chowing down on the creature we evolved to consume.

Pass the barbecue sauce, please, and in any case, Bring Back The Aurochs! 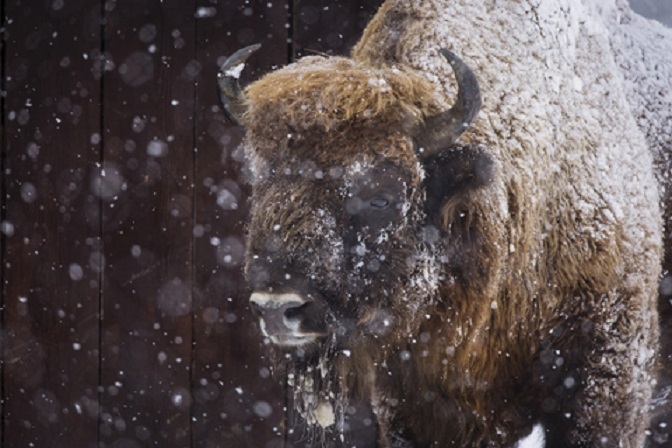