Liliana Arriaga “La Chupitos” is considered to be the Latin version of Carol Burnett. La Chupitos, the “clever drunkie”, who everyone loves and has respect for, has become the most beloved comedian for Latinos in the United States. She has broken through many obstacles and is now very popular and acclaimed in Central and South America, Puerto Rico, The Caribbean and Spain. She is also frequently called on for interviews and TV shows for Univision, Telemundo, TV Azteca and other North American TV networks. 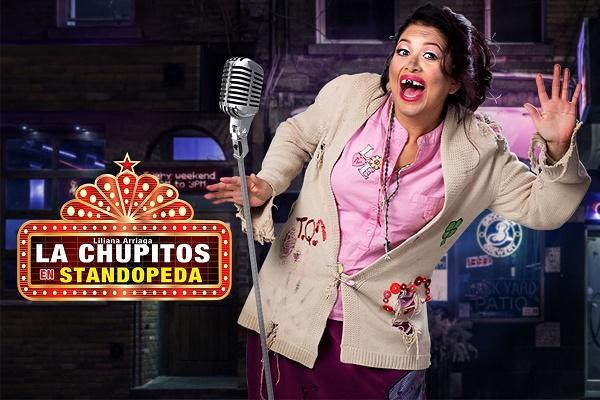 Her solid career has proved popular as Liliana has taken her humor and talent to every platform. For cinema, two of her movies filmed in the United States are now being shown in festivals around the world. Her path in television on La Casa De La Risa, Fabrica De Risas, Mujeres Engañadas, is unforgettable. Liliana’s leading roles in A Que No Puedes, Chuperamigos, Estudio 2, Lagrimita y Costel, confirmed her popularity. Not to mention 10 seasons of Tengo Talento, Mucho Talento where she accomplished putting a smile on millions of tv spectators.  Her national radio show Ya Llego Chupitos was recently released by the national network ‘La Que Buena’.

THE STORY BEHIND THE SUCCESS… In the year of 1997, she initiated her career inside the Spanish speaking comedy in the international show “Siempre en Domingo”, where the character of La Chupitos was born and blessed by tv host Don Raul Velasco.  Liliana Arriaga, the actress that brings life to this original and funny character, said that as a kid she made families and friends laugh with her improvisations thanks to her noticeable outgoing personality.

Liliana studied Business Administration, but her heart led her to focus on acting, which is what has given her greatest satisfactions on many stages. Many audiences have given her standing ovations for her theatrical work of giving life to her beloved character.  It has been over 17 years of career touring with her show all over Mexico, the United States and some Latin American countries. Arriaga writes her own scripts, produces and directs the successful shows that has praised “La Chupitos” everywhere.

Her husband and three kids are the motivation to continue working hard at such an intense pace. Liliana has appeared in many successful shows for Univision and Televisa, attracting thousands of people that enjoy her particular way of making people laugh.  Watch: https://www.youtube.com/watch?v=HO_6H_kk25E&feature=emb_logo