“I recognize the importance of the decision,” said Judge Beckloff in an interview with CBS.  Meanwhile, Grace Community Pastor John MacArthur said to Fox News on Thursday: “We’re going to have church on Sunday. One one-hundredth of one percent of Californians have COVID. No one in the entire state is allowed to go inside the church. We are under authority of Jesus Christ. He says ‘have church’ and we are going to have church.”

“They are targeting religious gatherings of large groups,” said Jenna Ellis, Thomas More Society Special Counsel to Pastor John MacArthur. “This is discriminatory enforcement. There are constitutional arguments. When government has this type of broad unlimited indefinite power, our rights become privileges as the county allows. We have constitutional protections.”

Judge Beckloff refused to allow Gov. Gavin Newsom file a friend-of-the-court brief in support of the county’s stand. LA County sued Grace Community Church on Aug. 14 after it began holding indoor services on Sundays. Meanwhile, the church filed a suit against the county in response and the case is awaiting trial in Burbank Superior Court.

Pastor John MacArthur spoke on Fox News of a sexual and homosexual revolution in which we are “rapidly going downhill in warp speed. This is the degeneration of a nation with no conscience.”

“That is why we need the church,” said attorney Jenna Ellis. 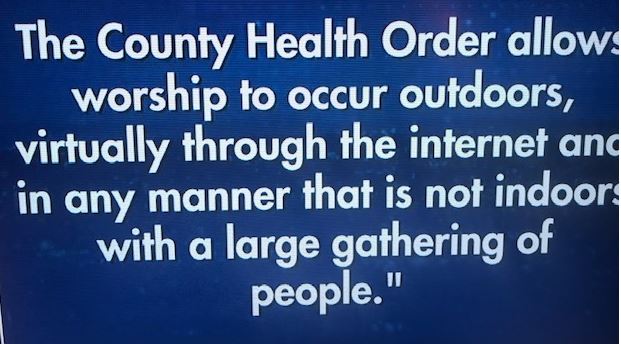 This is what happens when politicians think they’re scientific experts.

CONSTITUTIONAL RIGHTS…..as long as you can keep them.

Thank you for following this story as it unfolds. Valuable work.

If Govt is able to silence the Church, if that is it’s desire, to bow to the architects of this globally implemented operation, then the People have a choice and potentially a responsibility, to remove their Governance, as it only exists by consent of the governed.

I do not consent to this, and support this Pastor’s decision.

The numbers of covid-19 infections do not
support Los Angeles county claim.
I thought the honorable judge might do his homework,
but obviously he did not.