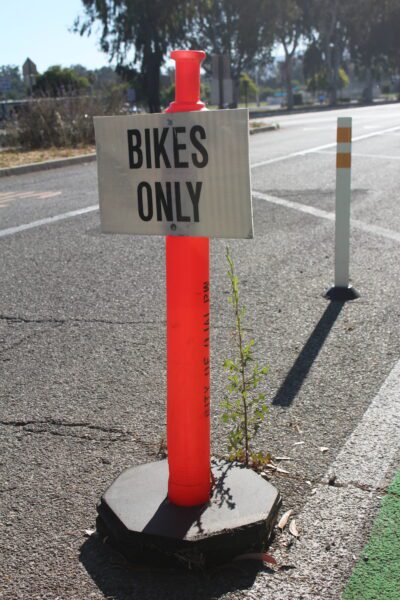 Dear all, within days of my 6/10 email below, the City of Ojai fixed the upside-down ‘Bike Only’ sign on Maricopa Hwy (please see right-side up sign attached above); like “nibbling around the edges”, the City Council failed to address the real issue (lane reduction in a fire-prone region), instead choosing to do little things on the surface that don’t really make much difference.  Alta Planning + Design (engineers for Lane Reduction on Maricopa Hwy) please note, does your liability policy cover professional negligence (eliminating vehicle lanes in a region with a history of wildfire)?
The actions by the 3-2 majority on the Ojai City Council remind us of San Francisco’s recent recall of their district attorney.  Residents of SF voted Chesa Boudin out of office because “he didn’t seem to care that he was making the citizens of our city miserable in service of an ideology that made sense everywhere but in reality”.  Rather than a “vanity project”, Ojai residents (like those in SF) want their elected officials to create and maintain a livable city (which includes resurfacing badly worn city streets and repairing the Ojai Bike Trail).
Please see recent articles and links below about climate change and wildfire evacuation in California’s small rural towns:
OJAI ROAD DIET BRINGS EVACUATION DANGERS:
https://www.citizensjournal.us/ojai-road-diet-brings-evacuation-dangers/?utm_source=rss&utm_medium=rss&utm_campaign=ojai-road-diet-brings-evacuation-dangers&utm_source=Newsletter&utm_campaign=acd50f2ccd-RSS+Weekly+Email&utm_medium=email&utm_term=0_baf63970c8-acd50f2ccd-421139350
CALIFORNIA TOWNS SCRAMBLE TO PREVENT NEXT WILDFIRE CATASTROPHE:
https://capitalandmain.com/ california-towns-scramble-to- prevent-next-wildfire- catastrophe
“Whether or not individuals or communities in the greatest risk of fire are doing enough to prevent catastrophe, one thing is clear: Almost all of them see the risk they face. The Camp Fire was the big wake-up call for people in fire zones.  And there’s a growing awareness that there’s no ‘fire season’ anymore.
Lastly, please visit the link below for an on-line video titled “California Route 33 Scenic Drive” to see the beautiful scenery along our Hwy 33 until you arrive at Ojai’s 5-STOP at 1:33:43 (1 hour, 33 minutes, 43 seconds) where the Demonstration Project begins:

Up until I reached my late 70s I rode a bicycle daily. While it would have been very nice to be able to occupy a lane of travel all to myself, I realized that this was SoCal, the land of the automobile; the land built to accommodate travel by automobile.

I am well aware of the rule and regulations in the vehicle code regarding bicycling but unfortunately they are passed in Sacramento by legislators who are responding to political pressure from the bicycle coalition and from greenies who would like to see everyone on bicycles to save the environment.

Real life is that there are a lot more motor vehicles on the roads than there are bicyclists. Should 10, 20, 30 motorists be delayed in their travels for the “entitlements” of a single bicyclist?

There are some roads that bicyclists should stay off due to road construction and traffic volumes. It is just a matter of the bicyclist’s own safety. Highway 33 is one of those roads. During the week heavy trucks use it as a shortcut from Bakersfield. During the weekends, it is a high-speed, high-volume highway with few if any shoulders.

Closing one lane for bicyclists doesn’t do anything about addressing the traffic already on the roadway. It just frustrates motorists and adds to more congestion. It is short sighted and doesn’t take into consideration the realities of life.