Lecture and Book Signing with Craig Shirley at the Reagan Library

Please join us for a lecture and book signing with presidential historian and best- selling author Craig Shirley on his latest book, Mary Ball Washington: The Untold Story of George Washington’s Mother (Harper Collins: December 3, 2019) on February 13 at 6 p.m. at 40 Presdential Drive in Simi Valley. This event is free to attend; however, books must be purchased in the Reagan Library Museum Store to receive signature. Books may be pre-purchased during the reservation process. 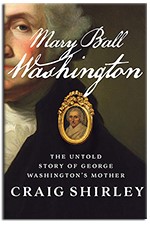 Craig Shirley is president and CEO of Shirley McVicker  Public Affairs, which he founded in 1984. He is also the bestselling author of Reagan’s Revolution: The Untold Story   of the Campaign That Started It All, which detailed Ronald Reagan’s pivotal 1976 presidential campaign, Rendezvous with Destiny: Ronald Reagan and the Campaign that Changed America, which details Ronald Reagan’s 1980 campaign, Last Act: The Final Years and Emerging Legacy of Ronald Reagan, about Ronald Reagan’s post presidency and Reagan Rising: The Decisive Years, 1976-1980. Shirley is also the author of the New York Times bestseller, December, 1941, 31 Days That Changed America and Saved the World and the definitive biography of Newt Gingrich entitled Citizen Newt. The London Telegraph hailed Shirley as “the best of the Reagan biographers.” Shirley is the Visiting Reagan Scholar at Eureka College and has taught a graduate level course on Reagan at the University of Virginia.