In these darkest inflationary days, we should be grateful that Florida Governor Ron DeSantis gave the peanut gallery a belly laugh when he up and sent two flights carrying 50 migrants to the place that snooty community activists Barack and Michelle Obama call home—namely, Not-In-MY-Backyard Martha’s Vineyard.

“Read Boot’s Twitter feed, however, and you’d think these migrants were sent to a 1942 German concentration camp as opposed to one of the wealthiest vacation islands in the country where President Barack Obama owns a nearly $12 million dollar mansion.

“[Governor Ron DeSantis’s] (sic) heartlessness and cynicism is hard to exaggerate,” Boot wrote on Twitter Thursday morning. “Beneath contempt. He would be very dangerous is (sic) he ever became president.”

“The Washington Post columnist also made sure to retweet a series of posts declaring DeSantis “cruel” and “vindictive.”
“Deeply deeply sick and dehumanizing to fling human beings somewhere vindictively,” wrote MSNBC’s Chris Hayes in a tweet shared by Boot.

“Jesse Rodriguez, an MSNBC vice president of booking, called the island preparing for the 50 migrants “unbelievable.”

“If Rodriguez thinks 50 migrants landing in a community where the median home sale price is north of $1.3 million, perhaps the network executive might benefit from a trip to the southern border where about 140 times that number of immigrants flood Texas cities daily.

“Abbott has spent weeks offering constituents desperate relief by sending illegal migrants bus passage to Washington D.C., New York City, and Chicago, where Democrats are forced to reckon with the crisis the administration has refused to acknowledge. The surge of migrants entering cities identified as “sanctuaries” many plan to escape to anyway has led their Democrat leaders to declare states of emergency over a mere fraction of what southern border towns have dealt with for years.”

Democrats’ current favorite Bad Boy DeSantis’ brilliant move triggered some of the most hilarious Tweets from the Peanut Gallery to date:

“BREAKING: Democrats have sprung into action and built an outdoor living center complete with beds and healthcare services for the 50 migrants at Martha’s Vineyard.

“Just joking! That’s the tent Barack Obama set up for his birthday party!” 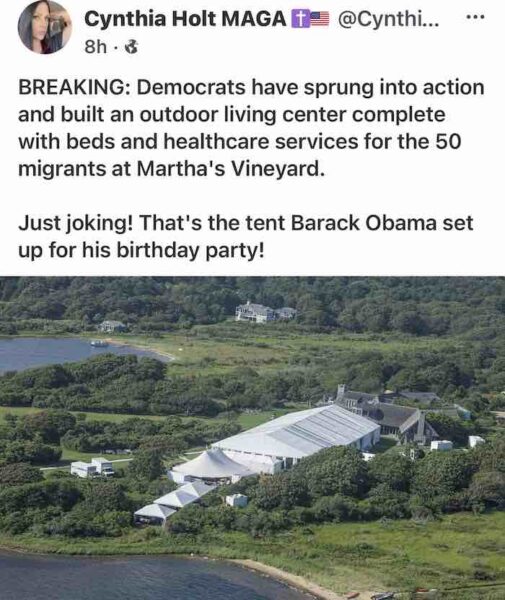 When Obama threw his 60th birthday at Martha’s Vineyard, claiming to scale it back—only after the British press reported on it,  American mainstream and social media kept mum.

“All weekend the media’s been in a tizzy trying to convince readers that Obama had tried to “scale back”  his 500-invitee birthday shindig. (Canada Free Press, Aug. 8, 2021)

“Nothing about narcissist Obama is ever scaled back.  Media hype notwithstanding, hundreds of guests attended the conceited Obama selfie birthday bash.

“Proving that Obama’s a “man of privilege” the Secret Service set up a no-fly zone and a no-drone zone over Obama’s $12-million mansion, that he somehow managed to acquire during his two-term presidency.(CFP)

“All media reports about Obama’s swaggering and dancing should have included ‘dancing over all the graves of people who died of the virus’, because that’s exactly what Obama, family and friends were doing.

“Making like John Travolta on a raised dancing floor shows the world precisely where the Democrat Party is taking the country.

“Guess among its many other media-inspired claims, COVID can easily distinguish between the sophisticated and the unwashed when it comes to Party Time.

The “meat-free” menu for ‘The Beautiful People’ at Barack Obama’s 60th birthday bash in Martha’s Vineyard should have deplorables out-giggling VP Kamala Harris.

“The menu is said to include Spam Musubi made with plant-based faux-beef and faux-pork and Eat Just’s plant based eggs. (Daily Mail

“With canopies and catering stations that dwarf the Obama’s mansion, DailyMail.com can reveal the true scale of the party that, according to the former president’s spokesman, was scaled back from a 500-person extravaganza to a small affair only for family and close friends.”(Daily Mail, Aug. 7, 2021)

“A sprung dancefloor was being laid next to the main house and leading onto a vast marquee. Inside long tables at which guests will dine were visible along with shabby chic dining-chairs of bleached wood and woven oval backs.

“Macramé rocking chairs and canvas outdoors chairs were stacked in preparation to create different moods and areas in which guests can lounge.

“A large raised stage at the far end of the marquee showed speakers and technical equipment unpacked and ready to set up and a multi-screen display. Segments of what appeared to be a wall of pictures of Obama through the years lay as yet unmounted.

‘President Obama is appreciative of others sending their birthday wishes from afar and looks forward to seeing people soon.’

“But as more plans became public this week, the former president came under fire for the tone deaf event as many areas of the country returned to pandemic restrictions, including mask mandates indoors.

If hypocrisy could HISS like the snake that it truly is, the biggest HISS should be heard across the fruited plains that Obama’s left wingers are in melt down about the diversity of 50 migrants having landed in NIMBY Martha’s Vineyard. 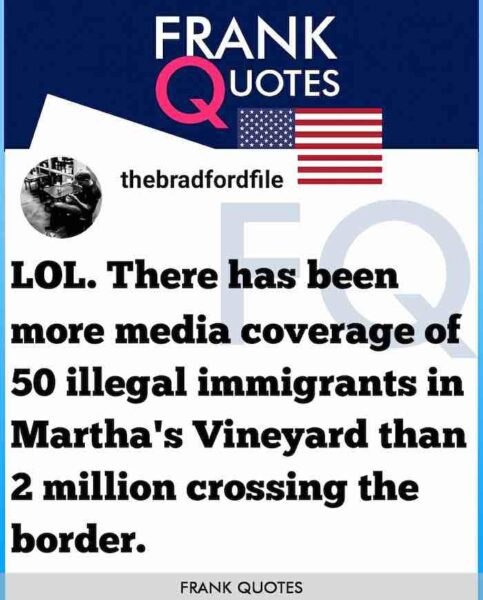 Judi McLeod — Bio and Archives — Judi McLeod, Founder, Owner and Editor of Canada Free Press, is an award-winning journalist with more than 30 years’ experience in the print and online media. A former Toronto Sun columnist, she also worked for the Kingston Whig Standard. Her work has appeared throughout the ‘Net, including on Rush Limbaugh and Fox News.

Judi McLeod — Bio and Archives — Judi McLeod, Founder, Owner and Editor of Canada Free Press, is an award-winning journalist with more than 30 years’ experience in the print and online media. A former Toronto Sun columnist, she also worked for the Kingston Whig Standard. Her work has appeared throughout the ‘Net, including on Rush Limbaugh and Fox News.