Today, at the Aspen Helicopters Hangar/headquarters at Oxnard Airport, FAA officials bestowed the coveted Wright Brothers Master Pilot Award on three longtime helicopter veterans, all senior pilots with local Aspen Helicopters, all with 50+ years of military and civil flying, FAA or CAA pilot’s certificate, US Citizen. All three got their start in the military, all three flew hazardous duty, and three had- are still having  long, productive, enjoyable careers after that.

Just to get into this exclusive club, you need to do that. Flying a helicopter, especially in combat zones, makes it even less likely that you’ll ever achieve those amazing milestones. But achieve them they did, as the FAA awarded  three intrepid men.

A crowd showed up in the cavernous hangar, spilling out on to the tarmac beyond, with helicopters arrayed in two sparkling rows.

Prominent local businessman and civic activist Charles McLaughlin, President of Aspen Helicopters and co-founder of the CA division in 1979. has been flying helicopters since not long after he enlisted in the Army in 1965, went to Officer Candidate School and flight school. He was deployed to Viet Nam in 1968 and  flew Cobra rocket and gunships as well as Hueys in combat. After leaving the army, he said, he ended up in San Diego. One time he was up in Oxnard Airport on a flying trip and secured a flying job for a promised $1000/wk, but had to work 7 days to earn that sum. He fought fires, flew in Alaska and much more.

Aspen Helicopters Executive VP and a division co-founder Richard Throckmorton has an equally engaging story.His father, a WWII 101st Airborne paratrooper who landed on D-Day, convinced him that being in artillery was an easier gig. He signed up, also went to OCS, but ended up in Viet Nam jungles- on foot, he said. One day he was on a helicopter flight and asked one of the guys with wings pinned on how to get in on that duty. “You ask,:” he responded, so he did, and the erst is history.

Jack Winover is a senior pilot with Aspen Helicopters. He went into the army in 1966 and also had the Viet Nam helicopter pilot experience. He says he stayed in until a 1975 reduction in force surplused him. He flew with Petroleum Helicopters for many years before ending up at Aspen Helicopters.

The helicopter mechanics also got very hearty applause. Any helicopter pilot worth his salt understands that keeping those contraptions mechanically sound to stay in the air is quite an accomplishment and that they owe their lives to said mechanics just as much as their own flying skills, wingmen and support groups. 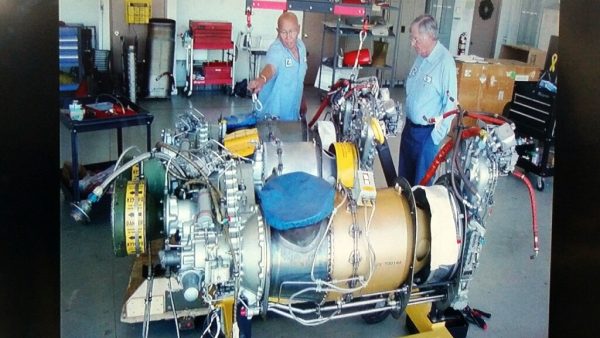 Even Combat Helicopter Pilots Defer to Them

The awardees also recognized other prominent pilots who had come to pay tribute. At one point, Mr. McLaughlin pointed out Dan Pinkerton, sitting unobtrusively on a back bench near the tarmac. He identified him as a “dustoff” pilot. These are the guys that go in to fly out the wounded, rescue downed pilots, etc, in often very dangerous conditions,. Even grizzled combat pilots pay them special respect. Pinkerton. He was the CO of Hal ( Helicopter Assault Light) Five at Pt Mugu until the unit moved to San Diego.

Another former pilot  showed  up in a wheelchair and also an ex-Chinook pilot. Those were huge dual-rotor machines.