In spite of a seemingly almost total news media blackout, enthusiastic Trump supporters packed Channel Islands Harbor in Oxnard with flag and sign-festooned boats on Saturday, October 3. Those who didn’t have places on boats showed up in kayaks, paddleboards, jet skis, or lined the shore and Channel Islands Harbor Blvd bridge, waving flags & signs while shouting and singing. The mood was very ebullient and the weather foggy. This has been a national grassroots phenomenon, not connected with the wildly successful Trump rallies on land.

Participants learned of this event only via Citizens Journal, sponsor wehaverights.org, social media and word of mouth. No one had any idea of how successful it would be, but a hint was that local boaters started referring to it as “Trumpzilla.”

The lower harbor was congested beyond capacity, making navigation very difficult at times. We haven’t seen a larger boat procession in our 40 years of coming to this beautiful harbor. Check out the restaurants, recreation, boat trips and rentals, hotels, marinas, museums and uncrowded ocean and harbor beaches HERE. MORE.

The event started sooner and much bigger than planned. Organizer Gina Bacon told Citizens Journal two days ago that 50 had signed up and more were inquiring. Our conservative estimate was that there were about 200 boats with an average of about 7-8 people aboard, plus numerous small craft such as kayaks, paddleboards and jet skis.There were also hundreds on the shore, some with canopies, RV’s and tents- and the omnipresent Make or Keep America Great Again flags. Organizers told me that the Harbor Dept estimated 300 boats. So, a low end estimate is that 2000+ people participated, high end 3000. 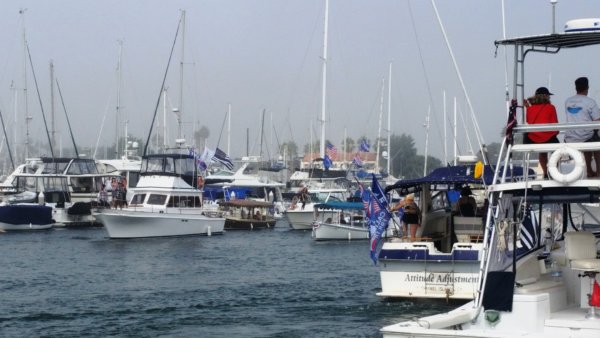 The 45 ft power catamaran lead boat contained organizers, local dignitaries and candidates who had to be conservative pro-Trumpers, which cut the list of possibilities down to a manageable number in this deep blue region. PA announcements echoing through the foggy harbor reverberated with the names of candidates Donald Trump, Mike Pence, Ronda Kennedy(26CD), Charles Cole (37AD), Denise Pedrow (44AD), Gary Michaels (SD19) and Joe Collins (CD43). Also present was Senior Pastor Rob McCoy of Calvary Chapel Godspeak, who has led the charge in fighting shutdowns of churches, while riskier venues are open.

It was an honor to celebrate such a successful President with our American Family today, showing support to reelect Mr. President Trump for another four years!! We are fighting for America simultaneously fighting for our American family that has fallen victim to the manipulation of lies. #TRUMPZILLA was in full effect on the waters in Channel Islands Harbor today!! We are so delighted everyone had SO much fun and felt the unity they deserve!! Let’s keep this going!! #TRUMP2020

About a year ago I began saying aloud I thought President Trump would win re-election and that he would take California! Saturday’s Channel Islands Harbor Trump flotilla and countless others up and down the Golden State’s coast and the car parades and rallies in the Inland Empire strongly suggest the predication of a California success for the  President may not be so far-fetched! Thousands of people turned out to support the President, honoring him and reveling in the countless policy successes he has brought about with his America First focus. The Trump Train ride is exhilarating, hope-filled, and fun. It satisfies the soul to participate in these history-making events! Thousands of people were cheering the President, supporting law and order, and celebrating our Constitutional way of life. For us it is not about the “party, it is about the principles the President pursues on behalf of all liberty-loving people!

Gina Bacon of wehaverights.org was the lead organizer, assisted by a very action-oriented staff. Clearly the event came off as advertised, with better turnout than expected. The downside was the resulting harbor congestion. The group was also pushing the recall of Governor Gavin Newsom ( RecallNewsom2020.com ) for acts both illegal and counterproductive to the freedom, health, safety and prosperity of the People of California. They are particularly incensed about the (mis)handling of the COVID pandemic “lockdowns” (a prison term). Reopen California is another of their projects. Bacon requests that interested people register with them and support the movement. 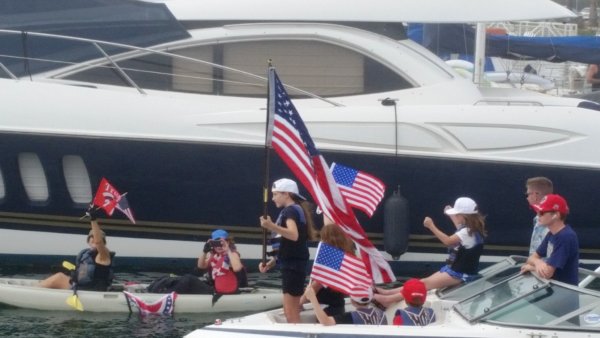 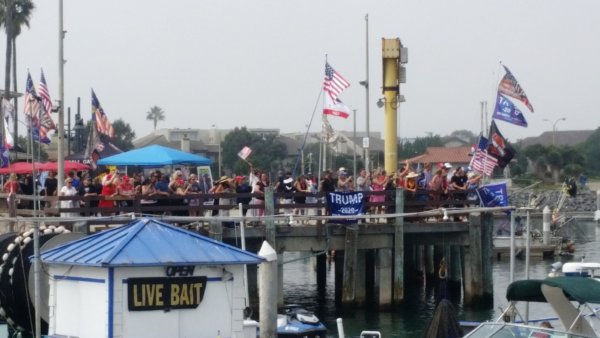 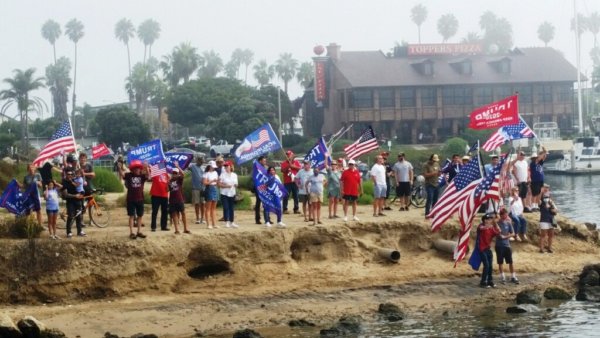 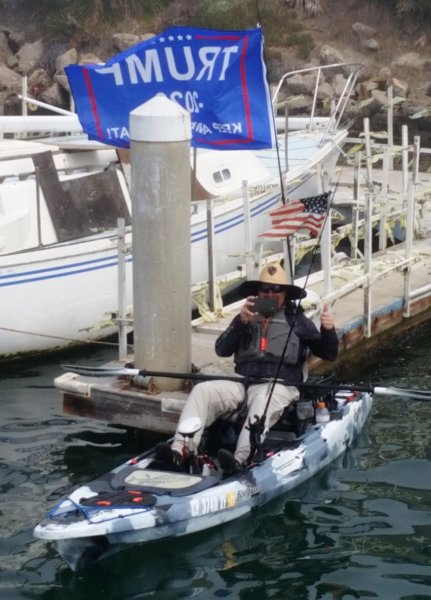 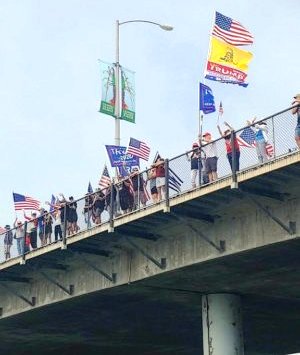 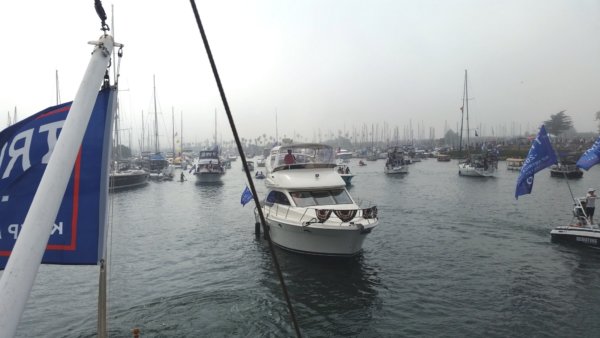 We may add to this article as information comes trickling in from participants, so check back here.

Come join us for this peaceful boat parade for Trump 2020! Hope to see you there. There will also be a Recall Newsom and information booth at the big dock just north of Sea Fresh restaurant. Need a Trump flag or sign? [email protected]     https://WeHaveRights.Org

I had a great time paddling my kayak amongst the beautifully decked out boats. The energy and positivity was infectious and anything but angry. The only negativity I experienced was from drive by Biden supporters shouting expletives as I was loading my kayak on to my truck.

Hi Steve. I’ll see yo out there.

My girlfriend that lives on the main channel was flipped off and threatened because she had a Biden flag out. Disgusting.

I missed this, so bummed! Will this happen again? How can I sign up for future events?

Go to nextdoor.com and do a search for Trump parade, it should show things in your area. I’m looking for best places to find these too. So far, that’s the best source. On Citizens Cournal, this paper, if you search “Trump parade” there is on Oct 31 at 10 am in Camarillo.

So relieved to see so many of my neighbors are in support of the Constitution, freedom of choice, speech, Religion and all of the other things that President Trump is working to keep for the citizens of the United States. There is so much negativity in this country right now. Thank you to the organizers and all of you supporters who turned out for it. After living for 88 years, FDR being in office when I was born, I was about to give up because of the way the news media, Democratic Party, social media has so convincingly made up lies to our young people about the President. I, and mine, are so encouraged by your show of support.

Stop watching fake news. Read Epoch Times and watch NewsMax and OAN. You are being had by media and hollywood. Grow up and get a brain.

I was there! It was amazing! Get better Mr. President we need you another 4 years!!

What a great, spirited, America Trump loving day this was- So GLAD Ventura County finally got on the ball and had this boat parade. It was long overdue- maybe we can fit another one in before the election-I am sorry that everyone could not be there to participate and witness the united patriotism that was present- I am so proud to have been among those who could make it-

Thank you to everyone who had a part with helping to organize this honorable patriotic event, a huge display of love, appreciation and support to President Trump! God Bless America and God Bless President Trump!!

What an exciting event in these most troublesome times.
Thanks so much to everyone who coordinated, worked and showed up!
TRUMP 2020 ~ 4 More Years ~Get Well quick Mr President!

It was a great satisfying day. I was lucky enough to skipper our vessel “Pelican” out of Ventura Island Marina during the parade. We had great people on board and a lot of the photos were taken from our vessel. Proud to have a wife like Deborah Baber supporting everyone in attendance. Proud to be associated with the great staff of CITIZENS JOURNAL.

It was a very positive event and we had a great time! The only downside, in my opinion, was the fog which limited the view of the boats and crowds.

Thank
Great article…thank you so much for putting this together. Went down with a friend to to support the Channel Island Trump Boat Parade from the side lines…we decided on a whim, to charter the Lucky Strike vessel…and low and behold…..we made the article via a few pictures….how beautiful is that….Trump 2020…..A great big Thank you to all the outstanding Patriots in our community…❤️❤️…so much love…patriotism and appreciation for all that is good in this beautiful state…….this movement can turn our state around….❤️❤️

Make sure to send this article to the President. It will cheer him up!!