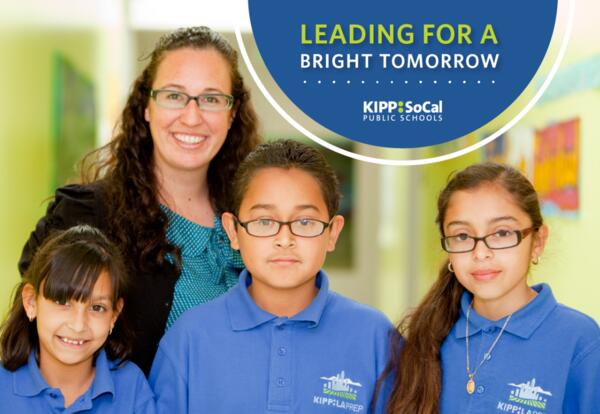 “I could not be more excited to lead this extraordinary community of learners and educators,” said Martinez, whose own child attends a KIPP SoCal Public School. “This is a pivotal moment for public education here in Southern California and across the nation. Coming out of the pandemic, and in the midst of a vital racial reckoning, we have the opportunity to reimagine what public education should look like so that it honors the strengths, diversity and potential of every single student.

“KIPP SoCal has always been a leader in bringing equity and justice into the classroom,” Martinez added. “We will continue to deepen our commitment to being a pillar of inclusiveness, safety, academic excellence, socio-emotional growth, and celebration for the communities we are honored to serve.”

Growing up in San Diego, Martinez participated in a desegregation program that bused lower income students to public schools in higher income neighborhoods.

“I was a bus kid,” she explains, noting that she was one of few Black and Latino kids to attend the magnet school in which she enrolled at five years old. “That experience was difficult on many levels, and it’s one reason why I’m so committed to making sure every student at KIPP SoCal feels welcome and part of the school community.”

Martinez has 20 years of experience as an educator, including several years as a classroom teacher, school leader, and senior nonprofit leader. She was a teacher at Dr. Ralph J. Bunche Elementary, which became the first California Distinguished School in the Compton Unified School District. In 2008, Martinez became the leader of KIPP Los Angeles College Preparatory School in Boyle Heights, which within her first year became the seventh highest performing middle school in the Los Angeles Unified School District. The school was recognized as a California Distinguished School, and later as a National Blue Ribbon School.

From 2013 to this year, Martinez served as the Chief Academic Officer of KIPP SoCal, supporting 20 school leaders and leading the organization to be one of the highest academically performing networks in Southern California. Born and raised in San Diego, she holds dual masters’ degrees from UCLA and Loyola Marymount University. She is also the mother of a middle school KIPPster, as KIPP students are known.

Is “equity and justice” code for critical race theory at KIPP SoCal?