Chances are that we all know someone who’s a bit of a bluffer, whether it’s harmless white lies or serious untruths. But does lying come more naturally to certain people depending on where they live?

We decided to dig deeper and investigate which states across the U.S. are officially the biggest bluffers (and which are the most honest).

To do this, and to help you out in your next poker games, we’ve compared each region across a range of factors, including how often people living there make a series of common Google searches. Read on to find out where each state ranks among America’s biggest bluffers.

What Are the Most Dishonest States?

According to our research, we can reveal that America’s biggest bluffers live in Wyoming. In fact, the Equality State scored a staggering 80.5 out of 100 on our index, with main contributors including having the highest rate of searches for ‘How to bluff’ (300 searches per 100,000 residents), as well as having the second-lowest overall integrity score (51).

Maine comes in third with an index score of 64. The main contributing factors to the Pine Tree State ranking among the most dishonest include a higher divorce rate than any other region (13.9%) and

What Are the Most Honest States?

We’ve looked at America’s biggest bluffers, but which U.S. regions are the most honest?

With the most favorable overall index score of all states, we can title California the most honest of all, largely because of having America’s fifth-lowest divorce rate (9.1%) and second-highest integrity score (73).

Next up is New Jersey with an index score of 28.7, followed by Iowa (29.2) and Mississippi (30.6). In fact, Mississippi records the lowest rate of Google searches for notorious affair-seekers website ‘Ashley Madison’, with just 98 per 100,000 residents.

We’ve looked at the most dishonest and honest states, but which regions top the list for each factor we’ve considered? 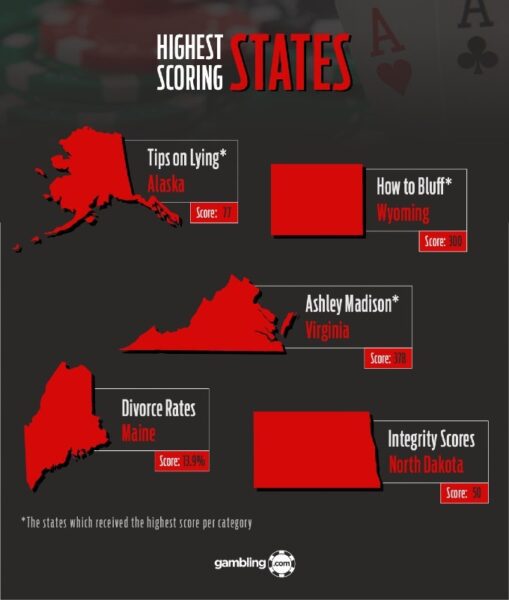 Google Searches for ‘Tips on Lying’

Google Searches for ‘How to Bluff’

Ashley Madison is an infamously illicit website that facilitates affairs among adulterous couples. Comparing each state by the number of Google searches of ‘Ashley Madison’, Virginia comes in first, with 378 per 100,000 people. Meanwhile, Colorado (375) and Connecticut (335) place second and third, respectively, followed by Nebraska (332) and Illinois (316).

Comparing divorce rates across America, no state has a higher rate of separating spouses than Maine, with 1 in 7 couples here (13.9%) ending their marriage prematurely. Nevada’s not far behind, with 13.8% of marriages ending in divorce, while New Mexico (13.3%), West Virginia (13.2%), and Oklahoma (13.1%) round out the Top 5.

Rating each state according to their overall public integrity score, none is more untrustworthy than North Dakota (50), closely followed by Wyoming (51) and Michigan (51). Meanwhile, Delaware and South Dakota round out the Top 5, each with scores of 56.

With the results in, we can officially name the states that should statistically be the best at bluffing their way through any situation. For even more interesting insight like this, check out all the latest news in our world; or, if you also consider yourself somewhat a bluffer, enjoy exploring our latest online casino offers.

To determine the USA’s biggest bluffers, we created an index that considered five key factors with individual weightings adding up to 100.

To create the ranking, we combined the score of each factor to get a final index score out of 100. The higher the score, the more dishonest the state.