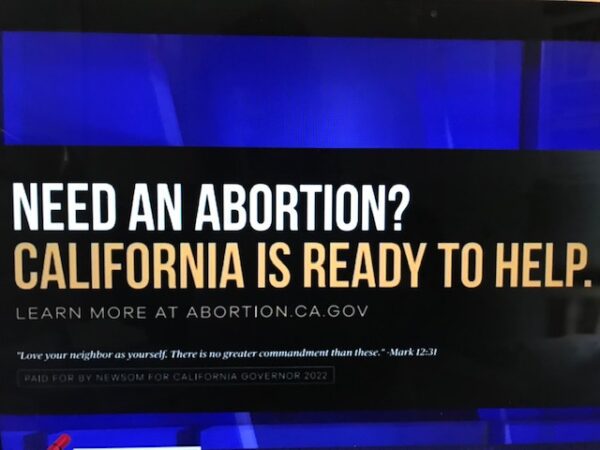 The billboard campaign which states: “Need an abortion? California is ready to help” was launched in Indiana, Ohio, Oklahoma, Mississippi, South Carolina, South Dakota and Texas with the website: https://abortion.ca.gov/ which also lists 169 California in-person abortion providers as well as six virtual providers.

The advertising campaign also includes a scripture verse (Mark 12:31): “Love your neighbor as yourself. There is no greater commandment than these.”

“This invokes (that) trying to protect a baby from being killed is not loving your neighbor,” said CeCe Heil, Senior Counsel for the American Center for Law and Justice (ACLJ), one of the most prestigious law firms in the nation. “This is using a bible verse to justify killing of a baby…There always has to be a justification or you can’t kill a baby.”

“Gruesome Newsom invokes Christ for evil law” is the name of the Sept. 20 ACLJ broadcast with Chief Counsel Jay Sekulow calling the campaign “evil…using the words of Jesus is a heck of a gusty move in a horrible way.”

(Editor: To hear the ACLJ broadcast go to: https://aclj.org/radical-left/gruesome-newsom-invokes-christ-for-evil-law.)

In a Sept. 13 news release from the Office of Governor, Newsom states:

“Abortion is legal, safe and accessible here in California – whether or not you live here, know that we have your back. As Republican states continue rolling back fundamental civil rights and even try to prevent people from accessing information online or crossing state lines for care, you’re welcome here in California and we’ll continue to fight like hell for you.”

Joy Stockbauer, a policy analyst for the Center for Human Dignity, told The Christian Post: “Governor Newsom’s disrespect for the sincerely held religious convictions of Bible-believing Americans is disturbing, but sadly nothing new from far-left extremists within the Democratic Party.

“Perhaps Newsom wouldn’t be so desperate to draw vulnerable women to California if his actual constituents weren’t fleeing the state in droves due to his unwillingness to address the rampant violent crime problem.”

The abortion website received funding through a $200 million budget package funded by taxpayers as California seeks to be a sanctuary for abortions. The website states that California law allows minors to “independently consent to their own abortion care” despite any objections from their parents. The website links to http://www.teenhealthrights.org/ which tells minors they do not need your parents’ or caregivers’ permission to get an abortion if you are under 18.”

The Christian Post reported on Sept. 2 about California’s “historic” bill package of nearly a dozen bills that “erases the idea of an illegal abortion” passed by California lawmakers. They include:

We the people must stop Satan’s son Gruesome Newsom from stealing the governor’s election this coming November, Gruesome is clearly promoting the works of his father Satan, we must vote his ass out of office with God’s help will do it!

That’s all you got? Name calling?

Great analysis Hector. Thanks for adding your original ideas to the discussion. Not.