Off the grid Thanksgiving

For those Jack Fliehmann serves, Thanksgiving comes each day. Almost like clockwork he shows up at local homeless encampments at 5:00 AM sharp with a two-gallon steaming pot of oatmeal, a banana, water bottle, and juice for the 70 to 100 folks he serves on a regular basis.

Later on, he returns to these same places with a hot entree for these unfortunate souls who live a subsistent life with no real place to call home. To these living underneath freeway on ramps, along flood control channels and under park benches, Jack brings food, clothing, a cell phone charging station and most of all hope for a better life.

As part of Jack’s genuine love for these people, he reads a verse from the Bible with each plate served. Handwritten on a 2” x 8” index card by his wife Donna, these brief prayers are read to the recipients of Jack’s informal ministry for reflection once he departs.

Jack has been doing his “meal ministry” since last January.  He started to perform this service after receiving a revelation from above to perform God’s work. This involves him making deliveries twice a day with no time off.

At first Jack paid for every item distributed to his homeless friends.  Later, individuals, churches, and others have helped out providing resources to reach the needy who survive without a real place to call home.

Unlike government and charities that assist the needy, such a structure does not exist in Jack’s world.  Those who contribute to his work do not receive income tax deductions for their donations.  Their credit comes from a higher authority than even the IRS. While others who provide detailed records on their activities to apply for grants and funding, Jack sees no reason to carry that burden.

While his system might discourage the casual do-gooder, it actually works out better for him.

As an example, the Country Health Department regulates the food kitchens of nonprofits and churches because they are businesses. This makes them comply with laws that restaurants and kitchens must follow. This is an expense Jack does not need to worry about because his charity work is not tied to a legal entity.

So when Anna-Maria drops off some of her “Mexican Mama homemade burritos, they are distributed without being encumbered by governmental regulations.  The same applies to Greg who serves a hot lunch to Jack’s appreciative clientele each Saturday. County bureaucrats are left on the sidelines while this philanthropic work goes on without interruption.

Even more tangible than offering material goods, Jack gives love and spiritual blessings to these individuals who society has seemingly passed by.  Following this modern day Mother Theresa around, it is obvious a strong bond exists between Jack and the multitude of homeless folks he visits each day. 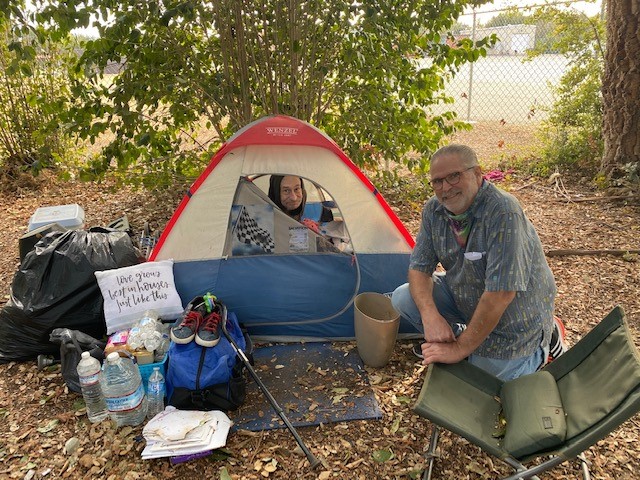 Despite a seemingly tight schedule, Jack always finds time to connect with each person he meets. Typical is Shawn, who lives hidden behind a fence between a Costco Store and a flood control channel. Disabled and unable to fend for himself, he depends on Jack to provide the necessities of life. Various social agencies are aware of his plight but have not been able to provide needed services to place Shawn in a safer and more secure environment.

Then there is Chad who lives in a car he purchased three months ago with some one-time unemployment benefits. He has no income, so putting together a few dollars each week for gas is always a struggle.  It is a hard life for Chad and was even more difficult for his Mom who recently passed away after suffering a stroke in her son’s vehicle.

Chico is another story. An immigrant from Mexico he has no formal support from the government or private sector.  He moves around from Martinez to Concord each week to find shelter. While being served a meal, it became evident there was no way for Chico to secure his prized bicycle.  To assist, Jack gave him a $10 bill to purchase a lock.

While a significant portion of those who Jack serves are victims of losing jobs and general bad luck, others have mental disabilities that are accentuated by alcohol and drug use.

Typical is Heather who has a long history of anger issues that have landed her in jail on several occasions.  She is one of many homeless that need not only a decent place to live but also physiological counseling.  There is no doubt meeting with Jack each day helps her better cope in a society that has abandoned this tragic creature.

Many other people who Jack serves may not have mental health issues prior to becoming homeless, but develop what amounts to PTSD symptoms suffered by soldiers after spending time subsisting on the streets. With everyone encountered, Jack tells them he and Christ loves them. Although such words might seem trite, they help ease the pain of living under squalid conditions. 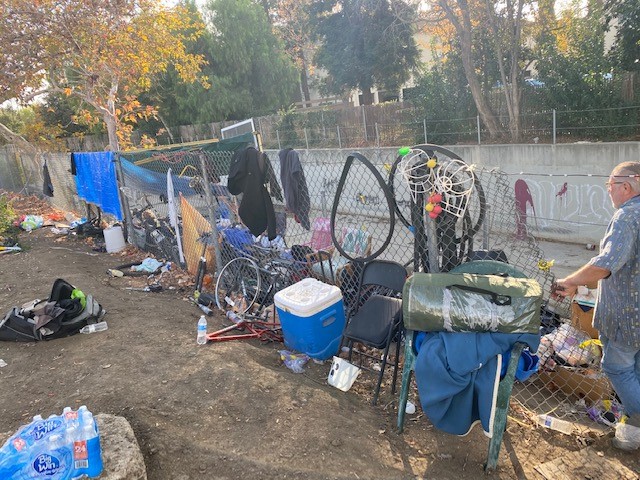 Outside of providing meals, Jack also distributes toiletries, sleeping bags, coats, socks, and other necessities needed to survive in the streets.  Some of these items are purchased out of his own funds while others are gifted by community members.  An anonymous donor recently left 40 pairs of mittens on Jack’s doorstep. Such donations are a typical, almost daily occurrence.

Each of the 100 or so people Jack works with on a regular basis all have a unique story that he patiently listens to each day.  More than anything, we learn there is no one cure dealing with homelessness.  To make any sort of dent solving the crisis it will take intervention from both government and the private sector.

For Jack Fliehmann every day is essentially the same.  Thanksgiving, holidays, birthdays, and weekends occur with little fanfare.  He is but one man out on a mission to help a relatively small group survive in a society that has turned their backs on them.  His biggest reward came recently from a handwritten note from a man who was able to lift himself from homelessness. It read:

Jack I want to let u know that I appreciate you. have made our lives hopeful again I was really ready to give up with hope that the peoples judgment on the homeless that there are still people out there that don’t judge us an believe in us God is good an u are wonderful i jus want u to know that I can wake up every day knowing u are going to be there an before to be honest with u I wish I didn’t wake up but u opened my eye to see there is hope an not to give up on this life i want to thank u 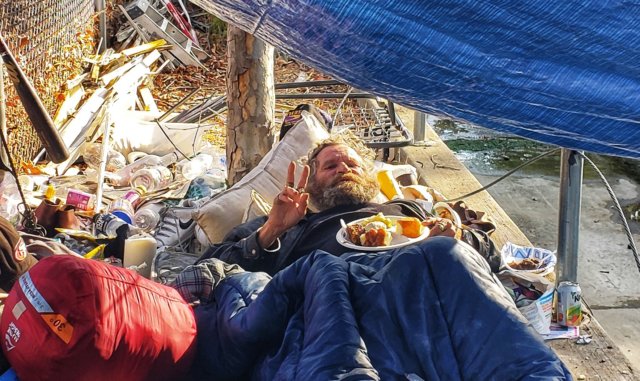 Thank God for this man and his work. By accomplishing this within the local environment of seething hatred toward the least fortunate, he is striking a blow against the demons that inhabit our local leaders. This is a real hero, and thank you for publicizing his work