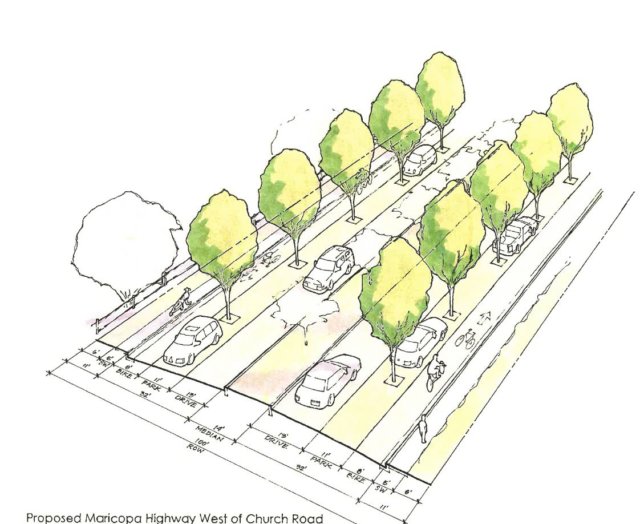 .
The first thing to notice on the 5-STOP plan is the absence of any vehicles using the street, most laypersons (including some City Council members) may struggle visualizing how a site plan such as this may be utilized by the driving public.  In my experience having practiced architecture in California for 40 years, many clients cannot “read” floor plans, so often they are disappointed by the result under-construction, making costly last-minute changes.  We do not have that luxury, since State funding is limited, and the City has no reserve fund for this project (change orders).
.
The second thing to notice is that the plan fails to adequately show how all 4 streets (Cuyama Rd., El Roblar Dr., Rancho Rd., and Hwy 33) converge on Maricopa Hwy, with just 1 travel lane and parallel parking between trees in what was the right lane.  Please visualize a car trying to parallel park between trees in the first few spots on Maricopa Hwy closest to El Roblar, with vehicles at all 4 intersecting streets attempting to enter Maricopa Hwy (happens all the time).  Now envision that occurring at 7:30am on a school morning.  Vehicles will be backed up on El Roblar all the way to Lomita Avenue (during school days they were already backed up), other vehicles will be backed up on Cuyama blocking vehicles from exiting nearby Montana Rd., not to mention Rancho Rd and Hwy 33 going east.
.
Now envision greater congestion and gridlock during football games, graduation, July 4th festivities and the Special Olympics.  Documents found on the City’s website confirm what I heard Greg Grant say during a meeting about lane reduction on Maricopa Hwy.  Greg stated that because these popular well-attended community events only happen a few times during the year, the inconvenience will be minimal.  I disagree with Mr. Grant, I believe making special community events which bring residents together a few times a year is vitally important (we all look forward to these every year along with the parade), so making it especially difficult to travel to Nordhoff HS, park and attend, will reduce their popularity.  When it is less attractive to attend an event, less people do.  Our community will suffer immeasurably.
.
By eliminating a thru vehicle lane, cars attempting to park will significantly delay drivers and their passengers.  Have you ever tried to parallel park while there was a lane full of cars waiting behind you?  Oftentimes, people (like myself) become flustered, and need to try several times before we can properly parallel park along the curb, and in this current plan, drivers won’t even have a hard curb to judge distance (the curb is replaced with unattractive striping).  Imagine someone having a flat tire or an accident with someone pulling out of a parking space (it is widely reported in LA Times that accidents actually increase with lane reduction), with no second lane, all traffic comes to a standstill, and accidents occur all the time.
.
Now instead of a passenger vehicle, picture a large truck (there are many) and/or motor home attempting to enter Maricopa Hwy with just a single lane while someone is trying to parallel parking (between trees).  Try visualizing the MRI truck regularly going to/from Ojai Hospital trying to maneuver onto Maricopa Hwy from Cuyama Rd, because this enormous vehicle, exceeding 50′ long, will no longer be able to make a U-turn at Church Rd due to lane reduction.  Now the MRI truck must turn right onto Church Rd. (won’t all those residents of the estimated 150-unit Hitching Post Estates, mostly seniors be pleased) take a left onto Cuyama Rd (if it can maneuver) and then take another left onto Maricopa Hwy.  Please have the City’s consultants draw the turning radius for the MRI truck on the plans to verify the 50′ long vehicle can maneuver onto Church Rd, Cuyama Rd and Maricopa Hwy.
.
Given the difficulty to maneuver onto Maricopa Hwy from Cuyama and backups at the 5-STOP, plus delays caused by vehicles attempting to parallel park (between trees) while other vehicles wait and backup, it is inevitable that emergency response times will increase dramatically (how can they not?).  When another firestorm strikes the Los Padres National Forest just up the road on Hwy 33, how will residents’ vehicles pass through the 5-STOP safely, certainly not by using the bike lanes, which will need to have removable bollards at every intersection to prevent drivers from mistakenly confusing the bike lane for a vehicle lane (I have seen it myself).
.
The current design/plan lacks the flexibility needed to handle changing circumstances (unexpected emergencies), and because we cannot predict the future, the current lane reduction plans are a disaster waiting to happen.  Rather than listening to what others (City Councilpersons, Bicycle Advocates) say about the ATP project, look more closely at the potential impacts of proceeding with an unproven (“aspirational”) design, turning a rural 2-lane blacktop into an urban (congested) street with limiting views into the Los Padres National Forest.
.
Lastly, please see the 10/4/2018 Administrative Report, page 5 of 6 (attached above), line item titled “Bicycle Advocates”. Bicycle Advocates  With regard to Maricopa Hwy, Bicycle Advocates enjoy an over-sized role in determining public policy, none of the participants in discussions reported in the 10/4/2018 Administrative Report included local residents, commuters, and drivers who regularly use Maricopa Hwy.  Although those most affected by lane reduction on Maricopa Hwy live in Meiners Oaks and Ventura County, none of the included participants live outside the City limits.  Why was the general public (taxpayers) excluded from these private early discussions (2015-2017) held on Wednesdays at 2:30pm when working people are not available to attend these meetings?
.
Jeffery Weinstein is a Ventura County resident and architect
Get Citizensjournal.us Headlines free  SUBSCRIPTION. Keep us publishing – DONATE
- Advertisement -
Donate Now
July 30, 2020

Mona is a republican troll…shame on you for getting trumpy about this.

Nancy Decker is correct, the Ojai Valley News will no longer publish my Letters to the Editor and others opposed to lane reduction, please ask publisher Laura Rearwin Ward ([email protected]) why her paper will not print opinions she is not in agreement with. Jeff

they want you out of your cars and on bikes….. Democrats need to be put on notice that they are really not good at planning or leading anything really…. what isn’t messed up currently >>>>? VOTE RED IN ALL ELECTIONS STOP THE MADNESS

Why would lane reduction even be considered in an area where there is already traffic back up?

What about the hospital and Dr’s. Isn’t that of major concern in this intersection.

Bravo! You’ve clearly articulated these issues and your research is extensive and thoughtful.

One other concern is the heavy emergency vehicle race every weekend to rescue motorcyclists that ride further up the canyon (to Rose Valley and beyond.) Their transport to the hospitals in Ojai and Ventura would certainly be delayed by restricted traffic due to lane reduction.

Thank you for getting the word out. We appreciate your publication. The local news source of Ojai has censored several OpEds that oppose City Councils lane reduction; therefore the voice of concerned residents has been silenced.