After 20 years of little action by the city except stopgap repairs and studies, the current Oxnard City Council voted unanimously on 10-6-20 to agree to fund half of the estimated $200 million to renovate the Channel Islands Harbor Mandalay Bay neighborhood seawalls, for up to a 75 year additional life. The walls were built in the early 1970’s and are insufficiently resistant to the saline environment, earthquakes and are well past their useful life. This would be done over a period of many years.

The City wants the homeowners to form a special district to fund their half. This requires a vote, a difficult step. The average homeowners share would come to $135,000, so it would likely be financed by a bond and maybe current revenues over a 30 year period. There will probably never be a better time to borrow than at today’s low rates. However principal payments alone would come to nearly $4500/year/homeowner, a whopping increase in property tax bills. It would be $3.3 million annually in principal payments alone for the city. Add about 3-4+% for interest and various fees. Homeowners with long canal frontage or higher property values would likely be assessed much more than most other homeowners, who would pay less than the average. There is also a possibility of defraying some of the costs via a FEMA or other grants.

The City has no plans at this time for how it would fund its share the project. Local homeowners pay considerably higher property taxes than most other Oxnard residential properties. Some of that money plus sales tax money flows into the city treasury. Existing homeowner assessments to cover landscaping, waterways maintenance, dredging and seawall repair are woefully inadequate, at $492,000 annually. We were told that assessments are already as high as allowed by law, but homeowner association rep Debby Mitchell told us that is untrue. She says an assessment increase is the most direct way to do it, but it is harder to control where that money can be used. Another approach would be to establish a Community Facilities District (CFD) for funding and management.

We understand that City Manager Alex Nguyen and Councilman Bert Perello were key to moving this along and were supported by the Council (unanimously) and Public Works staff.

Discussions are still underway about which repair methods would be most cost-effective and least disruptive.

The Channel Islands Waterfront Homeowners Association was granted time to present its case.

The City was asked to share 1/2 of the Mandalay seawall repair/replacement costs. Public Works Director Rosemarie Gaglione said the city will consider a resolution to commit to share 1/2 of the Mandalay seawall repair/replacement costs.
There are 743 residential units with reinforced concrete seawalls. These walls don’t meet today’s seismic standards and have corroded due to concrete insufficiently resistant to the salient environment. New concretes are more resistant.
Residents are now paying assessments for waterways/seawall assessment. Hundreds of repairs have been done over the years. Trans Systems has analyzed defects in seawalls. The city needs value engineering to boost the cost/benefit  ratio. Tetra Tech is evaluating and costing alternative approaches.
The current cost estimate (it keeps rising) is $4155- $4277/linear foot for a 75 year life.
An alternate method is to strip off some of the concrete, place dowels and place concrete, for a 20 year life. 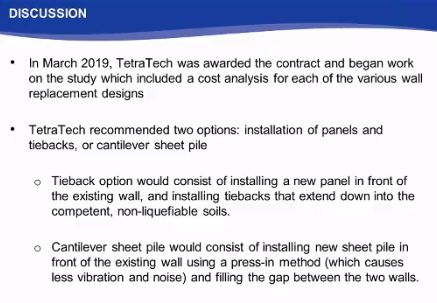 Residents may authorize a CFD for residents to fund half of the $200 million estimated project cost.
Resident Debbie Mitchell, VP Channel Islands Waterfront Assoc (Special District waterways assessment District #1, founded 1972) presented for HOA:
They object to making formation of CFD a precondition. Had been working on negotiations for decades, to no avail.  City owns the seawalls. Residents feel it’s city’s responsibility. Need  a plan for city/residents partnership.
Current homeowner tax assessment includes seawall, waterways, dredging, greenbelt, maintenance. Will require a special district to fund this project. Assessments have been the same since 1993, but cost and awareness have increased. Various studies have been conducted to assess status and improvement plans.
City staff and officials personnel turnover has delayed progress. $13.3 million is needed for next 15 years estimated plus $1.5 MM for dredging. (Far more would be needed for the full project).
Water quality was an issue due to storm drain runoff.
City wants to double the assessment or do a bond. No plans were ever brought before city council.  City cannot afford it now. 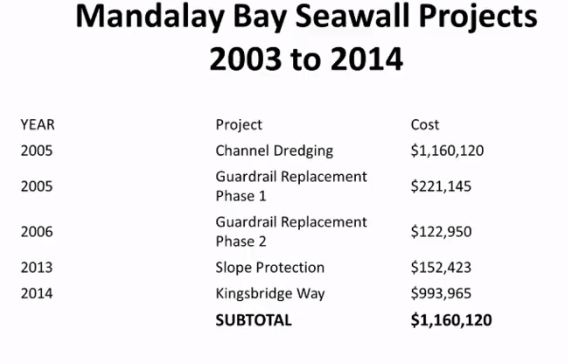 Every City Manager, every Public Works Director has said it needs to be done. 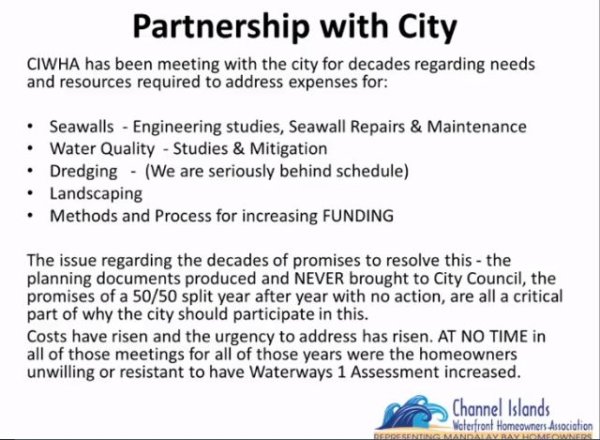 HOA speakers: Bill Clark, Connie H, Carol Taylor
Carol Taylor- It is city’s responsibility to maintain. Assessments are only $492,000 for everything. Landscaping alone is $300,000+.  Lack funds for seawall maintenance. Need: 1. City approval. 2. residents CFD/funding mechanism. 3. Public vs private benefit ratio. The channels are the alleys behind our homes.
Connie Heagy- Disagree with statements in city agenda document, but discussions were more like a focus group, no realistic, workable plans were presented. Re: Transportation Committee 3-0 approval plus striking CFD requirement. Yet city document doesn’t show the deletion. Statement says there is no immediate financial impact. Seeking grant funding to offset city expense, but should offset the TOTAL cost. Tieback method description doesn’t specify how much space is lost, only for cantilever method. Are there other repair options?
Bill Clark- President of C.I. Homeowners Association. Working on this for 20 years. Previous city officials unwilling to address this. Deterioration of seawalls does not stop for recessions, deficits, etc. Need the resolution to get homeowner approval of CFD. It is Oxnard’s responsibility to maintain. Seawall collapse would compromise homes, affect property values throughout the harbor. (and have huge liability for the city)
Patricia Younis- Longtime dispute about ownership of seawalls. The City owns them. Tract maps show city ownership. Maps and owners’ certificate make that clear.  Streets, parks, channels, seawalls are included.
Council questions:
Perello- would too much canal width be taken by sheet pile method? A: Yes 8-10 feet from each side is too much.
Public Speakers
James Aragon, candidate for Treasurer- Glad staff is seeking resolution after decades.  People will have to pay the consequences for many years. Homeowners willing to pay for half. It is the city’s liability. Potential seawall failures if this isn’t done. $800,000,000 to replace otherwise. Affects people outside the neighborhood.
Jim Cowell- Mandalay homeowner. Much frustration due to delays and staff turnover. Large recapitalization costs, but not acting has a greater cost. Earthquake risks.  Tetratech presented many options- top two were presented by Public Works Director,
Council, Staff Discussion
City Manager Alex Nguyen- Understand context, frustration, realities. It is hard to go back and understand why decisions were made, what codes were. This should be paid by all generations  because all are benefiting. Alex put this before the council. City managers can only recommend, not commit.
Perello- As distasteful as cost is, it must be done. This is the best we have. Supports.
Ramirez- Thanks to HOA. We didn’t know what we didn’t know.
Flynn- Been involved in this since elected in 2004. Money has always been the issue. Tacit commitments made by some council members. Acceptable compromise.
Vote: 7-0 unanimous in favor.
10-7-20 Statement from Channel Islands Waterfront Homeowners Association by Debby Mitchell:

8/26/1975  “Residents appeared to address concerns regarding algae vacuuming, naming of Waterways and whether or not homeowners should bear full cost of Waterways Maintenance.”

The historical records have been preserved and passed on over the years through volunteers with the Channel Islands Waterfront Homeowners Association (CIWHA).

Current HOA President Bill Clark shows up in historical documents with great regularity and his calm demeanor is and always has been an anchor in the extreme tidal fluctuations of City staff and local politics.  I will forget many and want to apologies in advance for missing some steady participants!

From the past… Member of the CIWHA board and Seawall Team

We owe a debt of gratitude to:

From the past and still active

Current members of the board who have been around for years like Tom Shideler, Matthew Steinorth and Keith Beckwith who document, volunteer and jump in whenever and wherever needed and kept the membership active and new members of the board Mike Hass and Alison Gabel have been doggedly making sure work on landscaping is not lost in the mix!

We also want to thank our District Councilman Bert Perello and  the City Manager Alex Nguyen for prioritizing this and Public Works Rosemarie Gaglione and Jeri Cooper and Omar Ortiz for pushing ahead with what can be done in the as is state of our budget. And Mayor Flynn and City Council for hearing us and voting unanimously to approve!

Editor’s note: The author of this article is a Mandalay Bay homeowner.

The passing of this resolution by City Council means that “ALL” repair and maintenance work will be better funded! This agreement is NOT tied to the formation of a CFD. That is a big win!

The City is also working on grant funding to offset costs.

Once an engineering plan is finalized and costs can be calculated the City will do outreach with the Homeowners regarding funding and costs.

There will be no increase in your property taxes until the homeowners/residents of Waterways 1 (Mandalay) vote to approve a new assessment district or funding mechanism.

Is the Seabridge development going to participate in the homeowner assessment?

I believe this seawall project only applies to Mandalay Bay

Oxnard must still have the calculator used by Mr. Throop in the City of Oxnard vs. Aaron Starr Measure M wastewater case.