The council had trouble reaching a decision to to fill the seat by appointment instead of a special election (see meeting agenda item L-5 report below), opining that the election would be too expensive, that representation of the district was urgent and that the remaining term wasn’t long enough to make it worthwhile.  They opened up applications for the position until January 20 and got these 13 applicants (not that Tia Hartley’s name is misspelled below): 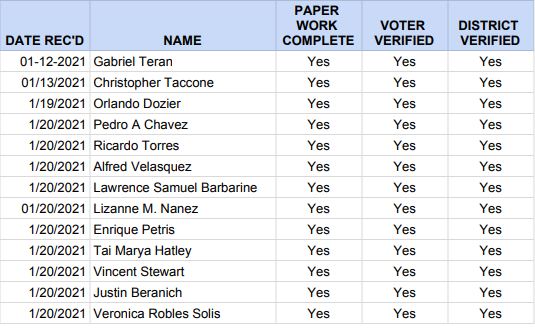 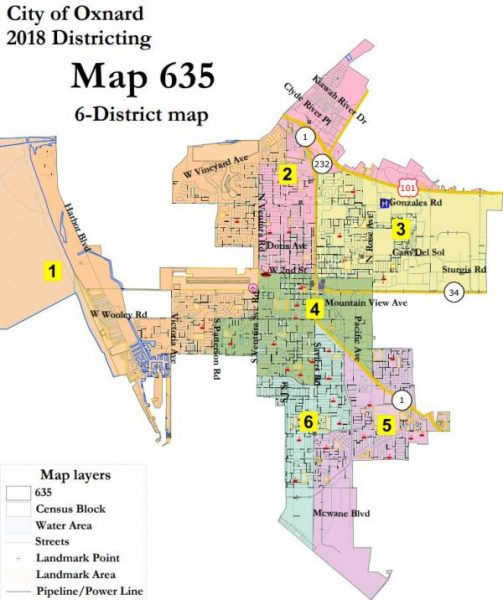 This is to fill the vacancy of mayor ProTem/District 2 Council Member Carmen Ramirez.

City Atty Stephen Fischer said the vacancy arose today and there are 2 default options- special election or appointment and adopt an ordinance to enact this. Appointee would only hold the office until a special election, which can’t occur before 144 days. He says election can only be done in March or November, but didn’t say why. Therefore it would have to be in November, he reasoned.

He says the county told him that a special election would cost $93,000 plus legal publication costs. He says victor couldn’t be declared until December 2022. Surely he meant 2021?

He added that there is no set procedure for making an appointment. He says some other cities call for candidate applications. He suggests leaving that open until January 20, 2021.

A third option could use the proposed ordinance to appoint an acting Council Member to serve until a special election could be held.

Perello- how many people are in a district? Fischer- will be updated with census numbers. District 2 population now estimates at ?

Gabriel Teran- Chair for Fremont South and District 2. Sent letter to council today. I support an appointment. Elections code won’t allow election until November. Says too expensive. Says they can’t go without representation that long. Only a one year term.

Daniel Chavez- Agrees with Teran. About 14-16,000 residents/district. Would be without a representative nearly a year. Wants option 1 appointment. Gov Newsom appointed replacements for Secretary of State.

Manuel Herrera-Want Option 1 appointment. Lives in District 2. Same arguments as Chavez. Democracy says should be an election but sometimes there needs to be an exception. Special elections lead to low voter turnout (appointments are zero).

Doug Partello- Wants option 3 appointment followed by special election. Fiscal responsibility is important, but voting is part of our democracy. Bert Perello is a precedent. No complaints then. Must be decided by the voters. Cost and time are less important than  this.

Andriana Robles- Employee of CSUCI. Live in Orchard Park. Wants a special election. It is our right to elect our representative. I was taught that our vote is our voice.

Alicia Percell- Lots of talk about districts having reps of their own choosing, so why not now? Whomever you appoint would have an incumbency advantage. People think that Gabe Teran is being “positioned’ for appointment. He is just another rubber stamp who represents you rather than the residents. If the idea is to appoint one of your friends who thinks like you, this is not the way/. 94% of votes are now unanimous.

Armando Delgado- He says appointment doesn’t take away voting rights. Most incumbents are re-elected. Have confidence in elected representatives to decide. Local races are low information races. Election too expensive.

Francisco Dominguez- People need to be represented. He is a resident of District 2. Option 3 – appointment followed by election, is best option. Democracy. Can’t put a price on it.

Perello- Won in a special March election. Someone should resign their position if running for another one. He said his situation was “unique.” He said we have 5 districts and one mayor (last we heard there were 6). Three neighborhoods were severed by new districts. 39,000 people per district- larger than most VC areas. He came up with a homey pizza slice analogy to attempt to explain representation. Needs to be a rep for this district. Much blood was shed for votes and freedom. Should be a short term appointment and Nov. special election (option 3) Vote is the most precious thing you have. Wants to make a motion.

MacDonald- District 2 needs to have a voice. Whether is by appointment or election, they will get it, he claimed. It would be done in open session. Politicians act differently in campaign mode. He was implying that they won’t do as good a job thusly. Says that 15-20 incumbents ran countywide and 7 lost. (all won in Oxnard). Wants option 1 appointment.

Lopez- We don’t only represent our districts. Wants Option 1 appointment. Claims an open process. Another election is too much of a distraction. You can campaign for an appointment.

Basua- Glad we went to districts, but we vote for what is best for Oxnard. I believe your vote is your voice. Don’t want to take that away from District 2. Go with special election regardless of the cost. Wants Option 2 special election.

Madrigal- Perello said incumbents vote outed in 2012- it was 2010. District 2 is the largest district, because Riverpark developed after the census. Wants Option 3 appointment followed by special election. Perello and I would not have been appointed by the council. People voted us in. Lopez elected to a position in June and ran again in November.We were all taught in elementary school to vote.

Zaragoza- Wants option 1. Says we represent entire city. Claims priorities make this necessary but couldn’t explain why it would be better than Option 3. Claims he had numerous calls (90%) for Option 1. He claims that in another neighborhood, no one wanted  a special election. He says it’s almost like an election. Residents can apply for the job.

Perello Option 3 is a reasonable compromise. It offers an appointment and a special election.

Vote Option 2:  2-4 no, with MacDonald and Lopez dissenting. Failed.

They have no idea how to proceed. Fischer says may have to move on and come back with another option at a future meeting.

Fischer says anyone who voted no on options which lost could suggest a reconsideration.  But no one wanted to reconsider.

Nguyen says election code says they MUST pick one of these options.  Fischer says you could propose an ordinance, including what was proposed or make it a policy that special election must be called, or that petitions must be filed.

MacDonald- Not a fan of #3, but we are at loggerheads. Willing to compromise on it.

Voted again on reconsidered Option 3-  Approved 5-1 with only Lopez dissenting.

So Oxnard will appoint a Council Member within 60 days and hold a special election for the position in November. There is not yet a set procedure for this, so the City Clerk and City Attorney will be busy.

Comment from Alicia Percell, Professional Registered Parliamentarian:
At the point in item L.5 when none of the available options had won a majority vote, there was confusion about what the options were.  The city attorney advised that someone could make a motion to “reconsider” one of the options to be able to vote on it again.  He correctly deduced who was eligible to make such a motion.  Mr. Fischer seemed to be under the impression that because a motion to reconsider has strict time limits on it and could not be made at the next meeting, the council was stuck with having to make a decision that night or never.  The council actually had more flexibility than that, however.  It’s true a motion to reconsider could not be made at the next meeting, but that’s because it just wouldn’t be necessary.  Once the council starts a new future agenda, it is in order to “renew” the motion, which is to just make the same motion again as if it were new, even if it had failed when it came up on the previous agenda.  The council did have the option of placing it on a future agenda and starting over from scratch again.  (See Robert’s Rules of Order Newly Revised, 12th ed., 10:26(3))
When Mr. MacDonald indicated a desire to reconsider one of the motions, there should have been one more step.  It is a motion to reconsider, and they should have first taken a vote on his motion to reconsider, since it requires a majority agreement to revisit the prior vote.  One council member on his own can’t force a revote.  I don’t recall the council having taken that extra step, though it seems likely the majority would have agreed to reconsider had they done so.