Oxnard Planning Commissioners Side with Port After Heated Debate 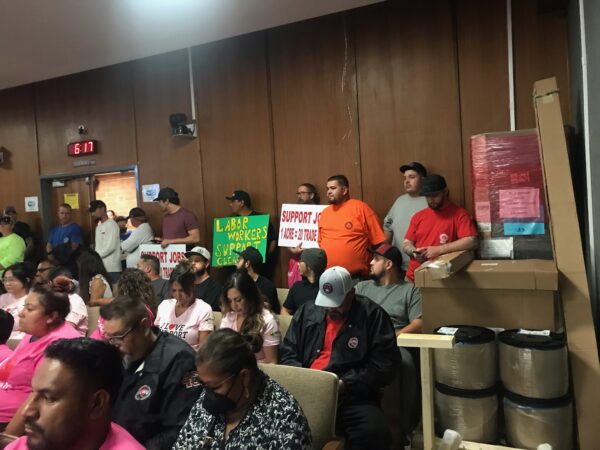 Approximately 200 people attended the highly contentious Oxnard Planning Commission meeting and dozens more attended virtually. Several labor unions were represented at the meeting as well as social justice activists and environmental groups such as CAUSE, MICOP, the Sierra Club, and Wishtoyo Chumash Foundation. Many youths also attended and addressed the Commissioners. Lines were clearly drawn between those who support the Port with its promise of jobs and progress and environmentalists, biologists, and social justice advocates who oppose the further industrialization of South Oxnard, an incomplete FEIR and possible negative health impacts. The National Resources Defense Council pointed to legal flaws in the FEIR. Several biologists expressed concern over the lighting in the project and that the FEIR failed to consider the Migratory Bird Treaty Act.

CAUSE condemned the FEIR for its failure to review long-term plans for the project after 3-5 years. Records show that planning documents from the Port of Hueneme call for larger expansion projects, including contracts, and grant applications to expand to a 250-acre storage location further down Hueneme Road. However, this information was omitted in the FEIR and constitutes an illegal practice known as “piece-mealing.”

The Port emphasized that this project is temporary and will create jobs. When Commissioners asked Kristen Decas, the CEO and Port Director, for an exact number of direct and indirect jobs, she reported 14 and 16 respectively and added that the project would create hundreds of jobs for union workers.

Commissioner Steve Nash, who once worked at the wastewater treatment plant on Perkins Road, sided with Hueneme teacher Cori Raffaelli who described the environmental view her students see every day along Perkins Road: a wastewater treatment plant, a papermill, a Superfund site and now a parking lot. Nash also voiced concerns over traffic congestion that would result from the construction of the site.

Commissioner Anna Zielsdorf expressed her desire to save the resources. In the end, Chair Daniel Chavez chastised both sides for not working together and admonished speakers for invoking the name of the late Carmen Ramirez to promulgate their position.  He added that egos needed to be set aside.  In the end, Vice Chair Ronald Arruejo moved to approve the project with two amendments, one to address the automated sprinkler system for the landscaping and the other to address costs associated with the cleanup of the project after it expires, and Katherine Connolly seconded the motion. In the end, the project was approved by all five Commissioners.

I have to say respectfully that a good alot people putting interest in this need to take the minds out of their wallets and heads out of there asses. Some many sides are of measures to this situation and some how the only views pointed are not even close to a problem then made to be curtains to hide the real unjust